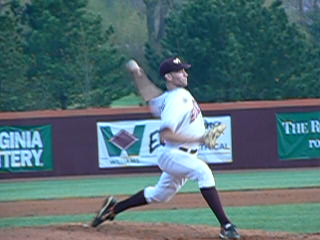 Those of us following the draft were a little surprised to see Evan Frederickson's name called with the Brewers' second choice in the supplemental round, but the more I read about, the more I like him. He's a 6'6" LHP from the University of San Francisco that throws in the high 90's, something very rare in a portsider. He was gracious enough to answer a whole bunch of my nosy questions.

BCB: To get the obvious out of the way, how exciting was it to get drafted?

EF: It was very exciting. Obviously. (laughs) I was expecting a call or something before I actually got drafted, but the first time I knew was when they called my name [on TV].

BCB: Did you have as hard a time as we did figuring out what name Bud Selig was saying because Peter Gammons wouldn't shut up?

EF: (laughs) Yeah exactly. I wasn’t sure what they said so I looked it up online and then I knew.

BCB: Do you plan on signing?

EF: I have every expectation to sign soon, but I'll leave it up to the Brewers to announce it. It wouldn’t be right for me to say without them announcing it first.

BCB: Any idea when that announcement will come?

EF: Very soon, I would think.

BCB: Did you consider signing with the Twins when they drafted you out of high school?

EF: Well, that was very different. That was the 27th round and I had no intention of signing then, especially since I was coming out of high school.

BCB: In another interview, you said that while struggling during your two years at Virginia Tech, you wondered if you made the right decision.

EF: Yeah, I didn't throw like I was capable of at Tech, and I knew that, so that's why I transferred.

BCB: So why did you transfer to San Francisco specifically?

EF: I was looking for a place to transfer the summer after my sophomore year at Tech, and after talking to my summer teammate and friend Brian Anderson, [San Francisco pitching coach] Greg Moore flew out to see me pitch. I instantly hit it off with him and had a long conversation after dinner the night before my next start. I threw really well the next day and decided right after the game ended that San Francisco was where I wanted to go.

BCB: What did you like so much about Coach Moore?

EF: He has a very upbeat, positive, and confidence-building personality. I felt more positive and confident in my next start that summer just from talking pitching with him the night before.

BCB: What specifically has he helped you with? I noticed your control has steadily improved each year.

EF: Yeah, he has definitely helped my command a lot, my approach to training and pitching. His work ethic’s led me by example and I train harder than I ever thought I could now. And I'm planning to work even harder for the Brewers now that I'll have more time to devote to baseball and expert coaching and instruction.

BCB: I would imagine the Brewers have some ideas about how to further refine your command. Have they shared any specifics with you?

EF: No, no specifics yet, but I do know they want me out for spring training ASAP to start working.

BCB: Do you know if you’re going to Helena?

EF: Yeah, I’m going to Helena, but Arizona first for about a week of training, and they want to give me a physical. Just a technicality. My grandfather actually grew up in the Helena area and is excited about me playing there.

BCB: I know you knew the Brewers were interested, because you had a great workout for them, but what other teams were considering you?

EF: Well, I threw workouts with the Giant and Orioles also, so I knew they were interested. The Royals, Padres, and Braves were a few others I knew were really interested.

BCB: Were you surprised at how high you were taken?

EF: Not really. I knew I was probably going second round, so the end of first round in the compensation was awesome.

BCB: Did you know you're the first college pitcher Jack Zduriencik has ever taken before the third round?

EF: No, I didn't know that. He takes high schoolers or position players historically?

BCB: Yeah, lots of prep pitchers. A lot of them have gotten injured.

EF: I’ve heard great things about the Brewers’ ability to find talent and help prepare them for the Majors, so I’m really excited to get out and start working.

BCB: They're a very well-run organization, but 18-year-old pitchers unfortunately have a tendency to get injured no matter how well you handle them.

EF: Yeah, it helps going through a whole college season where you can learn the work it takes to keep your arm fresh. I definitely feel better prepared now after going to college.

BCB: When you were drafted, a lot of people compared you to another former San Francisco pitcher, Aaron Poreda, because you’re both tall lefthanders who throw hard. Talking to your coaches, have they told you what you do differently from him?

EF: They tell me I like to throw my breaking stuff a lot more than he did. My slider has always been an out pitch for me as well as my fastball.

BCB: How hard do you throw the slider? Are we talking Randy Johnson here?

EF: It’s in the low 80’s, but breaks two planes. Some people say it’s like a hard slurve. My cutter is high 80's with late break in to righties.

BCB: Are you going to keep throwing all of those pitches as a pro?

EF: Yeah, but I’m expecting they’re going to help me work on all of my pitches and possibly start throwing a new pitch. I don’t throw my two-seam much now because my four-seam has lots of movement, so that’s what I’ll work on a lot, trying to sink it.

EF: Basically refining the two-seam, getting more sink, and working a lot on the changeup. I’ve experimented with a split before so that might be something.

BCB: Are there any major league pitchers you pattern yourself after?

EF: No, I really have never tried to throw like any major league pitcher in particular.

BCB: So who did you cheer for growing up?

BCB: As long as you're not a Cubs fan!

BCB: Tell me something about yourself outside of baseball, a little personal trivia, something you want Brewers fans to know.

EF: I was my high school champion at ping pong. All four years they had a tourney, I won. When I’m not training or working out, I like to hang with friends and play poker.

BCB: It's great. Bob Uecker is standing off to the side refereeing and wearing the shortest shorts possible.

BCB: Hardy’s dad was a really good tennis player, and so is he, so apparently he's quite the ping pong champ. You'll have to dethrone him.

EF: (laughs) Yeah, I look forward to that.

BCB: Well, we really appreciate you taking the time to talk to us. Best of luck, we’ll be cheering for you.

EF: No problem. Thanks.