Share All sharing options for: Brew Crew Ball Hits Up the Stosh 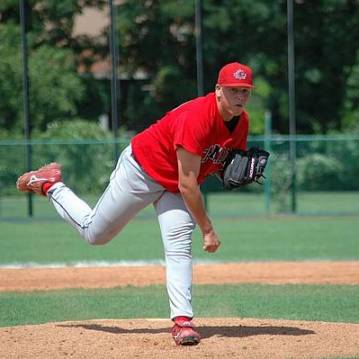 Despite possessing a name that would make many Milwaukeeans proud, Brewers' 16th-round pick Stosh Wawrzasek is actually from Langley, British Columbia. He's a burly right-hander and was teammates with first-round pick Brett Lawrie on the Langley Blaze. Give it up for Stosh!

BCB: How did it feel to be drafted?

SW: Great, since it’s been my dream ever since I was a little kid to play in the Major Leagues.

SW: He really is. He worked very hard to get to where he is, and, well, it paid off for him.

BCB: Are you close with him?

SW: I don’t hang out with him outside of baseball, but I always talk to him [online].

BCB: Do you think you'll sign with the Brewers and be his teammate again?

SW: At this point, I’m still talking with my parents and my agent, so we’ll come to a decision soon.

BCB: What will you do if you don't sign?

SW: I would go to a JUCO. New Mexico.

BCB: Is Florida International off the table?

SW: No, I’m still considering FIU as an option, but being a pro ballplayer is something I really wanted to pursue.

BCB: From what I read, you were expecting to get drafted a little higher.

SW: I was, but it doesn’t really matter. I still got drafted, and I can say I was one in 1500 people that did, in the world.

BCB: Did you know the Brewers were interested in you?

BCB: What other teams were interested in you before the draft?

SW: Arizona, the Twins, and the Braves showed the most interest, I think.

BCB: Growing up in BC, did you follow any particular teams, or just individual players?

SW: The Boston Red Sox were my favorite team, but I never really followed a team or player.

BCB: Both [Brewers GM] Doug Melvin and [Assistant GM] Gord Ash are Canadian, and the Brewers have a long history of drafting Canadian players. Does the large amount of fellow Canadians make you feel more comfortable with the organization than you might otherwise?

SW: Definitely. Six kids from the junior national team were drafted by the Brewers this year, and I played with them all.

BCB: Besides Brett Lawrie, which of your former teammates has the best chance to succeed?

SW: They all do, in my opinion. They’re all good ballplayers.

BCB: Do you know [Brewers farmhand and BC native] Taylor Green at all?

SW: I’ve met him, but not personally.

BCB: So, what do you throw?

SW: A fastball, curveball and a changeup.

BCB: How about your curve?

BCB: Is that your strikeout pitch?

SW: In a way, yes. I can use my fastball as my out pitch where I play now and my curve as a set-up pitch. But my curve is an out pitch.

BCB: According to the scouts, your changeup is a developing third offering.

BCB: How well do you do at mimicking your fastball's release point and arm action with the change?

SW: Quite well, I’ve been told from my catchers.

BCB: Can you hit pretty well?

SW: I like to think I can hit, but I haven’t swung a bat in awhile. If I practice at hitting I could get a lot better.

BCB: Are you glad you were drafted by an NL team then?

SW: Yeah, now I can show up to batting practice and say I need some swings.

SW: I’m not a Prince Fielder. Yet. (laughs) I think I have some good power.

BCB: Ever beat Lawrie in a home run derby?

BCB: Give us a little bit of a scouting report on him. What are his strengths, and how do you get him out?

SW: His power is a big strength. I’ve never pitched to Brett, so I’m not one hundred percent sure how to get him out.

BCB: Seems like it's tough to do these days. Were you there for the five-home run doubleheader?

BCB: It's already attained near-mythical status. What was your best outing ever?

SW: When I was in Quebec, I pitched the final gold medal game. 15 strikeouts, three hits, no runs.

BCB: When was that?

BCB: Is baseball in Canada expanding? Do you think we'll keep seeing more and more prospects coming out of the country?

SW: Definitely. Lots of good ballplayers come out of Canada.

BCB: What other sports did you play growing up?

BCB: No hockey? You're really killing the Canadian stereotype here.

SW: A little, but what can I say? I loved baseball ever since I was born.

BCB: Next you're going to tell me that you don't snowboard or wrestle cougars.

SW: (laughs) I’ve snowboarded a few times, but that’s it.

BCB: Well, thanks for taking the time to talk to us. Good luck in the future, we hope you sign, and we look forward to cheering for you.

SW: Thank you very much.