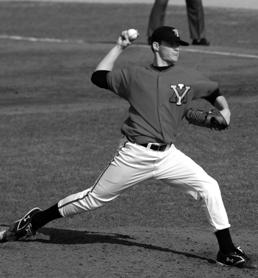 In 2007, Michael Bowman posted an awesome 110/26 K/BB in 99 innings for the Virginia Military Institute Keydets. He fell off just a bit this year, managing an 82/25 ratio in 91.7 innings, but as you'll read below, he was just following orders.

BCB: So you've signed already, right? Are you in Arizona now?

BCB: How's the weather? I was there for the Fall League and you couldn’t go out of the shadows

MB: Yeah, it’s hot. Something I’m not used to for sure.

BCB: Are you from Virginia?

BCB: Did you always want to go to VMI?

MB: No, I actually never knew about it when I was younger. I had no idea I would end up there, but I was glad to have spent time there, that place taught and did a lot for me.

MB: Well, it’s not a military academy, it’s not like Navy or Army, but it’s different [from a regular university]. A lot of structure. You’re always busy doing something.

BCB: How is it connected to the military?

MB: You can commission [into the military] if you want to, but to any branch, not just one specific branch.

BCB: But you aren't required to serve?

BCB: Scout him a bit for me. What are his strengths and weaknesses as a player?

MB: I mean, he loves to compete, always goes out there with a can't-lose attitude. He’s also not afraid to get in your face and tell you you’re not performing like you’re supposed to.

BCB: Is he a good defensive catcher? There seems to be a dearth of those in the Brewers’ system.

MB: Yeah, he's got a good arm behind the plate too.

BCB: Do you know any of the other guys the Brewers drafted?

MB: I’ve played against Evan Frederickson, but I don’t know him personally.

BCB: Did you know anyone else in the draft well?

MB: Yeah, I've played with a bunch of guys that were drafted.

MB: Matt LaPorta is the best hitter I've ever faced.

BCB: Good thing you were drafted by the Brewers then! You hopefully won't have to face him again.

BCB: How did he do against you?

MB: He hit a bomb off me. Thought I struck him out one time, but it was a walk. Oh well.

BCB: Are you glad you got drafted by an NL organization so you'll get to hit at the big league level?

MB: Yeah, I may not be able to hit, but I can have fun trying.

BCB: Have you ever watched Ben Sheets bat? He openly admits he hates it.

MB: (laughs) I actually watched him pitch against the Braves a year or two ago, in Atlanta. He dealt; I definitely like what he does on the mound. Definitely can learn from watching him throw.

BCB: Is your stuff similar to his? What do you throw?

MB: No, he has a hammer; I throw a slider. A fastball, slider, and change.

MB: Low 90's, I guess. I really try not to pay attention and worry about that stuff.

BCB: Can you describe the movement on your slider?

BCB: What's your out pitch?

BCB: Your strikeouts were down a bit this year compared to last; were you pitching to contact more?

MB: Yeah, at VMI our pitching coach wants us to get them on or out in three pitches or less. Wants us to attack the hitters. He wanted us to not shy away from contact.

BCB: Do you think you're off to Helena after a bit of training in Arizona?

MB: Yeah, that’s where I was told I’m going.

BCB: Were you pleased with where you were drafted? Were you expecting to go higher or lower?

MB: I was expecting to go higher, but I’m pleased with where I am and the organization that took me and couldn't be happier right now.

BCB: Who else was in on you?

MB: The Braves, Sox, Tigers, A's, Mets, Rangers, and some others, I think.

BCB: You said you went to a Braves game earlier. Are you a Braves fan?

MB: I’m a Brewers fan now, but yeah, Braves fan my whole life, being from Richmond and growing up with the R-Braves.

BCB: Is there anything else you want Brewers fans to know about you?

BCB: Well, you have a lot of new fans. We wish you the best of luck.

MB: Thanks, I appreciate it.