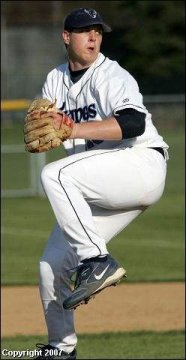 Right-hander Cody Scarpetta isn't technically a 2008 draft pick, but he might as well be. He was highly touted in 2007, projected to go in the first three rounds out of Guilford High School in Rockford, IL, thanks to his 92-94 MPH fastball and what Baseball America called a "true power curveball". However, due to injury, Scarpetta fell to the Brewers in the 11th round (coincidentally, the Brewers also drafted his father, Dan Scarpetta, in 1982). Just recently recovered enough to resume throwing, Scarpetta has joined the 2008 draftees in Arizona. He's one to watch this year as he makes his Brewers debut.

BCB: Your injury was a ruptured tendon in your hand, right?

BCB: You actually injured it more than once, didn’t you?

CS: Well, the injury is a very rare one in baseball, so when I felt a little pain in March, I didn’t think much of it. So I kept on pitching until late April, when the tendon gave and needed surgery. Then in late August it unfortunately happened again.

BCB: All told, how long were you unable to throw?

BCB: That's a lot of free time. What did you do with yourself?

CS: You’re telling me. I just ran and tried to put myself in a good position to sign, really. A lot of rehabbing and therapy, really.

BCB: After you reinjured your hand, the Brewers voided your contract and re-signed you for a lesser amount. Were you angry about that?

CS: I would think anyone in that situation would be. It’s not a good one to be in.

BCB: How does your hand feel now?

CS: Right now it feels good. I threw my first bullpen the other day and there were no problems, so hopefully I can keep progressing up to game speed.

BCB: Has the injury affected your stuff at all?

CS: I don’t think I would be able to tell if it’s affected my stuff until I start games. But my fastball looked and felt good in the pen, so that’s a good start.

BCB: Can you describe your stuff?

CS: I throw a hard, heavy power fastball down in the zone, a hard, tight downer power curve for an out pitch, and a developing change that I can throw for strikes.

CS: Yeah. (laughs) I already got a taste of that. They said that they feel it’s the best pitch behind a fastball, and they want me to have a good one.

BCB: Are there any particular Major League pitchers you pattern yourself after?

CS: I try to pattern Roger Clemens on the field because of his fierce competitiveness and the will not to lose.

BCB: Have you grown at all since the draft? How tall are you now, and what do you weigh?

BCB: Were you surprised that you lasted until the 11th round?

CS: I wasn't too surprised because I was injured, and I expected teams to draft kids that they wanted to get signed and playing soon in the top rounds.

BCB: How close did you come to going to Creighton?

CS: To be honest, I had planned on going to a JUCO if I didn’t sign after my surgery.

CS: St. Petersburg Community College, more so because I knew if I didn’t sign then it was because of my injury, and I thought at the time I would need a year to recover and prove that I was the same pitcher.

BCB: How close did you come to going there?

CS: Really close, actually, because the deadline was the 15th, and I was packed and ready to leave to for Florida early the next morning.

BCB: Did you know the Brewers were interested in you before the draft?

CS: They were at my games but didn’t make too much contact with me until the draft.

BCB: You're effectively coming in as if you were drafted this year. Do you know anyone from this year's draft class?

CS: Yeah, really I guess I am. No, I don’t; I guess there's a kid from down south Illinois.

BCB: Not only is he from your state, he has your name!

CS: I know. (laughs) He might have to go with his first name.

BCB: What do you like to do outside of baseball?

CS: I like to golf, fish, be with my family, hang out with my friends, play ping pong

BCB: Oh yeah? How good are you at ping pong?

CS: (laughs) I don’t know, I think I’m a lot better than I actually am. More so because I’m so competitive, but the guys here are a little better, I guess.

BCB: Have you played Evan Frederickson?

BCB: He's the guy from University of San Francisco that the Brewers drafted in the supplemental round. He said he was the ping pong champ at his high school, so you'll have to take him on.

BCB: So now that you're healthy, what's the plan?

CS: Stay on my throwing program until I'm ready for the games, which hopefully is in early July.

BCB: Do you expect to make it to Helena this year?

CS: Right now I have short term goals: to pitch and stay healthy for the season. Making it to Helena is definitely a long term goal I have for the season, though.

BCB: Well, we hope your luck turns around this year. We appreciate you taking the time to talk.