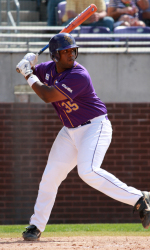 No, the Brewers did not just draft right-handed pitchers; there are a few position players salting the draft haul. One of the more intriguing of the bunch is East Carolina catcher Corey Kemp. Kemp hit .341/.444/.628 for the Pirates and was named second-team All-America for his trouble. Hits well and plays catcher? Sounds good to me.

BCB: Are you in Arizona now?

BCB: I hear the weather is brutal.

CK: True, thank God we practice in the morning.

BCB: So, did you know the Brewers were interested in drafting you before they did?

CK: Yes I did. [Brewers’ scout] Dan Nellum was in contact a lot.

BCB: What other teams talked to you?

CK: The Reds, Cardinals, and Cubs were the most interested.

BCB: Were you surprised at where you were drafted? Were you expecting to go higher or lower?

BCB: Did you know they were interested in your teammate, [42nd-round pick, shortstop] Ryan Wood, too?

CK: Yeah, probably more so than me.

BCB: Oh, really? Did they discover you while scouting him?

CK: Yeah, Ryan is a stud; no one knows how he fell so far. Not real sure really.

CK: Might be, be but he said he would sign anywhere before the 15th [round]. He was my two-year roommate.

BCB: So you're pretty good buddies with him then?

BCB: So if the Brewers are willing to give him top 15-round money, he might be interested?

BCB: How's his defense at short? You think he'll be able to stick there?

CK: For sure. Cannon for an arm.

BCB: How are you defensively behind the plate?

BCB: Did you just recently take up catching?

BCB: What did you play before that?

CK: Third base, but I was back and forth for about five years, just never really focused on catching till this year.

BCB: What are your strengths as a player?

CK: Work ethic and love for the game. I also believe I bring positive energy to a team.

BCB: Do you know yet whether you'll go to Helena when their season begins?

CK: Not real sure; we'll find out in the next day or two.

BCB: Do you know anyone in the organization?

CK: Sam Narron, who is in AAA, is from ECU, and I’ve talked to him on a few occasions. Great guy.

BCB: I'm rooting for him to make it back to the big leagues, just because the one game he was up with Texas a few years ago was so terrible.

CK: Yeah, he had a tough outing, but that happens. That's baseball.

BCB: As an African-American, does the presence of so many young black talents on the big league club make you more comfortable in the organization than you might otherwise be?

CK: I mean, that's great to see. I don't know if that makes me more comfortable--I've always been the minority on every team; mostly I was the only black kid.

BCB: Did you ever see being the only black kid on the team as a problem?

CK: No, not really. I didn't really ever focus on it, but I definitely always noticed.

BCB: Is that a problem to be fixed, or is just one of those things?

CK: I’m not sure. Baseball can get very expensive to play competitively; some summer teams charge $1000 to play in the summer.

BCB: How did you get into baseball?

CK: Most of my family is from St. Louis, so as a young kid I spent summers in St. Louis dressing in Cardinal red. Went to my first game and didn't eat for three hours, which was a record for me, and I begged my dad to sign me up. From that, game on.

BCB: Oh so you're a Cardinals fan? Well, better than the Cubs, I suppose.

BCB: Is there a Major Leaguer you pattern your game after?

BCB: Molina is primarily known for his defense, while McCann is mostly known for offense. Who do you identify with more?

CK: That's why I love to watch both--mixing the two makes the perfect catcher, and McCann's defensive skills are underrated.

BCB: So when you make it to the big leagues, we'll call you McYadi, yeah?

BCB: Do you have any favorite baseball books?

CK: Moneyball was interesting. That and Ball Four.

BCB: What did you take away as the message of Moneyball?

CK: Just that this is a business now, and that there is a whole other side to the game that is very statistical.

BCB: Do you get into statistical analysis at all?

CK: Nah, I just play the game as hard as possible.

BCB: Fans can’t ask for anything more. We appreciate the time, and we’ll be cheering for you.