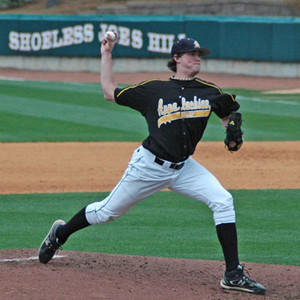 Brewers' 12th-round pick Garrett Sherrill is a 6'5" right-handed pitcher out of Appalachian State University. With a 45/30 K/BB in 35.7 innings this year, you might be tempted to peg Sherrill as another Dennis Sarfate-type player, but read his comments for a little insight into his numbers.

BCB: You're in Arizona now?

GS: Yeah. I got out here Monday.

GS: Oh yeah. In Boone it’s usually perfect around this time, 75, 80 degrees every day, so it’s a big change coming out here and being in 105-degree weather every day.

BCB: Did you always want to go to App State?

GS: No, I basically had a good many offers out of high school to go and play baseball. I narrowed it down to South Carolina, Duke, and App State. I thought that App State was the best fit for me because it gave me an opportunity to go in and play my freshmen year. At USC I might have been redshirted my freshmen year. It was also only a few hours away from home, which was a big plus.

BCB: You're from Kannapolis, right?

BCB: Did you go to many [Class A Kannapolis Intimidators] minor league games growing up?

GS: Not really; I was always at some kind of games though, whether it was my own game, high school football game, or legion games, et cetera. My dad was always taking me to some kind of sporting event.

BCB: What other sports did you play?

GS: Well, I played football, baseball, and basketball all four years in high school, and soccer my freshmen and sophomore years.

GS: Well, in high school I hit right at .540 my senior year, but once I got to college I kinda put down the bat.

BCB: Are you glad you got drafted by an NL team, so that you can swing the bat once you make it to AA?

GS: (laughs) I would be lying if I told you it didn’t cross my mind.

GS: Well, mostly this year I was a two-pitch guy with a fastball and slider. Fastball was anywhere from 88 to 93 and my slider was anywhere from 78 to 84. The slider was my out pitch and was what I got most of my strikeouts with. I thought at times my changeup was pretty good, but I rarely threw it because coming in as a closer I didn’t want to get beat with my third-best pitch.

BCB: The Brewers love guys with changeups. Have they talked to you about refining that yet?

GS: Yeah, they have talked about working on that.

BCB: Are they going to keep you as a reliever?

GS: I haven’t really gotten into that too much. My scout that signed me said that he thought that I would be kept there. But I’m not sure.

BCB: What kind of movement does your slider have?

GS: It’s a hard, late break. It’s not a straight-down break, but in between that and horizontal, I guess.

BCB: You struck out a ton of guys at App State, but also walked a bunch. Have the Brewers talked to you about any mechanical adjustments to improve your control?

GS: Well that’s the thing, my first 15 to 20 innings I had something like a 26 to 4 strikeout to walk ratio. But as the year progressed, the walks shot through the roof. I have really never had problems with walks until the last half of this year. I think some of the problem was due to a lot of usage out of the pen. But I know I’ll have improvements to make with my delivery if I want to become as consistent as I want to be. But no, they haven’t really said much about it so far.

BCB: Do you know anyone else in the organization?

GS: No, I knew of a few guys, Corey Kemp from ECU [East Carolina University] and Robert Wooten from UNC [University of North Carolina], but I didn’t know either one personally. Just knew about them because they also played ball in North Carolina.

BCB: Who's the best guy you played against?

GS: Oh man, it was nuts. I mean, I knew along with everyone at App that we had a great team, but I never imagined we would beat Michigan. I thought that we would give them a good game, but when we won that game it was madness in Boone.

BCB: Do you know [Appalachian State quarterback] Armanti Edwards at all?

GS: I mean, if I saw him on the street I would talk to him, but I mean, not outside the weight room. We are companions, I guess you could say.

BCB: I bet he'd be an okay centerfielder.

GS: (laughs) Yeah, you’re right about that; he is one of the quickest people I have ever seen.

BCB: Is there anything else you want Brewers fans to know?

GS: Hopefully you’ll see me on TV soon. (laughs) That’s what I’m here for, and I’m going to work till I get there.

BCB: We’re glued to the tube waiting for you. Good luck, and thanks for chatting.