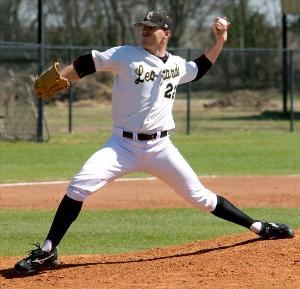 After the debut of big lefty Evan Frederickson, I'm excited to have another pitcher of similar imposing stature and handedness in the organization. Daniel Meadows is a 6'6", 230 lb. pitcher from Temple College, a junior college in Texas, where he posted a 58/12 K/BB in 59.7 innings this year. He was the second-last draft pick by the Brewers, but he's still (tied for) first in our hearts.

DM: Yeah, I flew in this morning, and I haven’t stopped since. The head trainer picked me up and took me to the doc for a physical.

BCB: You signed a week ago, right?

BCB: What did you do in the interim? How come you didn't go right away?

DM: There were some things I needed to take care of at home, and that’s when they scheduled the flight.

BCB: Do you know yet if you'll be going to Helena?

DM: Nope, tomorrow is my first day of workouts in Arizona.

BCB: Do you know any of your new teammates?

BCB: Did you know anyone who got drafted this year?

DM: Yeah, quite a few who I’ve played with over the years.

DM: I'd have to say Jose Duran, who was drafted by the Brewers in the sixth round. I played against him my freshman year in college, and seeing by what he did this year, the kid can flat out play.

BCB: Can you give us a little bit of a scouting report on him?

DM: He can pick it with the best of them, and his swing has gotten a lot better. He’s just a ballplayer.

BCB: So you think he'll stick at short then?

DM: I'm not sure; I know he probably pans out as a middle infield guy. Second or short, doesn’t really matter.

BCB: Who was the best pro prospect on your Temple team this year? It looks like Tristan Gaines had some pretty good numbers.

DM: Yeah, he had pretty good numbers, but he wasn’t drafted.

BCB: Did being the only player drafted from your team surprise you?

DM: A little bit; I think if there was going to be anyone else drafted, it would have been Tristan.

BCB: Where is he going to play next year?

BCB: So tell us a little about what you throw.

DM: Fastball, changeup, and they project my slider to be my best pitch. I just started throwing it late spring.

BCB: Do they project you to add any velocity, or have they suggested any mechanical tweaks to increase it?

DM: No, probably just hit the weight room and get a good throwing program going.

BCB: What kind of break does your slider have?

BCB: The Brewers drafted another big lefthander near the top of the draft, Evan Frederickson. Do you know anything about him?

DM: Yeah, he was at the pre-draft workout with me, and he just blew away the radar guns, reportedly throwing 96 to 98; had pretty decent off-speed stuff from what I remember.

BCB: Having worked out for them, you knew the Brewers were interested in you; what other teams were?

DM: The Brewers were it.

BCB: Were you nervous once it got to the 49th round?

DM: Not really. I had listened to the draft all day and gave up around the 45th or 46th round and quit listening. I found out when my phone started ringing off the hook.

BCB: Was it a tough decision between the Brewers and Texas Tech?

DM: Yes it was, but the Brewers made a great offer I couldn’t pass up, so I figured I would go ahead and chase my childhood dream.

BCB: What was your bonus?

BCB: Do you plan on going to school in the offseason?

BCB: You're a baseball player now!

BCB: So where are you from?

DM: Katy, Texas, outside of Houston.

BCB: Were you an Astros fan growing up?

DM: Still am, I love the Astros. I’ve been going to games ever since I can remember.

BCB: Well, at least it's not the Cubs, I suppose.

DM: (laughs) No one likes the Cubs.

BCB: In your dreams, you probably imagined pitching in the big leagues at Minute Maid--just not for the visiting team. Think that would be hard for you?

BCB: Who's your favorite Astro of all time?

DM: Either Bagwell or Biggio. I'd have to say Biggio.

BCB: Is there a major league pitcher you pattern yourself after?

BCB: The Brewers love changeups. I'm sure they would be thrilled if you pitched like Cole Hamels.

DM: Daniel. [Dan] is just what the scout who drafted me called me all the time.

BCB: Is there anything else you want Brewers fans to know about you?

DM: Nope, not really, just that I’m excited to get this all started and try to move up as quick as I can.

BCB: Well, good luck, we'll be cheering for you.

DM: All right, thanks.