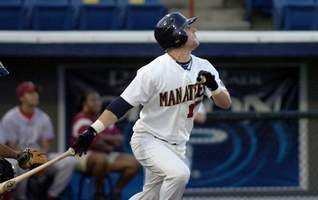 Stephen Chapman, in addition to being a really cool guy, is perhaps the best left-handed power bat in the system after a certain vegetarian. He's struggling a bit this year in the pitcher-friendly Florida State League for Brevard County, but anyone who can post a .277 ISO at Space Coast Stadium, the damp, windswept home park of the Manatees, is doing something right.

BCB: First of all, how do you feel about your season so far?

SC: Not too good. I’m not hitting nearly as well as I’m capable of. I do have some home runs and some triples, but my average is well below where it needs to be. Playing first base is also different, so I’m still getting used to that also. The second half just started, so I need to pick it up for sure.

BCB: Space Coast Stadium is a notoriously bad hitter's park, but you're actually hitting a lot better there. Any particular reason, or just random?

BCB: Would you say it's the toughest park to hit at in the league?

SC: In all honesty, yes, without a doubt. Every field that I’ve been to so far isn’t nearly as bad as Space Coast. The Tigers’ stadium in Lakeland is a big field, 420 in center and 340 down the lines, but the wind blows out slightly, and it has a nice playing surface so a hit is a hit--the wind wont knock it down and the infield grass won’t eat it up. But without a doubt, our field is the hardest to hit in.

BCB: You've improved your plate discipline this year, walking more often overall and improving your strikeout-to-walk ratio; is that something you’re consciously working on?

SC: Yeah, it’s something I try to work on. I’m still striking out this year, which needs to improve a lot, but the good side is that I’ve been walking more. There are only so many things you can do to improve your walk-to-strikeout ratio, but I’m trying. I just can’t miss my pitch and chase stuff in the dirt; if I do that, I’ll be all right.

BCB: When you were drafted, you had the rep of a guy who could handle any fastball but was still learning to recognize off-speed stuff; is the off-speed stuff what you're struggling with this year, or are you just slumping in general?

SC: I’m just slumping in general. I’m getting myself out a lot. The pitchers aren’t getting me out; I’m getting myself out. Not to say the pitchers here are not good, ‘cause they are, I’m not taking anything away from them, but my swing has just not been right this year. I played in the Hawaii Winter League with High-A and AA pitching, and I hit .294, so I can hit this level pitching; I just need to find my groove. I’ve just been a little off all year, just a little out in front, or a little behind, or I pulled my shoulder out just a little, or this or that. I need to have a little more luck, also. I was talking to Taylor Green about luck the other day, and I honestly have had one cheap base hit all season. Hopefully, [in] the second half I find my groove and things start falling my way a little more.

BCB: Do you see yourself as a .300 hitter? Is that the benchmark you set for yourself, the goal?

BCB: Just to throw another lefty power hitter out there, would you be happy with Adam Dunn's numbers? That is to say, low average but high production otherwise?

SC: Heck yeah! I don’t know a lot about Dunn, but his name has been in the news a lot lately, so I’ve heard a few numbers thrown around. What is he, a lifetime .240 hitter with 35 homeruns a year? Something like that. He’s been in the league nearly 10 years or something. If those numbers get me 10 years in the League, I would be happiest .240 hitter in the world. (laughs)

SC: Exactly, and he’s not making minimum salary either. My friend is David Ross, the catcher for the Reds, and he told me Adam is a great guy, so I won’t know what all this stuff in the news is about.

BCB: That’s cool that you know David Ross. You mean the stuff about the Blue Jays' GM talking shit about Dunn?

SC: Yeah, about Dunn not loving the game and this and that--it’s a bunch of BS. But yeah, David Ross and I live in Tallahassee and train together in the off season. He’s a great guy as well.

BCB: Did you meet him through training or did you know him before?

SC: I met him through training. We’ve been training together for about three years now. We both train at Titus sports Academy in Tallahassee, Florida.

BCB: Do you know any of the Brewers' big leaguers?

SC: Yeah, a lot of them. I mean, I don’t call them or anything, but I do know them. I got in some big league games this spring training and got to hang out with them a few times. I played with [Ryan] Braun in Helena, so that was pretty cool. Prince Fielder, Billy Hall, Mike Cameron--all those guys are hilarious in the clubhouse.

BCB: Being from near Tallahassee, I'm going to guess you grew up a Braves fan.

SC: I was actually born in Washington, D.C. and my family is all in Virginia and Maryland, so I’m an Orioles fan.

BCB: Oh cool, the Brewers are playing the Orioles right now. Have you been watching the series?

SC: (laughs) Nope, the life of a minor leaguer--we don’t have cable at the house. Gas is expensive, man.

BCB: If our blog ever makes money, we'll run a contest every month where we raffle off something and use the money to buy one minor leaguer cable. Or we could run an Adopt-a-Manatee program.

SC: (laughs) I’m sure that would be greatly appreciated. Adopt-a-Manatee would work, also (laughs).

BCB: So, you mentioned Taylor Green earlier. He came out of nowhere last year; what’s the secret to his success?

SC: He’s just a good player. He had a bad first year in Helena, so nobody really though much of him, and everyone thinks that he was a surprise, but he’s always been a great player. It just happens that his first year wasn’t that good.

BCB: Jonathan Lucroy just got called up to Brevard. He looks like a really good ballplayer too.

SC: Yeah, he’s good also. I don’t know much about catching, but I think he’s good behind the plate. He calls a good game back there. You don’t see a lot of three hole-hitting catchers, either. He can really hit.

BCB: Who would you say is the most likely guy on the team to make the majors?

SC: Tough question. Most likely would be Taylor Green. The guys who I think will make it for sure are Taylor Green, Lorenzo Cain, Darren Ford, and Jeremy Jeffress.

SC: Yeah, sorry, Lucroy also, forgot him. Chances are that all the guys won’t play for the Brewers at the same time, but I think someone with want them in the big leagues.

BCB: I was going to ask you about Darren Ford. He seems like he has a lot going for him: some pop, some patience, fastest guy in the system, but he's struggled at Brevard two years in a row. You think he's got Major League skills though?

SC: Yeah, for sure. He can run anything down, he can steal off anyone, he does have some pop, and he is learning how to bunt this year. When he puts it all together, he is amazing. He is the fastest player in our organization, like you said, but I would put money down that he is [one of the] top-five fastest players in pro baseball.

BCB: Have you seen the kid at West Virginia, Lee Haydel, run? He's supposedly the only guy that can compete with Ford [in the system].

SC: (laughs) He’s a nice guy, and nothing against him, but he can’t keep up with Darren. I’m pretty fast, and I raced Darren two days ago about 40 yards, and he gave me a 10-foot head start and beat me by four steps. It’s crazy--he doesn’t run, he floats.

BCB: Tell me about watching Jeffress pitch—is his stuff as good as they say it is?

SC: Yeah, it’s good--really good. Mid-90's fastball with a really good changeup. The only time he gets in trouble is when he leaves his fastball up in the zone, but that doesn’t happen too often.

SC: Good. I don’t know a lot about pitching, but I’ve seem him make numerous hitters look stupid up there. An 87 mile-per-hour slider is unfair.

BCB: He's had a couple starts this year where he dominated but then fell apart completely in one inning. What's going on in those?

SC: Leaving the ball up in the zone sometimes, trying to over-throw sometimes.

BCB: How about Zach Braddock? He's posted numbers almost as good as Jeffress', but doesn't have the same stuff.

SC: Zach has a good fastball, about 90, and he challenges hitters, which is awesome, but he gets in trouble sometimes. I like when Zach pitches--he goes after hitters. He doesn’t nibble and BS; he gives you what he’s got and if you hit it, you hit it.

BCB: How does he get in trouble sometimes?

SC: Getting too fired up and over-throwing. He gets too pumped up on the mound; he tried to do too much at times.

BCB: Back to you: tell me a little about learning to play first base. Did you ever play it before?

SC: I played it my freshman year in high school, just because they didn’t have one on varsity, and I was hitting so good at the time, but other than that, I’ve been an outfielder. First base is different, though. I have to say, I like the outfield better.

BCB: Has the team moved you to first just because of the crowded outfield position [in the system], or do they want you there long-term?

SC: Your guess is as good as mine. I hope it’s just because we don’t have anyone there right now in Brevard. I enjoy outfield better and am 100 times better there, but if I can get to the big leagues quicker by playing first base, I’m more than happy to play first.

BCB: It seems like the Brewers have a million outfielders: Cameron might be gone next year, but then you have Matt LaPorta, and then there’s Cole Gillespie and Michael Brantley at AA, plus Lorenzo Cain, you, and Darren Ford. And Mat Gamel might end up out there too.

BCB: What did you think of Gamel's defense in the Hawaii Winter League?

SC: Good, he improved his defense a ton this winter. He can just flat-out play.

BCB: Considering all the outfielders, maybe you should convert to catcher.

SC: I don’t think I’ll make it too far as a left-handed catcher, but hey, you never know.

BCB: So, who are your good buddies on the team and in the organization?

BCB: Tell some of those other guys to do interviews with me!

BCB: Well, that's about all I've got for you. Anything else you want Brewers fans to know?

SC: That’s about it. Hopefully I’ll get to meet them soon.

BCB: Good luck the rest of the season.