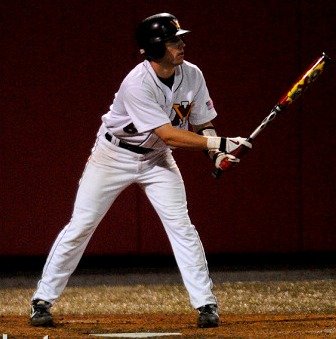 I originally interviewed Mike Roberts, the Brewers' 38th-round draft pick and a catcher from the Virginia Military Institute, a couple weeks ago, shortly after the draft. As you'll see, though, there's a good reason why I'm just publishing it now.

BCB: Have you decided whether or not you're going to sign?

MR: I’m still in the process of it. It’s a huge decision and I’m trying to make the best decision for me.

BCB: Do you have an advisor?

BCB: So you're just talking it over with your family and friends?

MR: Yeah, I’m really trying to get as many different inputs as possible, you know?

BCB: Does the fact that your teammate, [9th-round pick] Michael Bowman, already signed with the Brewers affect your decision at all?

MR: Oh yeah, definitely. I’d love to play with him at the next level, and we talked about it before the draft actually, about how it would be neat if we both went to the same team.

BCB: So you're buddies with him then?

MR: Yeah, we played on the same summer team last summer and then all this year.

BCB: Growing up near Richmond, were you a Braves fan?

BCB: Definitely. I wanted the Brewers to draft him.

BCB: Can you tell me a bit about him? Is he as good as they say he is?

MR: Yeah, he’s a nice dude. He throws hard, man, and he actually is pretty good in the infield. I don’t know if he will sign, though; he’s a [University of North Carolina] commit.

BCB: Yeah, he wanted top-15-picks money. If the Royals can sign him and Eric Hosmer, they'll have a great draft. But I’m still partial to the Brewers’. Did you know they were interested in you?

MR: Yeah, they had contacted me before, and I met with them.

BCB: Were they originally interested in both you and Michael Bowman, or did they come to see one of you and get interested in the other?

MR: I’m not really sure. I know they met with both of us on the same day before the season.

BCB: What other teams were considering you?

MR: I got letters from a bunch, and I took psych evals for the Indians and Brewers.

BCB: Were you disappointed with how late you were taken? Were you expecting to go higher?

MR: Nah, I didn’t care. So many kids that day didn’t even have their name called, so just to have that happen was fine with me. All you need is a chance.

BCB: Do you know anyone in the system?

MR: Nah, I know a few guys who went this year, and when Will Inman was with them I knew him. Country boy, he throws ched. Him and [former University of Virgina pitcher and 2008 Braves' 5th-round pick] Jacob Thompson on the same high school team…

BCB: So you played against him in high school?

MR: Nah, just with him at a showcase.

BCB: Who's the toughest pitcher you faced in college?

MR: Alex Wilson was pretty legit. He got hurt. though, and transferred from Winthrop to Texas A&M. The kid from Coastal [Carolina], Pete Andrelczyk, is nasty. He’s like 94 with an 88 mile-per-hour slider. The slider is filthy.

BCB: So if you go back to VMI for your senior year, and you don't get drafted next year, would you play independent ball, try to catch on as an undrafted free agent, or do something else?

MR: Try to catch on and then if that didn’t work probably go on to something else.

BCB: Michael Bowman said you're a pretty good defensive catcher. The Brewers don't have many of those.

MR: I have a lot of things I need to work on though. You talked to 'Bow? He said he likes it so far. He’s the man.

BCB: Scout him a little for me, since you caught him.

MR: He’s usually in the low 90’s and has good control of three pitches.

BCB: I asked him about his strikeouts dropping off from last year to this year, and he said your pitching coach preaches pitching to contact.

MR: Yeah, he does. To be a big time strikeout pitcher, you almost have to throw a ton of pitches each game, and I’d be willing to bet that if you could see his pitch counts from then to now they would be drastically different. That’s one of the things we needed him to do this year was go longer in games for us. We lost our closer, so we couldn’t afford for our starters to be out of the game by the 5th or 6th inning. I think 'Bow knew that for us to win he had to be able to go late into the games. ‘Bow has gotten a lot better at learning how to pitch and what to throw when and where.

BCB: But he has strikeout stuff when he needs it?

BCB: Earlier you said you had some things you needed to work on--what things?

MR: (laughs) To be honest, man, every aspect of my game. I have to get better at everything to be where I wanna be.

BCB: Is that something you think pro coaches can help you with?

MR: I mean, I’m looking at every option possible and listening to every opinion that I can get. I think it would be foolish to make an uneducated decision on the matter, and I want to make sure I’ve done my homework. It’s a good decision to have to make.

At this point, I thanked him for doing the interview and asked him to keep me posted on his signing status. Because he’s a nice guy, he actually did; this is from yesterday:

MR: I’m officially a Brewer. Got it done today.

BCB: Congratulations! What are the details?

BCB: What was your signing bonus?

BCB: So when are you going to Helena?

BCB: Well, congratulations again. We'll be cheering for you.

MR: Thanks a ton.