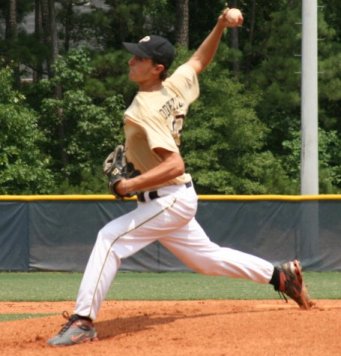 Jake Odorizzi was the Brewers' second pick on draft day, the 32nd overall selection from Highland HS in southern Illinois. After not allowing a single run this year (and breaking a metal bat), he was considered by some to be the top high school arm in the draft, quite a coup for the Brewers in the supplemental round. Hopefully he develops more along the lines of Yovani Gallardo (46th overall) than Mark Rogers (5th overall).

BCB: You've been pretty quiet since you got drafted, haven't heard much about you. I know you won state; that must have been pretty exciting.

JO: Yeah, it was pretty awesome.

BCB: What have you been doing since then?

JO: Just chillin’, takin’ it easy, relaxing till I go to Arizona.

BCB: When are you headed down there?

BCB: Do you know anyone in the organization?

BCB: What does an 18-year-old do when he suddenly gets a million dollars?

JO: I don’t know; I’m going to get a new car or something.

BCB: So, I heard you talking to Jim Powell on the radio about how the Brewers said they were going to take you with either the 32nd or 35th pick. Did any team tell you they were thinking about you before that?

BCB: Did you grow up a Cubs fan or a Cardinals fan?

BCB: Would you have been just the tiniest bit disappointed to get drafted by the Cubs then?

JO: No, I would’ve been okay with that.

BCB: You're supposed to say, "I hate the Cubs!"

BCB: So you don't mind playing for a division rival of your favorite team?

JO: No, I wouldn’t have cared.

BCB: Were you disappointed to slide into the supplemental round?

BCB: I think you said on the radio that if you went in the top 40, you were probably going pro.

JO: Yeah, that’s what my game plan was.

BCB: Are you going to keep both the slider and curve as a pro?

JO: The slider for sure. I may work on a new curve.

BCB: How do you want to change it?

JO: To a regular curve.

BCB: How is the movement on your current spike curve different from how a regular curve would move?

BCB: So basically you're looking for a tighter curve?

BCB: How hard do you usually throw?

BCB: How hard is your slider?

BCB: Some scouts thought you were the best high school arm in the draft. Did you ever see Alex Meyer or Tim Melville pitch? They're from nearby states.

JO: I’ve never seen either of them pitch, but I hear they are really good.

BCB: Who’s the best guy you played against?

JO: Walker Kelly. He had Tommy John [ed: Actually, Kelly ended up not having surgery]. He’s a lefty. Brings it at 94, 95. He’s going to [Texas Christian University].

BCB: How about the best hitter?

BCB: How did you do against him?

JO: I think he got a single.

BCB: What's the best way to get him out?

BCB: Speaking of swinging, you're apparently pretty good at it yourself. Are you glad you got drafted by an NL team?

BCB: What's your best position on the field?

BCB: Do you prefer playing shortstop to pitching, or vice versa?

BCB: How good of a pro prospect would you be as a shortstop?

JO: I think I could’ve made it. I had a great past two seasons hitting.

BCB: Well, you won't get to hit as a pro until AA, so you'll have to move up the ladder quickly.

BCB: Are there any big leaguers you model your game after?

BCB: That's a pretty good model, and a pretty new one too. What attracted you to him?

BCB: His dad has some pretty detailed theories on mechanics, about how to throw hard and stay healthy. Have you read what he has to say?

BCB: Has the team talked to you about changing your mechanics at all, or do they like the way you do things currently?

At this point, technology intervened, preventing me from asking Jake if his nickname was "Eggs".