A Conversation With Evan Bronson

Share All sharing options for: A Conversation With Evan Bronson 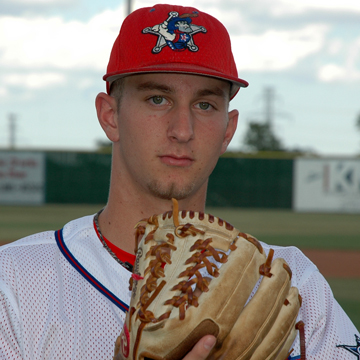 Evan Bronson was the Brewers' 36th-round draft choice, a LHP out of Trinity University in San Antonio, Texas. He posted some pretty scintillating stats for Trinity, but as Joe Morgan will tell you, stats ain't nothin' but numbers. With that in mind, I sat down with Evan to learn a bit more about him.

BCB: First of all, how exciting was it to be drafted?

EB: It was a really exciting feeling hearing the phone ring and having them tell you that you got drafted.

BCB: Did you follow the draft on the computer at all?

EB: I followed it a little bit during the day, just checking every now and then.

BCB: Were any of your friends or teammates drafted?

EB: Yeah, I had a good number of friends that were drafted, guys that I played with during the summer or in high school.

BCB: Of them, who do you think has the best shot at stardom?

EB: I think that Charlie Blackmon has a great shot at getting to the bigs.

BCB: Oh, you played with him? He’s a great prospect.

EB: Yeah, this past summer in the Texas Collegiate League.

BCB: So, did you work out for the Brewers before the draft? Did you know they were interested?

EB: Actually, I didn’t. I knew in the fall they were interested, but they weren’t the team that showed the most interest.

BCB: What teams did?

EB: The Braves, Pirates, and Rangers.

BCB: Where were they talking about taking you?

EB: Somewhere between the sixth and twelfth rounds.

BCB: Were you disappointed when you didn't go then?

EB: A little, but I think going in the draft in general is good.

BCB: So despite falling a little bit, do you think you'll sign?

EB: It’s possible; [the Brewers] are going to watch me up in the Cape [Cod League] for a few weeks. I would definitely like to sign.

BCB: Milwaukee probably didn't occupy many of your thoughts prior to being drafted by the Brewers; have you ever been there?

EB: I’ve been to a game, my uncle lives up there.

BCB: So where did you grow up?

EB: I grew up in Richmond, Virginia.

BCB: What teams did you cheer for?

BCB: Have you read Moneyball?

BCB: What did you think of it?

EB: I really liked it, and I definitely agree with a lot of it, 'cause I think college players are more ready to handle the minors.

BCB: Did you get any draft consideration coming out of high school?

EB: No I didn’t; I was small and didn’t throw hard at all. (laughs)

BCB: How hard do you throw now?

BCB: What else do you throw besides a fastball?

EB: A curveball and changeup.

BCB: How hard do you throw your curve?

EB: It switches between the change and curve, actually.

BCB: What's the velocity difference between your fastball and changeup?

BCB: So what determines which is your strikeout pitch on any given day?

EB: Just how it feels in the pen and what’s working for me at the time, also what type of hitters I’m facing, too.

BCB: The Brewers seem to really love guys with good changeups. Do you find it easy to match your fastball's release point and arm action with your changeup?

EB: Yeah, that’s what I’ve really been working on to perfect, ‘cause I feel like the changeup opens everything up when you’re pitching.

BCB: Have you watched Carlos Villanueva pitch at all?

BCB: He throws about as hard as you do, but he has a wicked change, so he manages to strike out a fair amount of batters. He's a lot of fun to watch when he's on.

BCB: Ben Sheets has also been playing around with a changeup. It's helped him when he doesn’t have a good feel for his curve.

BCB: Is there any Major Leaguer you particularly idolize or pattern yourself after?

EB: I really like watching Tom Glavine pitch, just the way he works hitters, and a lot of people say my motion is like Jeff Francis’.

BCB: Do you work outside a lot like Glavine does?

EB: Actually not as often. I really like to go inside to hitters and challenge them.

BCB: You posted some pretty ridiculous numbers at Trinity: 102 strikeouts and only 19 walks in 83 innings. That's pretty dominant. How did you perform in past seasons?

EB: (laughs) Thanks. My sophomore year, I did pretty well, and my freshman year, I was mainly a pen guy and would throw only an inning at a time.

BCB: Did you ever consider transferring to a bigger school?

EB: No, I didn’t. I got my exposure in the summer leagues that I played in.

BCB: How did you develop such good control?

EB: It just came. I didn’t start pitching until my junior year in high school, so I learned to work the zone since I didn’t have the velocity at the time.

BCB: Are you a good hitter?

BCB: Do you like hitting? Are you glad you were drafted by an NL team?

EB: Yeah, I think it will be fun. I know pitchers always love to take BP whenever they can.

BCB: How do you approach lefties differently than righties?

EB: I really like to work lefties in on their hands, then go away, and with righties, I like going away then coming in.

BCB: Okay, one last one. Tell us something about your life outside of baseball, a little trivia.

BCB: Is there anything else you want Brewers fans to know?

EB: Not really, I’m definitely excited to possibly be a part of the Brewers franchise.

BCB: We're excited to have you. Good luck.