Share All sharing options for: BCB Interview: 3B Taylor Green 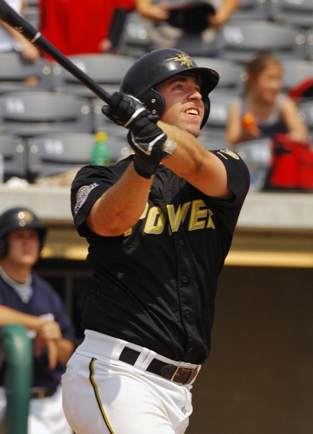 Taylor Green, an unheralded 25th-round draft-and-follow in 2005, exploded onto the Brewers' prospect scene last year, hitting .327/.406/.516 for West Virginia after barely making the team out of spring training. He hasn't stopped hitting since, currently sporting a .285/.369/.420 line in the very hitter-unfriendly Florida State League. Most famously, of course, he's rumored to be one of the players Cleveland has to choose from to complete the CC Sabathia deal, but unfortunately he knows about as much about that as we do.

BCB: Have you heard anything new about the trade?

TG: No, I haven't. I haven't really heard anything at all about the trade. All I heard was that my name came up in it, and that's about it.

BCB: I've heard that the players the Indians have to choose from will change depending on how well Sabathia does for the Brewers and how well the Brewers do the rest of the season. Do you know anything about that?

TG: No man, sorry. I don't know anything about the trade at all. I wish I did. (laughs)

BCB: How do you feel about your season so far?

TG: Our season is going all right so far, a lot of ups and downs, but we’re working hard to keep getting better.

BCB: What about you personally?

TG: My season has been going all right. You learn a lot about mental preparation in this league with all the rain delays, more than the wind, heat, or anything else. Trying to keep mentally focused during the delays is the toughest part.

BCB: Dealing with Space Coast Stadium regularly has to imbue you with some mental toughness, too. How frustrating is it hitting there?

TG: (laughs) Yeah. The stadium is a lot tougher for right-handed batters than left. I've seen tons of balls crushed to left field that just die at the warning track. I’m left-handed, and the ball goes pretty decently to right field; it’s just those hits to left-center in the gap that get ran down a lot more often.

BCB: Tell me a little about Jonathan Lucroy. He's right-handed and seems to be handing the FSL just fine. Is he the real deal?

TG: Yeah, he's unbelievable. He absolutely crushes balls. He's one of the best hitters I've ever played with.

BCB: All four of his homers have been hit at Space Coast, actually. Is he going oppo or is he just that strong?

TG: He has cut balls through the wind to left field and has gone oppo. It’s been really impressive to watch.

BCB: I interviewed Stephen Chapman earlier this year, and he said that in his opinion, you were the surest bet of anyone on the team to play in the big leagues. How do you feel about that, and who's your pick?

TG: I feel pretty honored for him to say that. We’ve lived together for two years now, so maybe he’s biased. (laughs) I think we have a bunch of guys on this team that will play in the big leagues, so it’s too hard to pick just one.

BCB: That's very diplomatic of you. How about you throw out somebody that maybe isn't getting talked about as much as a guy like you or Lucroy, someone whose stats don't really pop out at you but that you really feel has a chance to play at the highest level?

TG: I think Alex Periard is a guy who will have success at the highest level. He has a sharp, downward fastball that he throws about 91 to 94. He can hit the corners with it consistently and can throw his offspeed stuff for strikes.

BCB: Do you enjoy playing behind guys like Periard that generate a lot of groundballs and keep you on your toes?

BCB: It seems like Jeremy Jeffress is getting more grounders this year too. Is he doing anything differently from when you played with him at West Virginia last year?

TG: He is unbelievable. It’s amazing to watch him pitch. He’s keeping the ball down in the zone, so that is probably why he is getting more groundouts.

BCB: Speaking of playing the infield, and this of course ties in to the trade rumors, but do you prefer playing second or third? Which are you better at?

TG: I enjoy both of them. At third, I like how you are so close to the action, and at second, I really like turning the double play.

BCB: But you don't feel like you're significantly better at one or the other?

TG: No, they have me playing third right now, so I’m just working as hard as I can at that position. I’ll play any position I need to in order to make it, though. (laughs)

BCB: Had you played any third base before they moved you there at the beginning of last year? I get the sense that you ended up playing it because they didn't really have anyone else to.

TG: No, Garth Iorg came up to me with a couple of days left before spring training and asked me if I would play third. Of course I said yes, trying to make the West Virginia team.

BCB: You were kind of an overlooked guy in the organization prior to 2007, but then you had a great year and won the organizational Player of the Year award. Do you think you took the team by surprise?

TG: I’m not really sure; I try not to think about that stuff too often. I just try and go out there and do the best I can, and then hopefully everything works out.

BCB: Do you enjoy being in an organization with so many other Canadians? Did that help you get comfortable after being drafted?

TG: (laughs) I’m not sure—I’ve never really thought about that. I lived in California for two years before I signed, so I was pretty used to everything by then. It is nice to be able to talk to people from home about the hockey playoffs and everything, though. (laughs)

BCB: Do you know any of the recent Brewers' Canadian draftees? Brett Lawrie and [16th-round selection] Stosh Wawrzasek in particular are both from BC too.

TG: I know them a little bit, not very well though. Growing up I played with Brett's sister, Danielle, who is going to the Olympics as well, for softball.

BCB: Oh yeah? Did she strike you out?

TG: (laughs) We never played against each other. We still argue and wonder to this day about that though. Also, I know [2007 13th-round Ontario native] Chris Dennis through instructional ball and spring training, and we have the same agent.

BCB: Speaking of your agent, how do you feel about him having a blog? Some people were rather critical of him in the wake of the Sabathia deal for saying that Michael Brantley for sure wasn't on the table, and then quickly retracting it.

TG: I don't mind at all. That stuff is up to him. He’s done an outstanding job with me and that’s all I really know about.

BCB: How do you feel about sports blogs in general, particular when it comes to discussing yourself? Have you ever googled yourself to see what people are saying?

TG: I think sports blogs are great because it generates excitement. I’ve never googled myself, though, to see what people are saying. (laughs)

BCB: Well that's pretty much all we've got for you, man. We really appreciate you taking the time. Keep tearing it up, even if you end up as an Indian!