Share All sharing options for: BCB Interview: OF Erik Komatsu 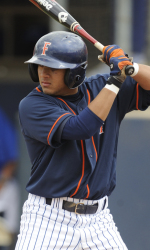 Cal State-Fullerton outfielder Erik Komatsu is quickly becoming a favorite of mine. I haven't seen him play, but his line at Helena (.326/.393/.516) conjures up images of a sweet lefty swing lacing liners into the gap. At only 5'10", Komatsu is short for an outfielder, but as his old coach said, "He may be 5-foot-10, but he hits like he's 6-4. He has thunder in that bat." Komatsu's will surely be among the most eagerly anticipated of all full season debuts next year.

BCB: Did you know the Brewers were interested in you before the draft?

EK: Yeah, I had a meeting with the area scout during the season.

EK: Pretty much everybody, but obviously not as much as the Brew Crew [was].

BCB: Did you draw any scouting interest back at Vanguard [University] or Oxnard [College], or not until you got to Fullerton?

EK: Not at Vanguard, some at Oxnard, a lot more at a powerhouse like Fullerton.

BCB: Do you think playing at a big-time program like Fullerton helped you improve your game at all, or did it just help you get exposure?

BCB: Were you expecting to get drafted higher, lower, or about where you went?

EK: I was expecting to go higher. I think everybody does, but I was happy after it was all said and done.

BCB: Where were you expecting to go?

EK: Anywhere from the third to the fifth round.

BCB: Do you think you fell a bit because of your relatively small size?

BCB: The Brewers also drafted your Fullerton teammate, shortstop Joe Scott, in the 42nd round. Can you describe his game? Have you heard anything about him signing?

EK: He's a team guy--does what's best for the team. He's more a defensive specialist but can surprise you sometimes with the bat. I haven't heard anything about him signing.

BCB: Has the team talked to you at all about moving up to West Virginia before the season is over?

EK: I haven't heard anything. I'm not worried about it. I'm just trying to go out and play the game everyday and have fun.

BCB: It seems like after a bit of a rough start, the H-Brewers are going pretty well now. You have some good pitchers on that squad.

EK: Yeah, all the guys are pretty sweet.

BCB: Which of your teammates have impressed you the most?

EK: Pitching-wise, probably [Trey] Watten; Brock Kjeldgaard is hot with the stick right now, especially after switching from a pitcher.

BCB: What about Watten has impressed you so much?

EK: He is business--he goes out and deals every time

BCB: Who has the best pure stuff on the team?

BCB: How about opposing pitchers that you've faced?

EK: Most of ‘em are pretty standard: throw hard and try to get a fastball by you. But [Rockies' 26th-round pick] Adam Jorgenson, my teammate from Fullerton, is doin' well. [Diamondbacks 2nd-round pick] Bryan Shaw from Long Beach has good stuff.

BCB: Do you have a nickname?

BCB: I was going to suggest "Nardcore". Not so much?

BCB: Fair enough. Who wins a home run derby between Kjeldgaard, Chris Dennis, and you? We'll throw Josh Romanski in as a dark horse, too.

EK: (laughs) Me and Romanski dominate, and the little guys lose.

BCB: Oh, one last thing: we threw your name in our Home Run Derby poll, and you got six votes! So you've got some fans.

BCB: Thanks for the time. Keep tearing it up.

EK: No problem. Thanks.