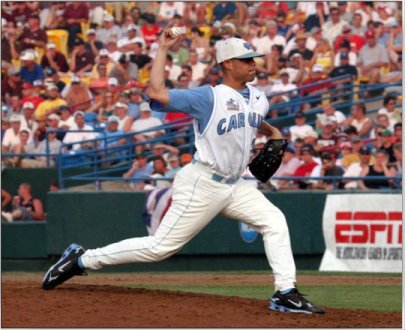 The Brewers made University of North Carolina closer Rob Wooten their 13th-round draft pick this June. Beyond his quality stuff, Wooten has a host of qualities that will aid him in trying to become a big league relief ace, including gobs of big-game experience, excellent leadership abilities, and a durable arm. Plus, as you'll see, he's already gifted with Major League quotability.

BCB: How's your season going so far at Helena?

RW: Well, so far, so good. It was a tough first week going through all the physicals and not being able to play, but now that I'm playing I'm enjoying myself.

BCB: The Brewers are renowned for their love of the changeup. Have they talked to you about learning to throw one?

RW: They haven't said anything to me about a change. I use my split as my changeup, and it's a great strike out pitch.

BCB: The splitter is a pitch that is notoriously tough on arms, yet you have a reputation as a real workhorse, and own the CWS record for most appearances. Are you concerned about the toll the pitch and your workload place on your arm?

RW: I've been throwing the split for some time now and haven't had any trouble with my arm so far. I hope I continue to stay healthy. I really like throwing the split, and it's a very tough pitch to hit. I'm not concerned with the workload. [The Brewers] will take care of me just as UNC did.

BCB: There's a couple potential relief aces on the team with you, Garrett Sherrill, and Mark Willinsky. Have you heard anything about getting moved up to West Virginia to spread out the work a little?

RW: I haven't heard anything yet, but my goal is to get to West Virginia before the end of the season. We have a lot of great pitchers on this team and I'm sure every one of them would love to finish the year in West Virginia.

BCB: Which of your teammates has impressed you the most?

RW: Well, not really one person, but all of the guys have a lot of potential and have a bright future ahead.

BCB: I've heard a couple people really tout Trey Watten, but his stats don't really jump out at you. What does he do that portends future success?

RW: I played with Trey this past summer in Cape Cod, and he has a lot of potential. You really can't look at stats and measure someone's success. He really commands the ball well and competes.

BCB: Had you played with any of the other draftees before?

RW: No, but played against some.

BCB: How did [Brewers' as-yet-unsigned 42nd-round draft pick] Ryan Wood look to you when you played ECU? Corey Kemp said that he was stud, and no one could figure out why he went so low in the draft.

RW: I thought he was pretty good.

BCB: Two of your UNC teammates, Alex White and Dustin Ackley, are big-time pro prospects. Can you give us a quick idea of what their games are like?

RW: Those two guys are unreal. I've really enjoyed watching them play and develop the last two years. Alex has improved more than anyone I've ever seen in a year. He was good his freshman year, but he was dominant this year. Ackley is the best hitter I've ever seen at any level. It's so hard to pitch to him. I'm glad he was on my team. They have a big-time career ahead of them, but I hope first they can keep it going in Chapel Hill.

BCB: Do you have a nickname?

RW: No nickname for me. I just go by Rob.

BCB: So were you expecting to go around the 13th round in the draft?

RW: Well, I was hoping top-ten and was told top-ten by some teams, but I'm very happy where I went and also getting drafted by the Brewers.

BCB: What other teams were most interested in you?

RW: Well, I heard from all the clubs, but I guess the Yankees, Orioles, Diamondbacks, and Brewers showed the most [interest].

BCB: Who were you a fan of growing up? The Braves?

RW: Yeah, the Braves, but really just enjoyed watching anybody because I just loved the game.

BCB: Who are your favorite players? Is there anyone you model your game after?

RW: Well, I used to model after [Roger] Clemens when I was a starter, but now as a reliever I'm not really sure who I model my game after.

BCB: Have the Brewers told you you're pretty much going to stay in the bullpen?

RW: So far that's what I'm hearing. I heard something during the [College] World Series that they may think about turning me into a starter, but I love what I do now and hope to continue as a reliever.

BCB: Speaking of the College World Series, you ran into the Fresno State buzzsaw. How did you take that?

RW: Yeah, they were hot. Seems like everything they did was right. You have to be hot and lucky to win the College World Series and they proved that.

BCB: Did losing sting even more because it was at the hands of a seemingly fluky team like that?

RW: Losing hurts all the time. I'm very happy on what we accomplished the last three years, but we all wanted to win it all every year, so every year was tough.

BCB: Had you been a junior, would returning for your senior year to give it one more shot have crossed your mind?

RW: Oh yeah. I love Carolina and will always be a Tar Heel, so it would have been a real tough decision.

BCB: I read an article about the loss of your mother-in-law. Is she still a big inspiration for you?

RW: She always will be. I loved her like my own, and she will never be forgotten. I wish [his fiancée] Katie didn't have to go through something like that, but that's life, and we'll get through it but never over it.

BCB: Have you and Katie set a date for your wedding?

BCB: It must be difficult having to move away and leave your established life behind.

RW: It really is. I miss Katie a lot, as well as the rest of my family, but we talk every day. But I'm doing what I love and will continue to until someone tells me otherwise.

BCB: Well you won't hear that from us. We'll be cheering for you. Thanks for your time, man.