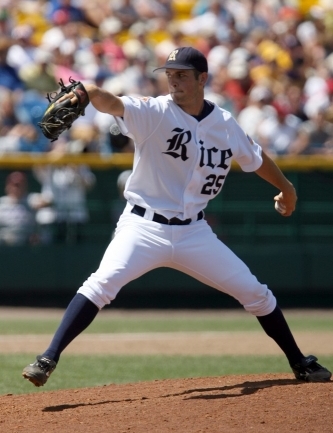 Rice University is a college baseball powerhouse with a history of producing blue-chip pitching prospects, which over the last few years have included players like Jeff Niemann, Phil Humber, Wade Townsend, Joe Savery, and Bryan Price. Though shying away from the big names, the Brewers have drafted three Rice pitchers recently: Josh Baker (Lance Berkman's brother-in-law) in the 4th round in 2004, Bobby Bramhall in the 18th round in 2007, and most recently, Lucas Luetge in the 21st round this year. After pitching well for Helena, Luetge was promoted to West Virginia on Thursday.

BCB: Congratulations on your promotion.

LL: Well, I throw three pitches: fastball, curveball and a changeup. My curveball has been my out pitch.

BCB: Is it hard curve or a loopy one?

LL: It’s both at times, but mostly it’s a big loopy one.

BCB: Are you and the organization satisfied with that? I've noticed a lot of pitchers saying that they're trying to tighten up the break on their curve after being drafted.

LL: At first I thought that they were going to try that with me, but the coaches in Helena liked the way my curveball worked and told me to stick with it. Maybe later on someone will change it, but whatever the organization wants, I’ll do it.

LL: Usually mid- to upper 80s. I could probably throw a little harder, but I don’t have great control when I try to.

BCB: And your changeup, is it a straight change or a circle change?

BCB: Do you ever use your changeup against lefties?

LL: I do occasionally, but most of the time I just use it to right-handers.

BCB: But your curve is your out pitch for hitters of either handedness?

BCB: Did you work mostly as a starter or out of the bullpen at Rice?

LL: At Rice I did both early on, but as the season went on I was normally in the bullpen.

BCB: How does coming out of the pen affect your velocity?

LL: Well, I guess when you’re in relief, normally your velocity goes up because you’re in there for a shorter period of time, as opposed to starting, [when] you know that you need to go deep into the game.

BCB: So out of the pen you're probably up near 90 then?

BCB: Is that down a bit now as a result of the long season?

LL: No, I only threw around 35 innings [at Rice], so my arm feels pretty good right now.

BCB: Rice kind of has a reputation for chewing up pitchers' arms. Do you feel there's any truth to that?

LL: Some people might think that, but if you look at all the pitchers’ inning for the year, most of them are around the same amount.

BCB: Had you heard about that rep before?

LL: Yeah, when I was getting recruited there a lot of people were telling me things like that.

BCB: It didn't deter you though?

LL: No, I think as long as you take care of your arm and your body conditioning-wise, you’ll be all right.

BCB: Is there anything special you do to take care of your arm?

LL: Really just making sure that my legs stay in shape and doing rotator cuff workouts.

BCB: So, how close are you with Bobby Bramhall?

LL: I’ve got to talk to him a lot this past year. We didn’t get to play with each other at Rice, but we’re majoring in the same field, so we have became good friends through that.

BCB: What would you like to do after baseball?

LL: I want to be a physical therapist.

BCB: Have you ever had any injury problems?

LL: No, I have been one of the lucky ones.

BCB: So did you get drafted right around where you expected to be? Or did you think you'd go higher, or lower?

LL: Really, I didn’t have a clue. I had my worst year in baseball, numbers-wise, last year at Rice, so I didn’t know what was going to happen.

BCB: You signed pretty quickly, though. Did you consider going back for your senior year to improve your draft stock?

LL: Oh I definitely considered going back, not so much to improve my draft stock, but to get closer to my degree.

BCB: School is pretty important to you?

LL: Yeah, it’s very important to me. I know that no matter how good you are, you can’t play baseball forever, so I’m going to make sure that I have a degree as a backup plan.

BCB: Are you planning on finishing your degree at Rice in the offseason? Or are you going to put it on hold for awhile?

LL: No, I’m planning on doing it in the offseason. I have three semesters left, and I want to finish it in three or four offseasons from now.

BCB: So what led to you deciding to sign so quickly?

LL: Well, it wasn’t as quick as it seemed. I had been thinking about it ever since the draft was over. Making it to the [College] World Series gave me some extra time to think about it.

BCB: The White Sox drafted you twice, out of high school and then again after your first year of junior college. Were you tempted to sign either time?

LL: No, not really. Both times, I felt like I needed to improve on other things before I signed. I wanted to make sure that I felt mature enough to play pro ball before I signed.

BCB: Did the White Sox show any interest in drafting you this time around?

LL: They showed a little bit, but the Brewers were the ones who showed the most.

BCB: Growing up in Texas, were you a Rangers or Astros fan?

LL: Actually neither--I grew up being a Mariner fan because of Griffey.

LL: No, not as much; now I just like watching baseball in general, but I still follow Griffey.

BCB: Is there any particular pitcher you try to emulate?

LL: No, everyone has their own style, and mine has been working pretty good so far, so I think I’m going to stick with it.

BCB: That sounds like a good idea. Well, thanks for your time and good luck at West Virginia.