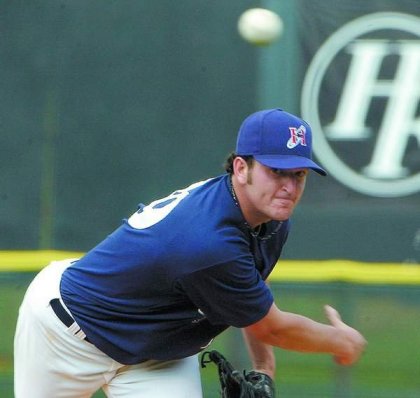 Donovan Hand was a 14th-round pick out of Jacksonville State last year, and he's been a very pleasant surprise, making it all the way to AA in just his first full season. He went on the DL with an undisclosed injury the day after I talked to him, which may partially explain some of his struggles at AA.

DH: I throw a four-seam fastball, a sinker most of the time, and a slider and changeup. I’m a sinkerball pitcher, or at least that’s what I’m described as.

BCB: So you have a four-seamer and a two-seamer?

BCB: What percentage of your fastballs are two-seamers?

DH: 90 percent. I use the four-seamer if I go up in the zone or out and to really spot some pitches off the plate.

BCB: That's with the four-seam or the sinker?

BCB: What pitch do you use as your strikeout pitch?

BCB: Do you try to strike a lot of guys out? Or would you rather pitch to contact?

DH: Contact, [but] if I get in a situation, I will try for sure to strike someone out.

BCB: Is your change a circle change or a straight change?

BCB: Did you throw one coming out of college, or did the Brewers add it? They seem to want almost every pitcher to have a change.

BCB: How did they modify it?

DH: Changed the grip some in instructs this year--nothing major, just wanted it to look a little more like my sinker.

BCB: So far your year is kind of the tale of two seasons; you were dominant at Brevard but have struggled at Huntsville. What do you attribute the struggles to?

DH: Yeah it sure has been. You know, the jump between High-A and AA is definitely been the biggest jump for me so far. The hitters here are older and experienced, and I’ve been a little off the last month or so here, but I’m trying to learn how to really pitch and use what I have to do that, and it don’t happen overnight, so it’s a process, and the complete game was a glimpse of [success], and then the last two haven’t been so good.

BCB: How have you been off?

DH: I’ve been missing spots, and my command hasn’t been as good as earlier in the season.

BCB: So is there anything in particular you're working on?

DH: Just sound mechanics and hitting spots and getting back to the basics.

BCB: So you're having a little trouble repeating your mechanics?

BCB: Which part of them are you struggling with?

DH: Pass. (laughs) It would be hard to explain, but nothing particular, just some little things that are making small differences in location.

BCB: Are you surprised at all how fast the Brewers have promoted you?

DH: Yeah a little, you know, but happy about it.

BCB: You don't feel pressured at all by it?

DH: No. I’m trying to think how to explain it. I was surprised a little. I wasn’t expecting the call to AA--really thought I had a shot but wasn’t for sure. I was really happy to be in Brevard, in the rotation, because I want to be a starter, and when the call came to AA, it was awesome. I just want to take the opportunities I’m given and use them to my advantage, learn and mature in each place to make it to the bigs.

BCB: I read that you were considering going back to Jacksonville State after being drafted. How tough was that decision?

DH: You know, it was kinda difficult, but this has been my dream since I’ve been six years old, so of course I wanted to go. but at the same time I wasn’t going for nothing, since I had a year left in school, but it was tough to leave my coaches and friends I had made there. I got a good situation, I felt like, and made my decision.

BCB: Are you going to go back and get your degree?

DH: Yeah, I’d like to when I get time. I definitely want to finish. A little personal goal.

BCB: What was your major?

BCB: What do you want to do after baseball?

DH: You know, I wouldn’t mind coaching at some level, but we’ll see what happens. I have coached a few summer league teams back home and enjoyed that.

BCB: Too bad you weren't on the 1982 Brewers--you could coach for life in this organization!

BCB: Do you follow the big league team at all?

DH: Yeah, I have a lot since I’ve been drafted.

BCB: Who were you a fan of growing up?

BCB: Oh man. How close to Tampa [the spring training home of the Yankees] did you grow up?

DH: Not close at all.

DH: Naw, I did play against his brother in college. They were in our conference. Don Mattingly was the hero growing up, other than my parents, of course.

BCB: Is there a pitcher you pattern yourself after?

BCB: Okay, so how did the LaPorta trade affect the team?

DH: You know, it for sure took a big bat out of our line up and LaPorta is a great guy, and I wish him the best, but he wasn’t a very vocal guy, so in that respect not a lot. But his presence is for sure missed.

BCB: It didn't really upset the team chemistry at all?

BCB: Who are the leaders in your clubhouse?

DH: Jason Shiell and David Welch from a pitching standpoint, and from the position side [Michael] Brantley, probably. There have been so many moves, it’s kinda hard to say one guy for sure. Probably J.R. Hopf now that he’s here.

BCB: Brantley, even though he's the youngest player on the team? What does he do that makes him such a good leader?

DH: He just goes about his business day-in and day-out, and a lot of people respect that.

BCB: Is he a vocal leader?

DH: He is a great teammate, I can say that much.

BCB: So if you were the Indians, which player would you take?

DH: Pass. Naw, I’m not for sure; I’ve played with both [Brantley and Taylor Green], and they are a lot alike personality-wise, and they are both great players. So it is definitely a great position [for the Indians to be in].

BCB: Who's the best player in the organization that you've played with?

DH: Brantley or [Mat] Gamel, they both are great players.

BCB: They both have some questions about them defensively.

BCB: Well, a lot of people have wondered why Brantley keeps seeing so much time at first base instead of center field. How does he look to you out in center?

DH: Great, he gets good jumps and has a very accurate arm.

DH: Great, in my opinion.

BCB: How does he compare to Lorenzo Cain defensively?

DH: They both are good. Right now Brantley is on the DL, so it makes sense to put Cain out there, with his speed, until Brantley returns. We’ll see then.

BCB: Okay, so how about Gamel defensively?

DH: Great arm but does make some mistakes, but he works his butt off at it and is getting better every day. The main thing is he wants to get better, and he is. And who better to teach him the Don Money?

DH: Hands down, for sure, and can hit also.

BCB: Keith Law recently said that Escobar has no pitch recognition and will swing at anything. Do you think that's right?

DH: I don’t think that’s true. He is aggressive but seems to always have good at-bats.

BCB: Okay, one last question. Are you worried at all that anyone is going to see "Escobar injures hand" and think that Alcides took you out?

BCB: Because your name is Hand…

DH: (laughs) That could be funny! (laughs)

BCB: Well, thanks a bunch. We'll be cheering for you.

DH: All right, thanks a lot.