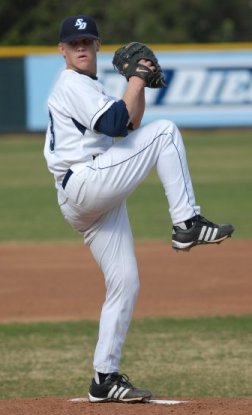 Josh Romanski was drafted by the Brewers in the fourth round out of the University of San Diego, where he starred as a left-handed pitcher and outfielder. One of his Torero teammates was fourth-overall pick Brian Matusz, who said to me of Romanski, "I have never seen someone bury an inside fastball at the knees better than Josh."

JR: For the most part, all of the teams showed some sort of interest, but the Brewers were definitely one of the most interested clubs.

BCB: Did you expect to go around the fourth round, or were you surprised at all?

JR: I was actually expecting to go a little higher, but I was content with the fourth round selection, especially to such a great club.

BCB: What makes the Brewers a great club?

JR: They have a great reputation for developing their young talent and moving them up quickly. That is definitely something that I am interested in and looking forward to.

BCB: That dovetails well with your rep as a polished college starter who is primed to move quickly. What kind of timetable do you have in your head?

JR: Well, obviously, I have the confidence that I could pitch [in the Major Leagues] soon, but it’s definitely a slow process. There are plenty of guys who have proved they can perform at that level. With all things taken into consideration, I'd give it four years. That’s what I’m working towards, anyway.

BCB: When are you going to make your pitching debut for Helena?

JR: Not sure. I’m dealing with some injuries that I’m trying to clear up. I want to be 100% before I take the mound. It should be soon though. I’m getting excited for that day.

BCB: What kind of injuries?

BCB: Seems like there's a lot of that going around at Helena; Cutter Dykstra has one too.

JR: Yeah, and me and Cutter have become pretty good friends, so maybe it's contagious. (laughs)

BCB: Did you know him before the draft?

BCB: Did you know anyone in the organization at all?

JR: I wouldn’t say I knew anyone personally, but I had played against [Erik] Komatsu and [Logan] Schafer, so I was familiar with them.

BCB: Who has impressed you the most on the club?

JR: I'd have to say Komatsu with the bat and [Mike] Marseco at short. He's unreal with the glove, so smooth.

BCB: How about pitching-wise?

JR: It’s hard to say really; our staff has been pretty inconsistent, but I'd have to go with [Michael] Bowman. He deserved to be moved up. He was throwing great.

BCB: So you probably weren't expecting to make your pro debut as a DH, huh?

JR: No, but it was awesome. I love to hit. I’ve always loved hitting since I was a kid, and it was cool to know that I could still hit at this level even though I was drafted as a pitcher.

BCB: Yeah, you swung it pretty well at San Diego, and you did just fine moonlighting at Helena. Do you have dreams of being Micah Owings?

JR: (laughs) Thank you, and yeah I do, actually. Either him or Rick Ankiel if my pitching doesn’t work out.

BCB: Did you impress the Brewers enough with the stick to let you DH even after you're healthy enough to pitch?

JR: I’m not sure. I think I impressed them, but they haven’t seen me pitch yet, so it’s hard to say. If they like my pitching a lot then I probably won’t swing it, but if they find that they like my hitting more then sure, why not?

BCB: Do you prefer one to the other?

JR: Not really. With the type of player that I am, I love to play everyday, but whatever is gonna keep me in the big leagues for ten years is what I want to do.

JR: I throw five pitches: fastball, curveball, slider, cutter, and changeup, with my changeup being my best pitch.

BCB: Are the Brewers going to have you keep both the curve and slider, or focus on one?

JR: Both. I use the curve on righties and the slider on lefties. I need both.

BCB: How do you like Rene Gonzalez as a manager?

JR: He's great. He keeps it loose in the clubhouse with his sarcasm and is pretty easy to play for.

BCB: It seemed like the Brewers maybe drafted a few too many pitchers, and you guys didn't really have enough position players at the beginning of the season. Was that a cause of any grumbling on the team?

JR: No, not really any grumbling; everyone was professional about it

BCB: Are you a Padres fan?

JR: Yeah, but that’s in the closet right now with how horrible they are doing. (laughs)

BCB: You weren't too mad at being drafted by the team that helped knock them out of the playoffs last year? I hear Tony Gwynn, Jr. is kind of infamous in San Diego for that.

JR: Not at all, and yeah he is. It was an ironic situation for sure.

BCB: Thanks for taking the time to talk to us, and we wish you the best of luck in the future.