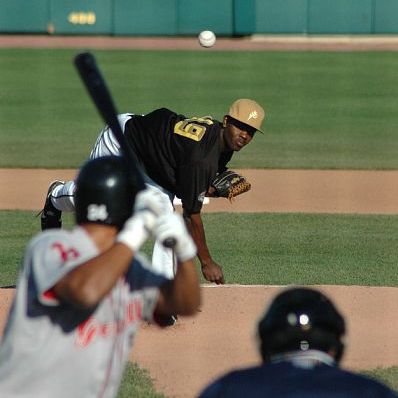 Hopes were high for Nick Tyson coming into the year. The 32nd-round draft-and-follow from the 2006 draft had posted good numbers for Helena in his pro debut in 2007, and people were excited to see what he could do in full-season ball, especially after Baseball America rated his curveball as the best in the system. Unfortunately, Tyson's season at West Virginia unraveled quickly, as he allowed almost two hits an inning before being demoted to back to Helena.

BCB: I'd imagine you're not thrilled at how your season's gone so far. How would you describe it?

NT: Well, if you didn't know, I was sent back to [Helena] ‘cause of how things went for me in West Virginia.

BCB: Yeah, that had to be frustrating for you.

NT: Yeah, it was. But I was told that things happen for a reason, so I just kept my head were it needed to be, and that was for me to get better and back to were I was. Being in Montana let me realize that things weren't as good as I thought they were. As in, I needed to focus on things more and do extra to stay ahead of the game. Since here, I have done a lot better. I feel like I have more control of my outings ‘cause of the extra work I do on my own.

BCB: What do you attribute your struggles in West Virginia to?

NT: The struggles I went through were on my shoulders. I kept putting the blame on other people but then realized it was my doing. When I saw that, I began to do better and help my team also.

BCB: When did you begin to take responsibility? After your demotion?

NT: I saw it before I got demoted, but by that time it was too late. About a week later I was demoted.

BCB: Do you think you'll be in Helena to stay until the season is over?

NT: I've put thought into that, but I'm still not sure. Anything could happen.

BCB: Can you describe what you throw a little bit?

NT: I have a two-seam fastball that I throw as my fastball at about 87 to 88. I'm not a power guy. I pitch to contact, as they say. I'm developing a changeup, and finding my curveball again. That's about it.

BCB: Would you call yourself a groundball pitcher?

BCB: So if you have a batter 0-2, are you still going to pitch to contact and try to get a grounder, or are you going to try to strike him out?

NT: Like most pitchers, I'd try to strike him out. But a groundball wouldn't hurt either. (laughs)

BCB: I read when you were drafted that you had a good curve. You've kind of lost the feel for it?

NT: Yeah. That was part of me not focusing on my main goal, thinking things would have come a lot easier.

BCB: How do you lose the feel for your curve, and how do you go about finding it again?

NT: It's not so much losing the feel; it's more of not doing what you did to get yourself were you were, as in me not doing my extra work, thinking what I was doing was good enough.

BCB: What extra work are you doing now that you weren't before?

NT: I do extra running. I work on my mechanics every day—well, as much as I can, really. That's really it. They say pitching is about being able to repeat your delivery, so I try to build up muscle memory by repeating my windup. I also try to find better ways to control my pitches, as in hitting spots.

BCB: So the changeup you're developing, is that new this year? Or did you throw it last year?

NT: II mixed it in last year every now and then. I'm still making adjustments to it, but its coming along pretty well. I've been using it quite a bit now. It's becoming a better pitch for me.

BCB: Is it a circle change or a straight change?

NT: It's more of a split change. But as I said, I'm still making minor [alterations] to it, so in the end it could be a circle change.

BCB: What would you say the strength of your game is right now?

NT: Being able to command my fastball to both sides of the plate, and having a second and third pitch to go along with it.

BCB: So if those are your strengths, what is the thing you need to work on the most?

NT: Just because I say they're my strengths doesn't mean I don't need to work on them. I need to always work on everything I do. But if I had to pick a weakness, it would have to be my repetitiveness of all my pitches—being able to double up or even triple up on batters is a big key.

BCB: Do you ever shake off pitches?

NT: Never. Well, I can't say never. But I try to have faith in not just my pitches but in my catcher. Maybe he sees something I don't in the hitter.

BCB: Do the coaches ever call the pitches?

NT: Sometimes they do, but not much.

BCB: You got lumped in with Rob Bryson and Chad Robinson in people's minds because you were all interesting, late-signing pitchers from the 2006 draft. It seems like all of you have had kind of disappointing years, to varying degrees. Is that just coincidence, or is it a coaching thing or something?

NT: It's just a coincidence. We just happen to have some things go wrong. Chad went down with a big injury, and Rob got traded. I heard that it was good for him to get traded because he could move up faster. That's our main goal, so I wish him all the luck in the world. That was my boy when we were on the same team. I used to say there was no Tyson without Bryson.

BCB: Have you kept up with him at all since the trade?

NT: We still keep in touch. Like I said, he was my boy.

BCB: How's he feeling about his shoulder injury?

NT: Not too sure about that. I know he has to be mad that he's injured. I heard he was coming along pretty well, though. I just hope he gets well soon.

BCB: Who are your other good friends in the system?

NT: Zelous Wheeler, Eric Farris, Wes Etheridge, who's no longer in the system. I also have a few Dominicans, too.

BCB: I didn't know Etheridge had been released. What happened to him?

NT: Not too sure. Don't want to go too far into it.

BCB: No problem. Which Dominicans are you close with?

NT: He throws gas. He runs it up the in the upper 90s. A lot of the Dominicans throw hard. Look at Wily Peralta: he topped out at 97 the other day. I heard one outing not too long ago his last five pitches were all 97. He also has dirty offspeed.

BCB: You think he'll stay in the pen?

NT: Yeah. He's a great closer. I don't see why he would come out.

BCB: How about Rolando Pascual? He was the Brewers' biggest international signing in awhile, but he hasn't really done much.

NT: He's struggling, as we've all done before. I think he'll pull through it, though. He's still learning and eager to learn.

BCB: Is his stuff significantly better than other pitchers'?

NT: Yeah. He has a really good fastball that he can run into the mid-90s. He just needs to learn to control it a bit. But as I said, he's young and still learning.

BCB: It seems like you have a very positive attitude, not just about yourself but about other players.

NT: I've been told that before. As a kid, I was always taught by my mom to look at the good things in life. She helped me put a good head on my shoulders.

BCB: She did a great job. We really appreciate your time, and wish you the best of luck going forward.