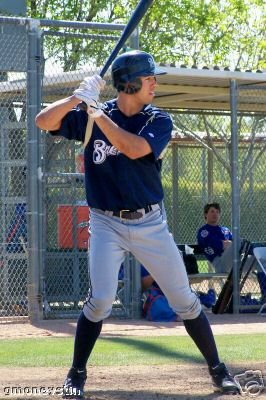 I don't hear much about Erik Miller, but surprisingly, he'd heard some about me. Before I could even ask him something, the 17th-round 2007 draftee started talking, and as you'll see, we talked for awhile. Of all the interviews I've done, I think this was my favorite so far, and not just for the mild ego-trip.

EM: I've read a couple of your articles.

BCB: Oh yeah? Which ones?

EM: I read the one on [Cutter] Dykstra and [Erik] Komatsu a couple days ago.

EM: I liked 'em. I always like reading interviews of other players.

BCB: Thanks. You're the first guy to have heard of me. Did you google it, or did someone show you?

EM: No way, you're all over Brewerfan and Google. I stumbled upon Dykstra's from Google, I think.

EM: My dad does. He loves reading about what's going on, so every now and then I'll go and see what people are saying.

EM: No, he always talks about it but never does.

BCB: I'll have to make sure I only say good things about you in the future!

EM: (laughs) No worries, I'll just have to play well so you can't say anything bad. (laughs)

BCB: Actually, I can only ever remember reading positive things, mostly people waiting for you to make your debut this season.

EM: Yeah, I broke my hand right at the end of extended [spring training].

BCB: Is it still bothering you at all?

EM: No, not at all. My wrist is still a little weak from being in the cast, but it's getting better.

BCB: I bet you could have a long conversation with Rickie Weeks about weak wrists. Brad Nelson, too. He had his hamate out years ago and supposedly it's only just now feeling 100%.

BCB: Nope, I'd love to though. Are you friends with him?

EM: Yeah, he was in extended for a bit.

BCB: He's blown up this year, caught everyone by surprise.

EM: Yeah, tell me about it. He's doing awesome.

BCB: You might be remembering his name from Steffan Wilson's interview. They're roommates on the road.

EM: Ah, that's what it was. I just read that last night.

BCB: All the interviews are collected in one place on brewcrewball.com, if you want to read any more. On the left-hand sidebar, there's a heading labeled "Interviews".

EM: Sweet, I'll have to go check out the site. We get a lot of downtime after the games, so it's nice to have something to do. (laughs)

BCB: You guys had a hell of a game tonight.

EM: Yeah, we play really well against Ogden. I wish we could have played the same against Orem.

BCB: It would have been nice if you could have snapped their winning streak. They lost tonight, though.

EM: Dang, who beat 'em? I wanted us to be the team to take them down.

EM: No way! How the heck did that happen?

BCB: Somehow Missoula and their .238 winning percentage got it done.

BCB: So, how exactly did your hand get broken?

EM: We were playing the Mariners, and I was hitting against a side-armed righty, and he threw an inside fastball that tailed in and hit off my right two knuckles.

BCB: Which bones did you break?

EM: The fourth metacarpal. The one in the hand that goes to your ring finger.

BCB: People tabbed you as a sleeper coming out of the draft last year. I think your scouting report on Brewerfan said "an exciting blend of speed and power". How would you describe your game?

EM: Well, I pretty much just try to utilize my speed as much as I can. My goal is to get on base and get myself in scoring position as fast as I can so the guys behind can drive me in. Same as on defense; I play center field, so my speed plays well in tracking down balls in the gaps and covering all that ground.

BCB: So you don't consider yourself a power hitter?

EM: No, not yet at least. They always say power eventually comes with time.

BCB: You said your goal is to get on base. Do you get into statistical analysis at all? You know, "a walk is as good as a single", emphasizing on-base percentage over batting average?

EM: Not really. The situation will dictate what needs to happen. If I just need to get on base, I'll try and drop a bunt down, or if we know the pitcher is kind of wild, then I'll try to work the count and draw a walk, where that saying would come into play.

BCB: At what point in an at-bat does the idea of trying to coax a walk enter your mind?

EM: Sometimes before I even step to the plate. If I'm leading off an inning, I'll watch the pitcher and see if he's locating or if he's wild. If he can't throw a strike in his warm-up pitches then I'll make him prove to me he can throw one in the game.

BCB: Last season, you only got a chance to play in a couple games—oh wait, I lied. I'm looking at your stats this year from Arizona.

BCB: (laughs) Lots of zeroes. You've been hot lately, though. Is it because your wrist keeps getting stronger, or is there another reason?

EM: I'd have to say it's a mixture of getting stronger and just getting more at-bats and more work in before the games. Paco [Martin, Helena's hitting coach] and I have been working hard trying to get my bat speed going again and just ironing out all the little things in my swing and my approach that weren't quite right.

BCB: When you debuted last year, did you feel like having played in a wood-bat community college league gave you a leg up on other players that were used to metal bats?

EM: Yeah, I did. I felt really comfortable with a wood bat going into the season having just come off my college season. Unfortunately, my results weren't there, but I guess that's just part of the process of getting better.

BCB: Why did you decide to go to Scottsdale [Community College] rather than a four-year school?

EM: Well, out of high school I didn't have any offers from D-I schools and didn't get drafted, so I decided to try and walk on to a juco team, and everything kind of fell into place from there.

BCB: Were you hoping to get drafted out of high school?

EM: Yeah, I thought it would have been cool playing pro ball right after high school, but I honestly wasn't ready, and I'm glad I made the decision that I did.

BCB: Did you have any contact with any teams that year? I mean, did you expect to get taken?

EM: No, not at all. I was just a kid dreaming of the big leagues. (laughs)

BCB: Where did you expect to go in the draft last year?

BCB: So you were a little disappointed then?

EM: At first I was a little disappointed, but my scout came over that night and talked with me, and we got everything figured out and done that night.

BCB: So I'm pretty sure you left out the most important reason you went to Scottsdale: You wanted to be a Fighting Artichoke.

EM: (laughs) Yeah, we called it the Artichoke Nation! I can't tell you how much crap I've gotten because of that mascot. (laughs)

BCB: Did anyone ever point out to them that it looks a little like a certain drug of abuse? Let's just say it's a good thing Jeremy Jeffress didn't go there.

EM: (laughs) Yeah, it's been known that Artie the Artichoke looks like he should be hanging out with Cheech and Chong.

BCB: Where can I get an Artie the Artichoke hat?

EM: I don't know, maybe eBay or something, 'cause I sure don't have one.

BCB: You didn't save yours? Oh man, I would have treasured my Fighting Artichokes hat. So where does that nickname come from? Seems like a bad idea for a sports team—tailor-made to be called the "Chokes" when you lose.

EM: Well, we made sure we didn't lose much. It's actually a funny, weird story, but I don't know if we want to go into all that. (laughs) Did you know the original colors were like pink and green, I think they were?

BCB: That's horrible. They must have been smoking Artie when they came up with that.

EM: Yeah, brutal, but that was back in the day.

BCB: So, when you're not playing ball, what do you like to do?

EM: I'm a pretty active guy. I go hunting with my dad and friends of the family, fishing, hiking, pretty much anything outdoors.

BCB: Playing in Helena is probably a dream for you then—I hear the fly fishing is great.

EM: Yeah, definitely. We're going on our next off day to go fishing, so I'm pretty excited for that.

BCB: Who do you fish with there?

BCB: Hey, did you ever play against Sandra Day O'Connor [High School] when you were in high school?

BCB: The Brewers drafted a kid out of there this year.

EM: Yeah, Maverick [Lasker]. He's a good kid. I met him when I was rehabbing my hand.

BCB: Yeah, he's got a stress fracture in his back. Doesn't sound like an injury I'd like to have.

EM: Yeah, I talked to him a couple nights ago, and he said he was all better and supposed to throw this week.

BCB: Well that's good news. So, if you had to name one guy on the team that you were sure was going to make the big leagues, who would it be?

EM: That's tough. Komatsu is a great all-around player who is very consistent, so I'd say him and Wily Peralta. The kid throws absolute gas and has a good slider to boot, so if he stays healthy and keeps improving, no doubt he should be a big leaguer.

BCB: Do you think he'll stay in the pen, or do you think the organization will move him to the rotation at some point to get the most out of his arm?

EM: I think he's a perfect closer. Comes in to throw it by three guys and win a game, but who knows what the organization has in store for him [Peralta started on Tuesday night].

BCB: Is Rookie ball cliquey, with so many foreign-born players, mostly Dominicans? Or does everyone mingle?

EM: Yeah, it kind of is for a while, then as the Latinos learn more English and everyone else learns more Spanish it gets easier to mingle and make friends.

BCB: Well all right, I think I've pumped you for enough info. Anything else you want people to know?

EM: There's nowhere to eat here after the games. (laughs) No, that's it man.

BCB: That's the incentive to get promoted! Or fish better.

EM: (laughs) I'll go with the first one. It was good talking to you.

BCB: Thanks, you too. Take care, and good luck.