Remember when you were a kid and it felt like Christmas would never come? I always had an advent calendar, and while it didn't make Christmas come any faster, at least it meant I got chocolate every day.

Today, the Brewers' pitchers and catchers countdown is at 24 days, meaning it's time to open the first door on our Brewer Advent Calendar. And while the technology isn't quite in place for me to give you chocolate every day, I do promise to give you one small note around this time each day for the next 23 days.

Behind the first door on the calendar is Jason Kendall. 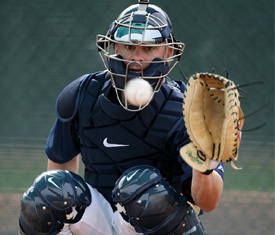 Pitchers and catchers are still more than three weeks away from reporting, but it wouldn't surprise me if Jason Kendall has been squatting in a catcher's stance in Maryvale the entire offseason. Kendall caught 149 games last season, a feat that has only been matched 33 other times in major league history, and only twice since 2000 (Russell Martin in 2008, and Brad Ausmus in 2000). Furthermore, there are only sixteen players in Brewer history who have caught as many games in their Brewer careers as Kendall caught in 2008.

Kendall has caught 140 or more games nine times in his career, and ranks 13th on the all time list with 1774 games at catcher. He could move all the way up to sixth or seventh on that list in 2009, passing some or all of the following players: