22 days remain until pitchers and catchers report. Behind door #22 in the Brewer Advent Calendar is Dave Bush. 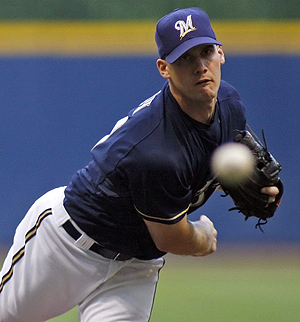 Dave Bush has been a Brewer for three full seasons now. Doesn't it feel like it's been longer? Bush hasn't missed many starts during his tenure in Milwaukee: he's made 92 starts over the last three seasons, already moving into a tie for 19th place on the Brewers all time games started list.

Perhaps even more notable though, is how often Bush finishes, or rather doesn't finish, those starts. Bush has just three complete games in 92 career starts. Only one other pitcher has ever started that many games for the Brewers and only completed three of them: Chris Capuano, with three in 111 starts.