It's time to open door #21 on our Brewer Advent Calendar...and behind it we find Carlos Villanueva! 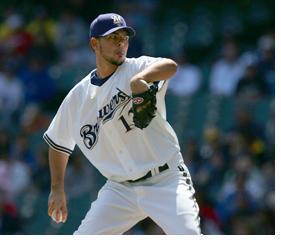 Villanueva has had cups of coffee as a starter each of the last two seasons, making nine starts in 2008 and six in 2007. Even with that time in the rotation, though, now that Salomon Torres, Eric Gagne, Guillermo Mota and Brian Shouse are all gone, Villanueva made more pitching appearances in 2008 than any other returning Brewer: