It's time to open another door on the Brewer Advent Calendar and today we find...Marcus Hanel! 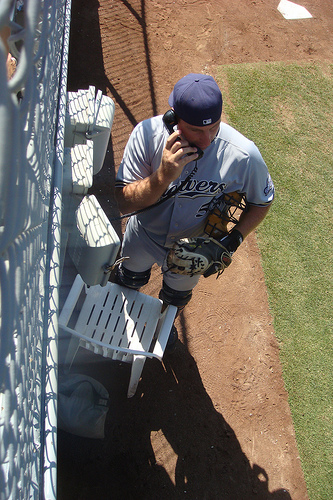 via Jamie in LA's Brewers photostream

In the Brewers advent calendar, even the unexpected treats are still exciting. No Dubbel Zout here! For those heretofore unaware of Mr. Hanel's existence and/or place on the team, Marcus is the Brewers' bullpen catcher. As seen above, he's the guy responsible for wearing catcher's gear and warming up Brewers relievers. I think it's fair to say he's one of the best dedicated bullpen catchers in the league. To underscore his importance, the Brewers list him among Brewers coaches.

Let's move to the category of things that make sense upon reflection but that you don't really think about. It turns out that Marcus Herbert Hanel played eleven seasons in the minor leagues before heading out to the bullpen. He was originally drafted out of Racine's Horlick High School by the Pittsburgh Pirates in the 18th round of the 1989 MLB draft. After signing, he hit .321 for Bradenton in the Gulf Coast League. That proved to be the peak of his offense at the professional level. It took him until 1994 to post another batting average over .200, and that was in his fourth go-round in the Carolina League. An organizational player, he made his way up to AA by 1995. After a couple seasons there, he signed with Atlanta as a free agent and spent 1998 in AAA. For the 1999 season, he signed on with Arizona and was invited to major league camp.

You're in major league camp, Marcus. Smile!
(picture from the 1999 Arizona media guide)

After spending the spring with Arizona (and no doubt getting hitting tips from this guy), Marcus lasted only six games with AAA Tucson before calling it a career. All told, he hit a Kendall-enhancing .193/.237/.265 in 2060 minor league at bats. Undoubtedly it was his catching that got him an 11-year career and it's still his catching that keeps him employed today.

But there's more to Marcus Hanel. Don't let his relative anonymity fool you. The large-handed catcher is as dedicated, if not more, to helping his community than any other major leaguer. To that end, he established a charitable organization dedicated to helping terminally ill and disadvantaged children in Southeastern Wisconsin. Taking Marcus' nickname, it's called Koos for Kids. Just looking at the photos on the site, some pretty good kids get needed help and the annual auction/dinner looks like a pretty fun time. Hobnobbing with the Brewers elite, seeing the racing sausages tower over Seth McClung, and raising money for a good cause? Awesome.

He may not be the most famous Brewer, but Marcus Hanel still plays an integral role on the team. Whenever someone in the rotation starts hitting a rough patch next season, take solace in the fact that an experienced veteran is out there prepping the team's 'pen.