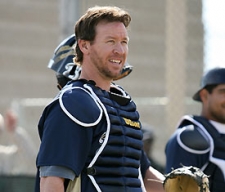 At least we know we didn't pull him away from anything important.

On Jason Kendall's page, we briefly discussed how much Kendall plays. But there must be two sides to every coin, so it's only fair to point out how little Mike Rivera played. What's even more interesting is how well he hit in limited opportunities. Rivera hit .306/.377/.435 in 2008 despite ten different stretches where he went ten days or more without an AB. Only eight catchers in all of baseball posted an OPS higher than Rivera's .812. Here are the worst ten OPS seasons from 2008 by catchers who played more often than Rivera: