The number 13 is widely seen as unlucky, so it's only fitting that door #13 houses 2008's unluckiest Brewer, Yovani Gallardo. 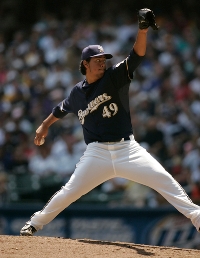 Gallardo made just four regular season starts and pitched just 24 innings in 2008, but he's got big shoes to fill in 2009, when he will likely be the Brewers' Opening Day starter and staff ace. All told, Gallardo is probably expected to fill at least 200 innings for the Brewers in 2009.

Thirty four pitchers stacked up 200 innings in 2008, Twenty three teams had at least one pitcher reach that mark, but the White Sox were the only team to have three (Gavin Floyd, Javier Vazquez and Mark Buehrle).