Share All sharing options for: The Brewer Advent Calendar #1: The Wisconsin Timber Rattlers

Tomorrow around this time pitchers and catchers will report to Maryvale for the first time. In the meantime, we've got one more giveaway on the last day of the Brewer Advent Calendar, and behind the final door we find...the Wisconsin Timber Rattlers! 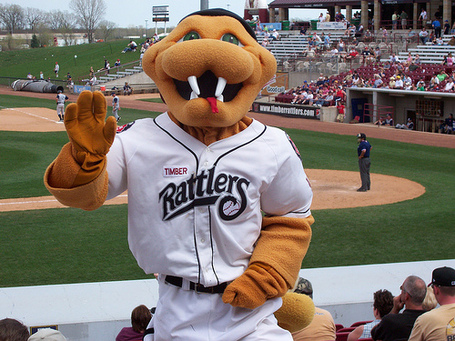 2009 will be the Rattlers' first season as the Brewers' Midwest League affiliate, and they're coming on board at just the right time. Top prospects Brett Lawrie, Jake Odorizzi, Cutter Dykstra, Erik Komatsu and Cody Scarpetta, among others, will likely spend part or all of 2009 playing their home games in Appleton.

The Timber Rattlers would like to give you the opportunity to see them in action.  They're giving away four pairs of undated ticket vouchers for 2009 to be used for the game of your choice, as well as a Brewers/Timber Rattlers adjustable cobranded cap. The rules are the same as they've been each of the last two days: Comment on this post to enter, and I'll close comments and choose five winners Saturday at noon. Thanks again to the Timber Rattlers for making this possible.