Alcides Escobar and the Case of the Mysterious BABIP

Share All sharing options for: Alcides Escobar and the Case of the Mysterious BABIP

Last season, Alcides Escobar put up an impressive line of .322/.367/.440 at AA Huntsville-- a .373 wOBA compared to an average of .343 in the league. The primary source of his high ranking in many prospect lists (including #8 on MLB.com's list for all of baseball) is his defense and apparently incredible range. He rated out at +22 runs in relation to Southern League shortstops in TotalZone, and earned some scouting reports like this one, from our own Josh Kalk:

I came to Huntsville knowing that Escobar is a very solid defender, so the fact that he wowed me with his play in the field should tell you something. In the first game I saw a check-swing roller get by the pitcher. Escobar charged it hard and made a bare-handed pick and throw to just beat the speedy left-handed batter. Shortstops don't need to make plays like that often, so I was impressed.

I am convinced he is the best infielder defensively in the Brewers organization and, at 21, has room to improve.

Escobar has been the subject of some debate. Is his extreme BABIP indicative of a player overrated by scouts? I hate to construe this issue as scouts versus stats, but in a sense it is. Can Escobar's development surpass the batting average regression a statistically-minded fan might expect?

So this is an introduction to my attempt to look at the problem, and what follows is an in-depth look at Alcides Escobar's BABIP-- why it was what it was, and what we should expect in the future. Hopefully we can learn some things about BABIP in general along the way.

For some reference, Alcides was about a 6-win player for the Huntsville Stars in 2009-- that is, replacing him with a AA-caliber utility man (like Michael Garciaparra) would have resulted in us expecting the Stars to win 6 fewer games. A +10 run shortstop can hit like a replacement player (just slightly higher than Escobar's MLE last year) in the major leagues and be a roughly league average or 2 win player. Escobar has a ton of value as a prospect even if he is simply an excellent defender and a poor hitter. If he can sustain an above-average hitting line up into the Major Leagues, we can begin looking at him as an all-star caliber 4-win player.

This all brings us back to his 2008 BABIP, which was .380. An average BABIP is around .300, and we know that a BABIP far away from the average is prone to regression.

How much regression is what we would like to find out. I think a common misconception is that we would (without any other factors considered) expect a BABIP of .300 next year, or a BABIP of .220 to balance out that .380 figure. Neither is true. We'd probably put the estimate somewhere between the two without looking at any other factor-- around .320-.330.

Thanks to a lot of great research by Peter Bendix and Chris Dutton, we know that there are a variety of other factors that can infleunce BABIP, meaning that it is unreasonable to simply expect a .300 BABIP for every batter, or just use the line drive rate +.12 method described in Jeff's post linked above.

Here's a quick rundown of some of the factors they identified.

First of all, Alcides Escobar is a decidedly splendid bunter. He reached base on 12/13 of his attempts to bunt for a hit last season. He was 9/12 in 2007 and 7/9 in such attempts in 2006. I think it is fair to say that bunting for hits is a skill of Escobar's, so we can already bump up his BABIP expectation going forward. Removing the bunt hits from the 2008 BABIP makes it .355, which is still quite a bit higher than we would generally expect.

Other factors, of course, are involved. Here are the splits on the rest of the batted ball types for Escobar. For major leaguers, we expect line drives to not become an out about .700 of the time, fly balls around .140 including popups, and .200 for ground balls. The minor leagues generally have a higher BABIP because of poorer defense and park conditions. So here is the comparison side by side; Escobar's BABIP followed by the not-out expectation:

Of the 123 fly balls, 16 were on the infield. That's a pretty good ratio of IF/F, about 13%. Judging by the spray chart, 2 of the 16 popups went for hits, and both were very close to home plate. Excluding the popups, it looks like Alcides was pretty neutral in luck on fly balls.

But the neutrality of the fly balls is offset by the other two batted ball types. It appears as if Alcides was lucky on his line drives and to a lesser extent ground balls. I say that it is a lesser extent only because Escobar has good speed and other factors like spraying the ball and making a lot of contact, factors that would suggest that he will carry a higher BABIP on ground balls than an average hitter.

Let us examine the ground balls further, courtesy of a new feature at the Minor League Splits database, spray charts. Here are all the balls Escobar hit that were classified as ground balls by minor league scorers. Green, of course, is a hit and red is an out. 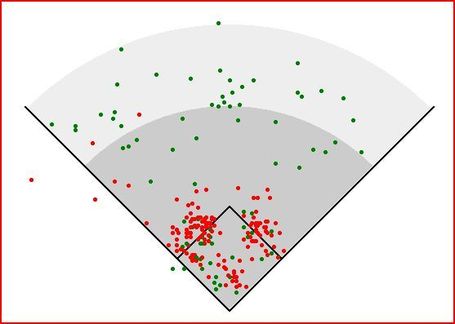 Compare that to this hitter, who played in the same park, had a similar amount of at-bats, and racked up a .220 BABIP on ground balls, though he hit far fewer of them overall than Alcides. 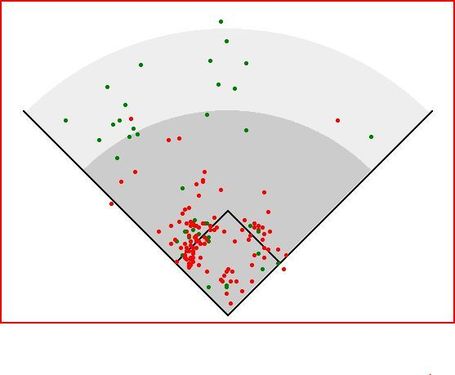 That's Huntsville second basemen Mike Bell. He's also righthanded, though he lacks Escobar's speed. Escobar's chart includes his bunts, which are obviously clustered near home plate-- the bunts are not included in the groundball BABIP number. The other noticeable differences are the high amount of groundball hits in the outfield and a higher concentration of green in the infield itself for Escobar. The first change in shade represents 250 feet from home plate, so it appears that a lot of hard-hit balls from Alcides got through to the outfield, and he had a mix of luck, impressive speed, and a lot of well-distributed ground balls. I would expect the BABIP to come down on ground balls, probably somewhere between the .290 he had this year to about .250 in the future. That figure would be lower in the majors due to some of the league factors.

Alcides Escobar did not earn a .380 BABIP in 2008 and it would be foolish to expect him to match that at any point in the future. But his unique skillset suggests that he could be a player that consistently puts up a higher than average BABIP. In fact, he can remind one of another player who consistently puts up a high BABIP. I cannot take credit for this comparison, but here are the minor league numbers of a current major leaguer who has a BABIP of .344 in 3 full seasons versus Escobar's at the same age.

The player I'm comparing Alcides to had a reputation as a poor defender throughout his minor league career. The mystery player? As many of you have probably figured out already, that is Hanley Ramirez. Again, his major league BABIP is .344, and the similarities are intriguing, though Ramirez obviously has much better power and patience skills.

Do I think Alcides Escobar will be as good a hitter as Hanley Ramirez? Of course not, but I acknowledge there is a chance he could develop more power. Ramirez already has developed the power and has exemplary patience in addition to improving his defense to near average, making him one of the greatest players in the game.

What I do suggest is that Escobar can succeed given his current type of game. He rarely walks, but I predict that he has the secondary skills that will allow him to sustain an above-average BABIP at the next level. Even without walks, he has a disciplined approach at the plate, makes consistent hard contact, and uses the entire field. He also hits a high number of ground balls, compared to most players, and refuses to hit popups. These skills hit almost all of the points identified above for players that have a higher BABIP. I am convinced that even if his average has to drive his OBP and slugging, he will be an effective enough hitter in the majors to make him quite valuable, even if his development simply tops out with the skills he has now.

The upside, on the other hand, is frightening-- if you are an employee of another NL Central team. Just hypothetically, because I do not endorse this projection, how about we say that Escobar's patience and power continue to develop and his defense tops out at +15 in his major league prime. Then we would be looking at a player with 5-6 win value. Of course, we already have a shortstop like that-- only adding to the possibilties brought about by having an asset like Escobar.