Share All sharing options for: Quantifying the Offensive Rebound

Five position players played for the Brewers full time through most of 2007, 2008, and will play full time in 2009 if healthy. Prince Fielder, Rickie Weeks, J.J. Hardy, Ryan Braun, and Corey Hart hit exceptionally well in 2007 and as a group dropped off in 2008, though other improvements in defense and the starting rotation more than made up for their regression overall, and the team improved by 7 wins.

We as Brewer fans often cite an offensive "rebound" that could help overcome the loss of Ben Sheets and CC Sabathia going into the season. The means are available to quantify the dropoff and predict the improvement we can expect in the offense if they reach our community projections, so here it is. In the process, we can see how realistic our projections look in comparison with the previous two years-- a good projection would probably put our estimate somewhere in between the two.

Jack Moore referenced this concept in his recent post at Right Field Bleachers about replacing the nine wins from the two departed pitchers, which got me thinking about the subject. He concluded that contributions from Looper and Gallardo and an improvement from the bullpen will come close to replacing those nine wins, and then said this:

This is before we consider that many of the Brewers hitters suffered down years and are likely due for regression this year.

To begin the process of evaluating the hitters, we will take a look at the wOBAs posted by the five core players in 2007 and 2008 compared to our projected wOBAs in 2009. The past wOBAs are from Fangraphs, so they include baserunning.

Because we did not project all of the numbers necessary for wOBA in our Community Projections, I am using a modified formula to estimate wOBA from OBP and Slugging Percentage: ((OBP*1.75)+SLG)/3; the numbers match up closely with actual wOBA. To account for baserunning, I added a conservative .005 to Hart and Weeks and deducted .005 from Fielder and Hardy, and kept Braun neutral.

Here is a graphical representation of the past wOBAs, followed by the projected wOBA. Click the image to open a larger version, this one is very difficult to read. The black line is the league average wOBA; the bars are Blue: 2007, Red: 2008, and Light Tan: 2009 BCB Projection. Remember that these numbers are not adjusted for playing time, wOBA is a rate stat. We will adjust for playing time later. 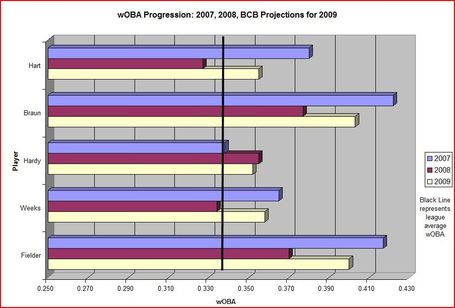 The trend is the same for each of these players except Hardy. 2007 is the longest bar, 2008 is the shortest, and our projection sees improvement but not a return to 2007 levels. That is what we would have expected, and it looks like our projections fit in nicely with what a good projection should do. Hardy is the exception, he improved from 2007 to 2008 and we project that he will not quite match that production.

wOBA is only part of the process of run production, though-- to find how many runs each of these core players produced context-neutrally compared to average, we have to add in how many plate appearances each of these guys received. Then we can determine, in runs or wins, the impact of the dropoff and the potential rebound.

Here is the graph that accounts for playing time in plate appearances for offensive projection. The number on the y-axis is how many runs the player produced (or is projected to produce) compared to an average player given the same number of at-bats. Again, the image is linked to a larger version in a new window. The plate appearance projections are based on our playing time projections. Hardy, Fielder, and Hardy have the same amount of PAs as last year, and Braun and Weeks both got bonuses of 40 at-bats to account for injuries that kept down their totals last year. 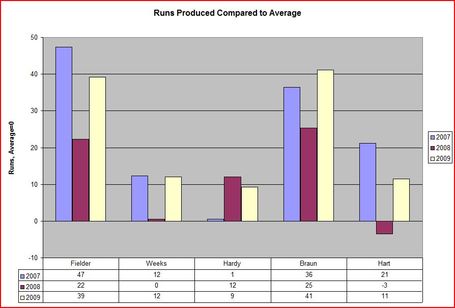 You will notice that the trend stays the same. One note is that Braun only had 492 PAs in 2007, so his wRAA is lower.

So by now you are probably noticing that our projections forecast a nice rebound for the core hitters, and it is time to put some numbers on the impact our projected rebound could have. These are rounded intentionally, because the error range is probably around 5 runs due to my calculating of this manually.

The Five Core Players, Total Production of Runs Above Average

It looks like our projections, though lower in wOBA than 2007, are offset by Hardy's improvement since then and the increased plate appearances for Braun, Hart, and Weeks. Our community projections think that the five core players will gain five wins in value over last year.

The important thing to take out of this is to not take this as a projection for the improvement of the entire offense. There are a lot of factors involved. Last year's team was able to win 90 games because other players hit well, especially the bench and Gabe Kapler, and was aided by some clutch performance that helped last year. This is just the five core players and their performance, not the entire offense.

These are your projections for how the offense will do, not mine or a system's. The numbers above are just me applying the numbers we received to a system to determine the overall improvement, which looks to be about five wins.

I do not think the offense overall will be 5 wins better than last year because of these factors, but I think these five core players will gain about 5 wins in value, even if the rest of the offense falls off some, the offense should almost certainly improve. This expected improvement further solidifies our view that this team will compete, and that the combination of Looper and Gallardo plus the improved bullpen can replace the 9 wins lost to free agency. It will just be a transition-- last year, the Brewers pitched their way into the playoffs. This year, they will try to mash their way in.