Looking at the Rotation, Again

Share All sharing options for: Looking at the Rotation, Again

So here are the averages of the 10 projections we received for the starting pitchers.

I tend to think we're pretty optimistic on Bush, but for the most part, these look really good.

So if we get this kind of performance, where does that leave the Brewers in 2009? Well, the news is actually quite good. First, we'll do some pitching runs above replacement calculations. The rule is (5.37 - ProjERA) / 9 * ProjIP =RAR. In simple terms, this is the number of runs each pitcher would save in relation to a replacement-level pitcher pitching the same amount of innings. That 5.37 figure is from Dave Cameron and Fangraphs, who calculated that number as the replacement level for NL FIP last year.

Average for about 180 innings is +19 runs. So we have 2 above-average starters with durability questions, a solidly average starter in Bush, a pitcher who we project to be pretty good over 120 innings in McClung, and then a whole lot of replacement-level pitching.

But how much replacement-level pitching, you ask? Jeff tried to tackle this last night. Last year, NL teams averaged 932 innings out of starting pitchers, and I think that's a pretty fair place to start at. Adding up our projections gives us this:

That leaves only 31 innings to be covered by replacement pitchers like Mark DiFelice, Chase Wright, and Chris Narveson. That seems to be good news on the surface, but remember that we're banking on at least 60 innings for Chris Capuano, and there's a possibility he doesn't pitch in the majors at all this year. But could it be that we're in better shape than we thought?

Well, for one thing, this team is not at all protected from any catastrophic injury. We can see here that there's a pretty major dropoff from our top 3 down to Seth and then Suppan. If any starter goes down, we're stuck with replacement-level pitching for the whole year, unless a trade is made. Even though our innings pitched estimates include a possibility of each pitcher missing some time, a major injury could wreck this staff.

This rotation projects to be about 10 wins above replacement. Paging through the actual WAR spreadsheet that will eventually contain the whole league's projections, we compare pretty well. I've noticed we're a little ahead of St. Louis, well ahead of Colorado, though substantially behind San Francisco.

Overall, however, I think this staff is a bit better than most of us assume. If the top three are healthy all year, we're looking at a pretty decent rotation with the possibility of upgrading at the trade deadline. I'd like to see another signing before spring training as much as anyone, but don't write off this team as having no chance just yet.

EDIT: So here's a bit of a graphic representation of how Parra and Bush can accumulate similar RARs. 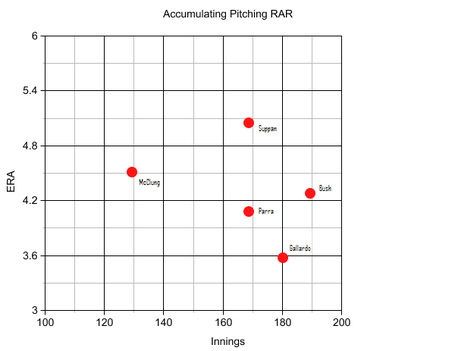