Need a pick-me-up to get through Friday afternoon? Just open up door #7 and find...Todd Coffey! 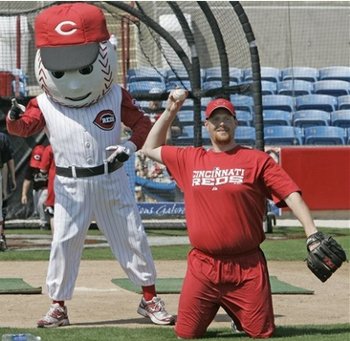 As the above picture suggests, Coffey has spent the bulk of his career with the Cincinnati Reds. He made his debut for the Red Stockings on April 19, 2005, and wound up pitching in 213 major league games for the Cincinnatis. After spending parts of four seasons in Cincinnati, he was designated for assignment on September 9th (some birthday gift, huh?) to make room for other players to be called up. The Brewers, needing a jolt in the bullpen, swooped in and claimed him off waivers. He pitched well for the Crew, appearing in nine games without allowing a run and striking out seven while walking two. He even won a game for good measure. Coffey will open 2009 competing for a spot in the Brewers bullpen. Hopefully he can build on his solid finish to the 2008 season.

Now for some interesting notes about Todd Coffey in stylish bullet point form: