Today, the Brewers launch a three game homestead with a rematch against the Padres.

It's Jeff Suppan v. Josh Geer today in Maryvale. These two pitchers met ten days ago, with Geer and the Padres getting the upper hand. Suppan rebounded with a nice start in his last appearance, pitching three shutout innings against the Cubs. Geer, on the other hand, allowed five runs on five extra base hits in two innings on Saturday. All told, Suppan has a 4.50 ERA in 8 Cactus League innings, with Geer posting an 11.25 ERA in 4.

As a group here at BCB, we're not exceptionally optimistic about Soup's 2009 season, but Brewers.com is taking it to the next level. Here's their promotion for today's game: 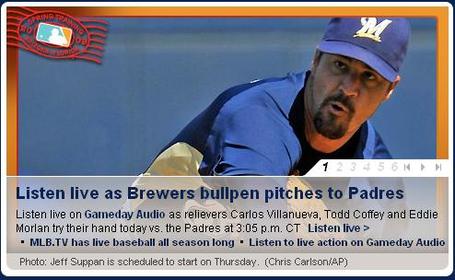 I wonder if they'll post the same thing on Opening Day.

Today's lineup, courtesy of the JS: