The Predictive Value of Streaks

Share All sharing options for: The Predictive Value of Streaks

J.J. Hardy is a pretty streaky hitter. It is a generally accepted consensus, and one I do not dispute. However, what we can look at is the predictive value of streaks, and how to determine if a streak will continue or if a good or bad streak is starting. So, here we will dive into some information. 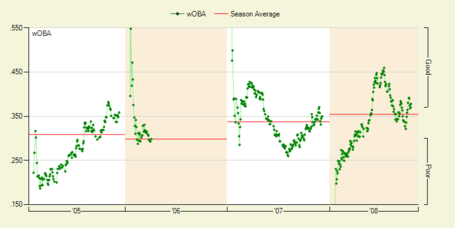 This graph shows that yes, J.J. has had pronounced changes in his batting wOBA over the course of the past three years-- a significantly up and down pattern, compared to most hitters.

Take everything I present here with a small sample disclaimer. The Book clearly proves that a large group of "hot hitters" perform, on average, just as you'd expect them to in the next game following a week of hot hitting. I am more interested in how Hardy specifically performs in this situation, to provide a real-life example of a player most of us consider to be very streaky.

For Hardy, I'll make the best of the data available and define a "hot streak" as consecutive games reaching base 2 or more times. In his career, J.J. has one such streak of 7 games, 2 of 6 games, and 3 or 5 games. This seems like a good place to start. For each of these streaks, I will take the next week of data and compare the lines.

During the streak, and then over the next 7 games:

After the samples of some hot hitting, J.J. performed over his career averages twice, and well under them twice. Seems that those weeks following the hot weeks are a pretty random group, something you'd expect if you pulled miscellaneous week samples out of his season.

Let's switch to the cold streaks. Do exceptionally bad stretches by J.J. have any predictive value? He has streaks of 12, 9, 7, 6, and 6 games with 1 or fewer times on base. Again, the format is the slash line during the streak and then the 7 games directly after the streak ended.

The first example is most interesting to me. For 52 at-bats last September, Hardy couldn't hit anything. .154/.154/.346 is a pathetic line, so should he have been benched (in reality or fantasy)? Well, a funny thing happened next: he went 3/5 in the very next game and went on to get on base more than 50% of the time in the next week.

These findings are pretty much what I would have expected to find, even with the problems in the data collection-- the nature of this type of data is that the very next game in the sequence is going to be a 0 or 1 times on base game for the hot streaks or a 1 or more times on base game after the cold streaks. Still, the point remains. There is almost no way to predict streaks for hitters. A player who is hot can go cold without warning. On the final day of every one of these streaks, a manager-- in fantasy or reality-- might have asked themselves if J.J. was going to snap out of the slump, or stay hot. And both types of managers would usually be best served by letting the superior player play and not trying to guess who has the "hot hand".

In general, I would highly recommend evaluating players based on their true skill level and awarding playing time on that basis. In some rare scenarios (Corey Hart's second half of 2008 might qualify), it might be justifiable to play a worse player due to a prolonged slump. But in general, even one of the streakiest players cannot give you a good idea of what will happen next. Adhere to the bigger picture.

Is J.J. Hardy a streaky hitter? Yes. I would argue that streakiness is not a bad thing, and may even be a good thing. My main point is that streakiness does not help us predict what will happen immediately following a streak-- and for that reason, there is little value in considering streaks. The hot kind are fun to watch, but there is little reason to form baseball philosophy based on them.