Josh ("dixieflatline") looked at Dave Bush's fatigue and quick dropoff in fastball velocity last season, and we know how quickly things can go bad for him late in his starts. We have spent lots of time looking for trends and patterns that might give us a clue as to when he is about to implode. Saturday night's game conjured up memories of past Bush implosions and Ned Yost sitting in the dugout, hoping Bushie could work out of the jam.

I have been doing some work on pulling data out of the Gameday archives from Mlb.com all on my own, and I wanted to test out some of these skills now that our former Pitch F/x analyst got called up to the majors. I took a look at Bush's data from Saturday night to see if there was a clear dropoff in velocity or movement prior to him loading the bases in the seventh inning.

I am pretty confident that these are the true 4-seam fastballs thrown by Bush last night. They are only the fastballs, so pitch 32 is actually pitch 91 of the game, the last 4-seam fastball Bush threw. Note that the blue line for movement is the opposite direction of velocity-- a pitch closer to the bottom of the graph has more movement.

An important note is that Bush threw 98 pitches, and the last fastball was pitch number 91. He threw 5 fastballs in a row, from pitches 86-91, and then completely abandoned the pitch. The fastballs were between Fontenot's walk and Theriot's single. During Hill's single and Hoffpauir's three pitch strikeout, Bush only threw cutters, changeups, and curves. The cutter is distinguishable from the fastball because it breaks the other way, away from a righty hitter. If the cutter movement was on this graph, they would be lined up on the positive side of the right side y-axis, because all of the fastballs break towards the right-handed hitter. 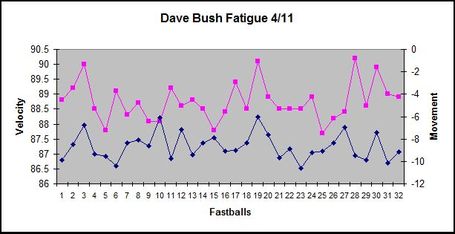 It looks like Bush's velocity stayed quite strong throughout this game, and though he lost some movement in the early at-bats of the seventh inning, nothing looked terribly wrong with his fastball. He stopped using it and eventually got out the strikeout. He averaged 88.75 MPH with his fastball, that is right in line with his 88.7 from the past two years.

I was thinking we might see a quick dropoff in the late sixth and early seventh innings for Bush, but that does not appear to be the case. It looks like factors other than fastball velocity caused Bush to begin his customary struggles in the seventh. After investigating last night, anyway, we will have to keep looking for some other type of warning sign for a Bush implosion. Maybe this is even a positive sign, that his fastball did not fall off is possibly an indicator that his stamina will be stronger this season.

In my long term Brew Crew Ball pitch f/x plans, I have 5 master files for the 5 starters right now and I am logging each start into a new sheet in each of their Excel workbooks. It is a kind of crude way to get past building an entire SQL database at this point, mostly because I lack the patience, time, and determination to build one and I lack the ability to query things. This setup should allow me to do a lot of fun things, however, that will just take a little more work to generate. I will be able to look at velocity and pitch selection trends over time, and look at specific pitches to see if they are more hittable or missable than others (like I attempted to do with Josh's former tool in this post). I will also be able to look at some release point data and make graphs of pitch location.