I took the family out to Miller Park last night for the Border Battle - Timber Rattlers vs. Chiefs game.  Thought that I would share some thoughts, observations and opinions.

First a note - it was my four year old son's first 'live' baseball game.  'He' got the tickets for his birthday last week and I knew that there was no way that we would make it to the end of the game so we left after 6 innings.  Anything after the 6th, I can't comment on.

We sat in section 115 just to the left of the first base dugout. Great tickets and worth every penny of the $10 admission to a game at Miller Park.

Robin Yount showed up at the game last night.  Don't know why.  But he spent a fair amount of time in front of the Brewers dugout which was being used by the Peoria Chiefs. The funny thing is that Robin was there for quite some time before anyone in the stands recognized him.  Then the ushers went to work for crowd control. 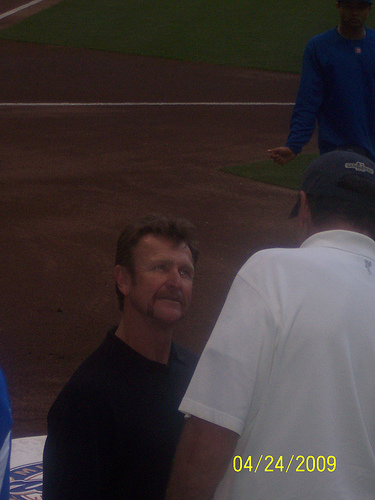 The person that he is talking to is Robin's old manager from Robin's days as a bench coach.  No not Neddy or Dale - but Bob Brenly. 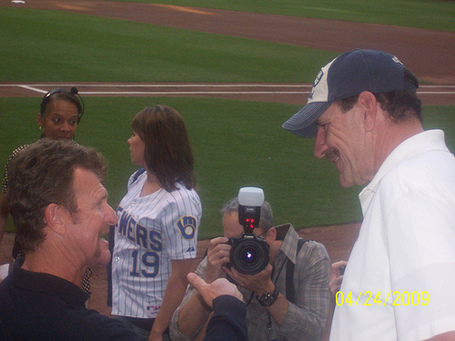 Apparently Bob's kid Michael is a catcher in the Cubs organization so he was in town to watch his kid play ball.

Robin threw out the first pitch - and I need a new camera - it just can't reset fast enough... 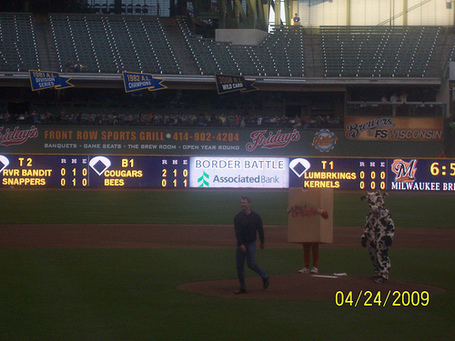 Then Willy Peralta got the game going for real. 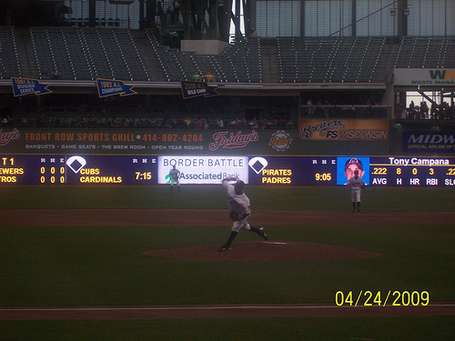 Willy had his crap together for the first two innings.  Then hit a wall in the 3rd.  He suffered from cantfindthestrikezoneitis and ended up grooving a few pitches that were hammered hard.

I love baseball - but I can't tell what pitchers throw.  I am just not that good, knowledgeable or whatever but unless it shows up on the gun @ 95 mph I don't know what was thrown so I can't provide any insight as to what wasn't working for him. Sorry.

Up at the plate

Cutter Dykstra needs to hit the weight room and eat some protein... the boy is small. 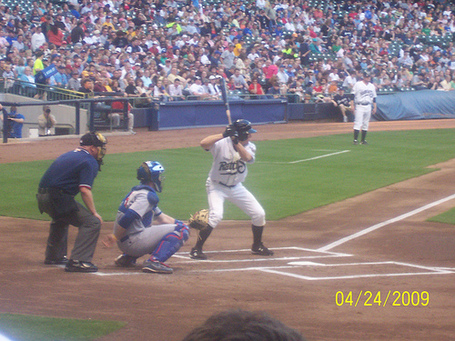 The picture doesn't convey how small he really is.  The T-Rats site has him listed at 5'11" & 180 lbs.  I think that he must have been wearing 2" platform shoes and 20 lbs of body weights when those measurements were taking.  But his lightweight makes him fast.  He can run.  His skills in CF still need some work.  On a few plays (line drives to be fair) he looked rather lost.  His CF skills kind of reminded me of Billy Hall when he first went to the outfield.  His speed really helped him make up for it though.

The player I went to go see the most was our first rounder - Mr. Brett Lawrie.  He certainly didn't disappoint.  Even to my untrained eye. 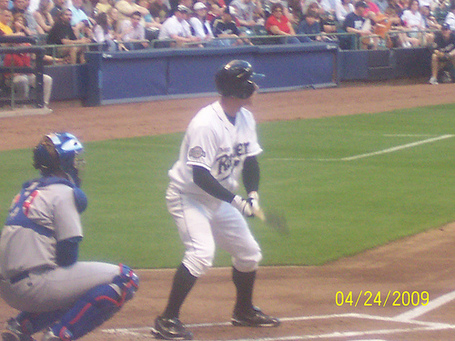 His first hit of the night went all of 60 inches when he hit a little nibbler off of the end of the bat.  His wheels let him beat it out.  The next time that he came up, he hit a rocket that the Chief's SS made a great diving catch on to take a hit away from him.

He also showed some leather in the field.  One play he ranged deep and far to his left and made a spinning throw in which the ump made a bad call - but like the players the umps in in Low A ball too.  He still showed good range on the few balls hit his way.

A few other notes on the game.

Brett Lawrie wasn't the only one to flash some leather for the T-Rats.  SS Michael Marseco made a great play ranging deep to his right on his knees to throw out Bob Brenly's kid.  The T-Rats site has Michael listed at 5'9" & 145 lbs.  He isn't that big.  The boy is a stick.  NO - I will take that back - he is a twig.  If he tips the scales at more than 120 lbs, I would be shocked.   But with small size comes speed.  He is another fast kid.

Brock Kjeldgaard (1B T-Rats) hit a shot out to the second deck in RF.  Otherwise his name was the coolest part of his game.  It also confirmed the coolness of baseball names at the game.  Cutter, Kjeldgaard and Rebel Ridling were all on the field last night.

Before the game during BP I overheard a conversation from a couple of ushers basically questioning how many of the players needed notes from their mommys to travel on the team bus.  The maturity level between a 24 year old Ryan Braun and a 22 year old A Ball player really is amazing.  The catcher Sean McCraw even has the 'my first peach fuzz mustache' growth on his upper lip.

The game was good.  The kids had fun.  It was minor league ball with mistakes and goofs.  i.e. Sean McCraw appealed a swing to the first base umpire for a left handed hitter.

I am glad the Brewers did this and the wife and I agreed that we will go up to Appleton with the kids to watch a game there.