Liberal Base Running vs Conservative Base Runner Defense

Share All sharing options for: Liberal Base Running vs Conservative Base Runner Defense

Yesterday Rickie Weeks was caught stealing to notch the third out of the 7th inning. This is at least the third time this season I could think of off the top of my head that the Brewers had left Ryan Braun standing at home plate while recording the final out of the inning on the bases. 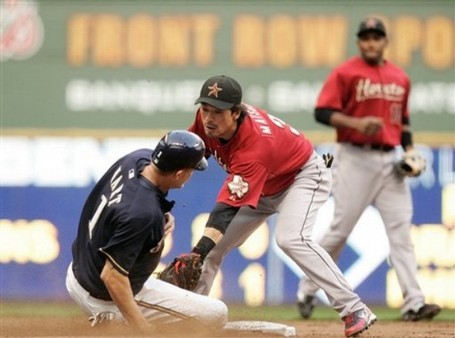 With the offensive prowess Braun, Fielder and Cameron have shown, especially in recent weeks, it made me wonder why Ken Macha is being so aggressive with base running while risking outs on the bases.

Yesterday's caught stealing happened in the same inning that Yovani Gallardo homered, giving the Brewers a 1-0 lead, meaning it was a chance for a rally that was killed with the meat of the order at the plate and on deck.

The whole thing is even more confusing when you think about how much time Brewers pitchers have spent checking on runners and holding them to their base. My thoughts on Seth McClung's overzealous runner checking were linked in the Mug last week.

Remember, too, that Ken Macha has taken over control of opponents' running game from Kendall/Rivera saying that he's got a better vantage point from the dugout. That means the obsessive throws to first and second have been at Macha's instruction.

It seems counter-intuitive for a manager to be so conservative in terms of defense on base runners but so seemingly reckless with offensive base runners.

So far this season, the Brewers have been caught stealing as many times as they've actually stolen a base - eight times each.

Corey was caught stealing just seven times in all of 2008, but has already been caught three times in 21 games in 2009 while successfully stealing just twice.

Last season, Rickie was caught five times. So far in 2009, he's been thrown out twice while stealing just one base.

Again with the small sample size, but don't those numbers speak for themselves?

Between the speed of both Weeks and Hart and the long-ball proclivity of Braun, Fielder and Cameron, why risk the out on the bases? A hit of any power that stays in the park gives both Weeks and Hart a decent chance of scoring from first. Any home run makes which base they're on irrelevant.

Is this a valid question on Macha's managerial style or is the aggressiveness only so shocking because we saw so little of it last season?