Why the Brewers are a Little Underrated

Share All sharing options for: Why the Brewers are a Little Underrated

Last year's Brewers team had, in total, about an 87-win true talent estimate. We can attribute the fact that they won 90 games to some clutch hitting, clutch/lucky bullpen pitching, and a little bit of luck.

Five of those wins were contributed by one CC Sabathia, and as you may have heard, he is no longer a Brewer. Another five came from Sheets. So the Brewers start this season with something pretty close to the same roster, with the only big additions being Trevor Hoffman and Braden Looper as well as some shuffling of bullpen arms and bench players. So we are looking at an 80-ish win true talent team, right?

Let's go back to the start of 2008. Projections would have put the Brewers at about 86 wins at that point, counting on effective seasons from Gallardo and Sheets. The loss of Gallardo, the fact that the offense underperformed, and the utter inteptitude of the bullpen (it had a total WAR of zero, meaning they contributed absolutely nothing to that 87-win true talent estimate of last year's team) dropped that true talent down to about 82. Sabathia was able to make up the deficit by himself, and the context-based factors I already mentioned bumped us up to 90 wins and a playoff spot.

So the Brewers are in a unique situation here of having lost two five-win players. The idea proposed here is that at least one of those five-win players is naturally replaced by doing nothing at all, mainly having the offense meet their projections and the bullpen performing even slightly above replacement level. To replace those other five wins, the Brewers can count on Looper and Hoffman to contribute a few wins, and any contributions from Gallardo can go there as well, considering he contributed almost no value in last year's "looking back" record.

To buy into this concept you have to recognize that the Brewers outperformed their context-neutral stats last year and "should have" won 87 games; to rephrase, if you played the season again, and every pitcher and hitter produced the exact same events, you would expect the Brewers to win 87 games. They lost 10 wins from that team, and replaced those ten wins with two players who are expected to provide about three. But what you are not seeing is that Gallardo's contributions, the expected improvement in offensive production, and the bullpen's return to respectability are going to bring up that expected win total to almost exactly where we started last year, and in a strange twist, almost exactly where we ended last year (I am referencing WAR-based record again, not actual record).

To expand a bit on the bullpen, we know that last year-- in context neutral evaluation, anyway-- it was absolutely awful, contributing nothing to the team. Maybe the three extra wins above the WAR-based expected record were in part due to the fact that the bullpen allowed fewer runs than their context-neutral stats would have suggested. This year, our projections give us a rough 3.96 WAR projection for the entire bullpen, led from about 1.5 wins from Villanueva, .75 from Hoffman, and another win from Stetter and Swindle (who got 30 innings in our projections).

I promised a wrapup offense projection post, and I will include it here because there is not a lot of commentary left to provide. The hitters project to total about 8 wins above average and about 24-25 more wins than a team of replacement-level players. Are we giving ourselves too much credit? Well, our hitting projections are in line with established systems like CHONE, and our offense totals are still lower than teams like Colorado and Chicago. And in actuality, the WARs of the position players last year are also around 24, mostly driven by bench players like Kapler and Branyan-- we have already established that the five core players can be expected to improve about 5 wins this year. Much of the offensive improvement is actually wiped out by our expectation of lesser bench performance. Still, it is likely that we will see some gains in the overall offensive production that will help make up those 10 wins. 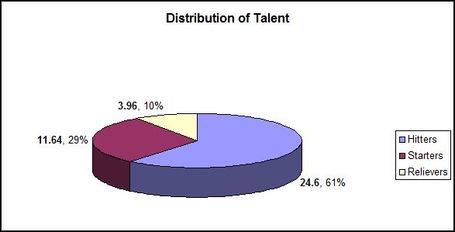 The overall spreadsheet for the WAR project that lists all of the community projections is right here. Click the MIL tab at the bottom of the page to see the final projections for all the players for yourself. Take the 88.7 win talent with a grain of salt at this point, all of the numbers in the project do seem a bit high-- which does make sense when you consider that many season-ending injuries will occur and though we account for players missing some time, we cannot predict these larger-scale injuries. So I am expecting that the whole league will be a bit higher in the wins category than would be possible.

Even though I am not bold enough to predict that 88.7 number, I think a valid case can be made that the Brewers got very close to replacing the ten wins they lost last year, though not necessarily by adding players. If I had to throw a number out there for the Brewers true talent right now, I would say 85 or 86 wins. Natural probability and randomness could put this team, if moderately healthy, in a 84-88 win window.

So to recap quickly-- how did we get from 87 last year to 85 or 86 this year? Start with 87. Subtract 5 for Sabathia and 5 for Sheets. Add about 1 or 2 for offensive improvement ("rebound", if you will), add 3 or 4 for gains from the bullpen and the additions of Hoffman and others, and add 4 for a season of Gallardo and the addition of Looper. This team is awfully close to where it was last year, even after considering the contributions of Sabathia.

How about we just let the national media continue to think that losing Sabathia is a blow that is impossible to overcome, though? That will make this season a lot more fun. Especially when all the stories about how Gallardo and Parra are single-handedly replacing CC and Sheets begin to come out.

This team is not as good as the team that the Brewers put on the field last September, that much is obvious. But when you step back and look at the overall picture, the projected record at the beginning of 2008, the "looking back" true-talent record for 2008, and our projected record right now are all within a few wins of each other.

We will keep an eye on all of our projections, and I plan to do a few posts for after the season comparing our projections to the major systems. Hopefully, the Beyond the Boxscore project will get pulled together soon, as well, so we can compare the Brewers to the other teams in the division. But I have to say that the future looks much more bright than I would have anticipated when preparations for this season (and this community projections project) began.

This team has a very good offense, a slightly above-average starting staff with good potential, a solid and about average bullpen. and plenty of depth. If you take away anything from this and the community projections project, make it be this: all of it adds up to an above-average team that should be considered a very viable wildcard contender. And there is always time to bring in some reinforcements at the deadline, or a new mercenary.

All of the projections are catalogued in the spreadsheet linked here for reference. You will notice that I never actually found the average averages of some bench players, because these were not relevant to the WAR spreadsheet. Everything else we projected should be listed there, and I will be interested to see how our projections line up to what actually occurs. Thanks to everyone for participating, it is an interesting project and we will be looking back at those throughout the year. For now, let us stop projecting; we get to see what actually happens.