Share All sharing options for: Some Manny Parra Fatigue Trends

KL asked me these three questions as a possibility for a piece this week:

1) Does his velocity slow or stuff significantly change as innings go along? Is his fastball at pitch 20 in an inning still as sharp?
2) Does his stuff change at all with runners on?
3) Does he tire out faster over the course of a game?

For this particular case, I am just looking at Parra's last start: May 17 against the Cardinals. He went 6 innings, walked 4, and struck out 3. That has been typical of his starts this year, solid efforts and some effectiveness but not much control. Can we draw any conclusions about his stuff in the situations described above based on this game?

I separated out Parra's fastballs (excluding the few that look like two-seamers) and listed them all in order, by inning. So each line is the progression of fastballs by inning, he threw 15 fastballs in the first inning, only 4 in the third, and 18 in his final inning (the sixth). It is a messy chart, but you can see that it does not really look like his fastball velocity is really falling off gradually within an inning, but the two in which he threw more than 11 fastballs he was only able to top his average velocity once out of 9 pitches. So in this particular game, Parra's velocity did fall off in his two long innings. As always, click the image to view a larger version.

Having fastball velocity drop off in long innings is something that is likely not unique to Parra. I would imagine that most pitchers lose something late in long innings, due to fatigue and the fact that they are struggling. He is capable of firing really good fastballs when fresh, and though he did drop off late in innings in this game, I would expect him to. 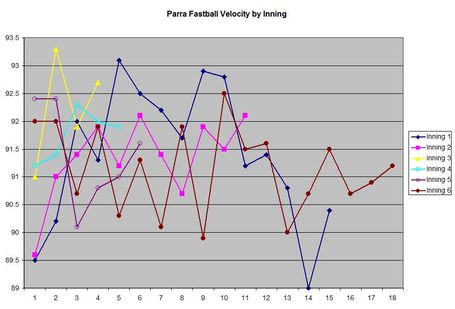 I will not copy the entire game fastball fatigue chart here, but the general trend is pretty consistent, so it does appear that Parra's overall fastball velocity did not drop off drastically later in the game. The inning-by-inning graph shows that there were not any innings that were major outliers. The graph shows a minor dip at the end of the first inning; then there was a little dropoff after pitch 39 followed by a rebound and then another slight drop before he was removed from the game. He threw 59 fastballs overall.

Determining when runners are on is a difficult manual task that I do not have time for right now. In general, Parra's breaking stuff is has inconsistent break (which is not necessarily a bad thing, I would think). Maybe I can pick these out another time and check out the data more formally, but for now I will just generalize.

If we were looking for a red flag to show that Parra has poor starting stamina or falls apart in long innings, I am not seeing one. If anything, he shows a pretty good ability vary his fastball velocity and conserve enough energy to throw hard in the later innings. I do not see a cause for concern there.

Sometimes the biggest finding is that there is not really a trend, or if there is, it is one I am not really seeing. I will continue to maintain that Parra is not really much different, fatigue-wise, than any other starting pitcher. His random and frustrating control lapses make it seem like he is mentally weak, but the truth is that he is a quality pitcher with good stuff who is still learning and becoming better. Even if he reverts back to last season's form, Parra is an above-average starter. I fully expect him to get better, and I do not think his season so far has been too bad after all.

I am also encouraged by Parra's pitch selection. A pitcher like him might have the tendency to begin throwing his fastball too much to compensate for control issues. That would almost certainly lead to Parra getting hit hard, because his fastball is quite hittable compared to his stellar breaking pitches. Parra threw a good variety of 25+ changes and 15 curves in his St. Louis start. His patience with developing these pitches should result in better control down the road, and the results are already coming through. With a 4.50 FIP and tRA right now, there is really no cause for concern and the only real question is if he will continue to be just slightly above average or if he will regain the control and be a number 2 caliber pitcher.