Share All sharing options for: Mike Cameron and Strikes

I saw this leaderboard about a week ago over at FanGraphs and was shocked to see Mike Cameron near the top in O-Swing%, or the percentage of pitches a batter swings at outside the strike zone. 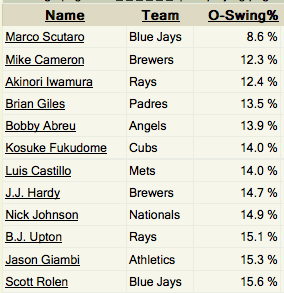 I mean, Cam has been known for his high number of strikeouts over his career, so to see that he doesn't have a propensity for swinging at bad pitches struck me as odd.

Turns out that Cam's had a good eye about that throughout his career despite his high number of strikeouts.

Clearly this season's SO numbers are much better than his career so far, but it's probably safe to assume that will regress as the season goes on.

The thing is, I can't decide what, if anything, we can take from this. I've been sitting on this for a week, hoping to come up with something better than "well, that's weird," but here I am with nothing better.

I absolutely find it strange that a guy who is known for striking out has been among the best in the league at not chasing balls over the past season and a half. And while his rank in O-Swing% hasn't been top 20 every season, it's high enough to say that this isn't a new development for Cam, I think.

But how is it possible for a guy to have a good enough eye to know that the pitch isn't in his strike zone, but then swing and miss at pitches that are in his wheelhouse?

As an aside, does this put Cam on the same "great eye, no coordination" level of Rickie Weeks? This takes us away from what the statistics mean, but in discussing it with KL Snow, he compared the two.

There are those that will shudder to lower Cam to Rickie's level, but look at it the other way - who out there wouldn't be thrilled with a 250 HR and SB career from Rickie? Assuming he can stay healthy, with his speed, isn't Cam's career like a best case scenario for Rickie?

Since I couldn't come up with any big conclusions, I'll leave it to you all.