It's nice to not fear the bullpen

Share All sharing options for: It's nice to not fear the bullpen

Sitting at today's game, we noted that at no point were we concerned about the lead that was amassed in the first three innings despite the fact that the Brewers failed to score any runs for the rest of the game, gave up seven hits, recorded three errors, and went to the bullpen in the sixth inning.

Being that sure of the bullpen was the most surprising of the reasons. It feels like it's been forever that there isn't a pitcher that I fear entering the game. There were quite a few guys last season that made us want to turn the game off, hide our eyes or just plain gave us the shivers while we worried how bad the damage would be.

Many would still argue that they fear Jorge Julio entering the game, but his ERA is now a manageable 5.71 - down from 8.40 just four appearances ago - and he's had a few successful outings of late, taking his scare factor way down.

That's a far cry from the bullpen situation at this time last season.

Take a look at the pitching stats from March/April and then May of last season. (from FanGraphs) 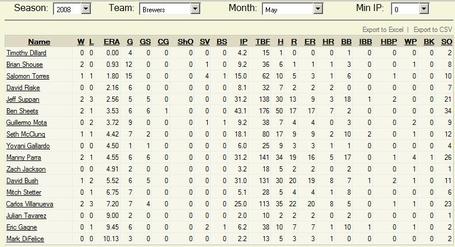 Compare that to the pitchers' numbers so far this season:

Riske and Swindle's numbers are from minimal appearances and they aren't even on the current roster, so you're talking about a full lineup of pitchers who's  ERA's are under 6.00. If you include Swindle and Riske, we have a team ERA of 5.28. Without them, it's down to 3.52.

Edit: turns out my stat skills are still far below par

relief ERA: 3.22 (includes one 2 ER in 1 IP appearance by Bush)
starting ERA: 4.41 (obviously does not include the Bush outing above)

Overall: 4.01 (our starters have pitched more than our relievers, so that’s why our ERA is higher than the average of the two above)

One of the biggest changes? Trevor Hoffman. Since he came off the DL on April 27, the bullpen's ERA is just 2.18. He has brought stability to the relievers. Apparently his mere presence in the bullpen is enough to scare Jorge Julio straight!