Taking the train to Wrigley Field

Share All sharing options for: Taking the train to Wrigley Field 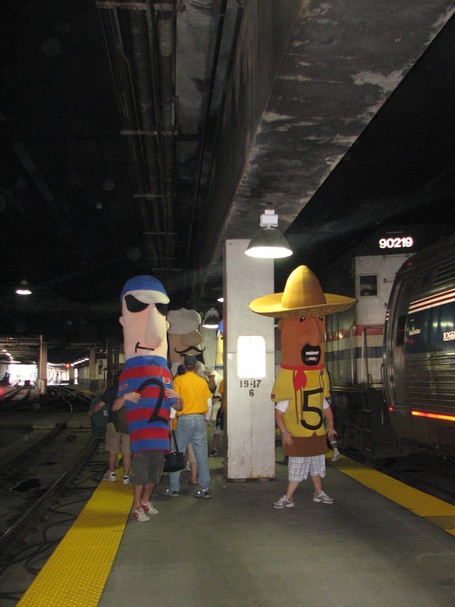 Before the season started, as single game tickets were going on sale, the Brewers announced a promotion where you could take your tickets to the Sept. 17th game between the Brewers and Cubs AT Wrigley Field to the Miller Park box office and they would give you a free t-shirt and vouchers for a free Amtrak ride from Milwaukee to Chicago and back that day.

For two happy, happy days I had full internet access at work and one of those days was when Cubs tickets went on sale, so I bought two cheapies in the upper deck and took my lunch to head to MP to get the vouchers. That feels like ages and ages ago and I've been looking forward to the trip ever since.

I've said before and I'll continue to laud them - the Brewers' marketing department is really, really good. They've come up with some really great promotions, this one included.

We heard the train station was packed for the earlier train, so we hustled to the train station for the 11 am train only to find the only people in the station were with the Brewers' group. The staff had everything organized and handed us new Miller Park South shirts. Even Bernie Brewer was there to welcome and entertain.

We loaded up the train and had two cars full of folks, it seemed. There were FSN and TMJ4 cameras, as well as some others. We were told Telly from FSN would be there with us, but we never saw them.

As the train headed South, we were also told that Bernie Brewer would be serving the snack cart, but we never did see him, either. It seemed Bernie kept to the car behind us.

A whole line of people also got onto the train at the airport station.

The one and only bad part of the trip is that the train rarely got above a slow crawl and therefore, the train was at least 30 to 40 minutes late pulling into Union Station in Chicago. Since we didn't leave Milwaukee until 11am, that put us on the El platform as first pitch was thrown - but that's getting ahead of the story.

As we pulled in, it was announced that if we didn't know how to get to the El station, the Racing Sausages would lead us in that direction. Instead, the Sausages were there on the platform to greet us and high five us as we deboarded.

It's possible the Sausages did head to the El from there, but frankly, we didn't wait to find out. It was a six or seven block walk to the El from Union Station, so those of us first off the train took off, knowing that first pitch was imminent. One girl got out the directions the Brewers had so nicely typed for us and a stream of us headed East across the river and in search of the Red Line El stop on State St.

One of the biggest suggestions I'd give to the Brewers were they to try this again next season is to pre-buy CTA tickets, or find some way that the large group of people isn't bottlenecked at the two machines selling fare cards at the bottom of the stairs. Having those in-hand would have made a huge difference.

As we were standing on the platform, the game started without us and I and a few others kept everyone updated via our cell phones, though service was spotty as we were underground. The trains were crowded to begin with, so we Brewer fans merely packed them to sardine levels as we headed the 10 or so stops to Addison.

We got off the train about the end of the first inning and were in our seats in Section 518 before the end of the second. All in all, I suppose that's not so bad, but with Amtrak's reputation for a lack of punctuality, it would really behoove the Brewers to not allow just 2 hours and 15 or so minutes for the train ride, walk and El ride. There was no way that was ever going to get us there on time.

Considering they were $16, our seats weren't bad. We didn't have to deal with too many support beams and we were right next to the press box.  We were certainly closer to the field than we would be in the 400 level at MP.

As you know, it was a great game, with Jody Gerut crossing home after hitting a grand slam. There was Trevor Time (More Trevor pics here) Prince didn't break the record, but took a mighty cut.

One of the strangest quirks I saw that Wrigley (since I don't have to pee in a trough) was the overly staffed, extremely slow grounds crew. Whereas each member of the MP crew has their own grate and they jog/run, the Wrigley crew had two men per grate and they literally strolled their way around the infield dirt. It was head-scratching. The BF missed it the first time and thought I was exaggerating. Once he saw it himself later in the game, he was as awed by it as I was.

There was a lot of sarcastic speculation about where the Racing Sausages would show up during the game, which was answered when they appeared on one of the infamous rooftops. Bernie and the Sausages were on the far west side of Waveland, barely visible down the third-base line.

Though he's a Cub, I have must love for reliever Aaron Heilman and his beautiful, classic stirrups.

We had a lot of time to kill on the train and we were saying that aside from the obvious, I'd hate to be a Cubs fan because of all the day games. Still, they're usually completely sold out, but the stadium seemed pretty empty (this is the first base side.)

In the end, there was untucking and outfield leaps, along with on-field handshakes, which just look so pretty against all that ivy.

One more look at the win on the old-school scoreboard.

The boyfriend has a co-worker who's a Cubs fan who claimed there was a "W" flag for wins, but not an "L" flag for losses, so we had to prove him wrong.

Because of the late train, we didn't get to spend much time around Wrigley. I've been to a few games there, but the boyfriend had never been, so that was sad.


With time to kill before we needed to catch the train back, we walked over to Millennium Park. There was some sort of concert going on in the band shell which was cool, but we were more interested in taking pictures at the cloud/bean.

From there it was a long, sore-footed walk back to Union Station and a noisy train ride back to Milwaukee.