Excerpts from the Digital Prospect Guide

Share All sharing options for: Excerpts from the Digital Prospect Guide

If you read the Mug, you've probably heard of Project Prospect, one of my favorite sources of prospect information and scouting reports from around the minor leagues. This year, they're producing a Digital Prospect Guide for the first time, and they've invited me to share a look inside with you.

Here's an example of how it looks: the section on Orioles' pitcher Brian Matusz: 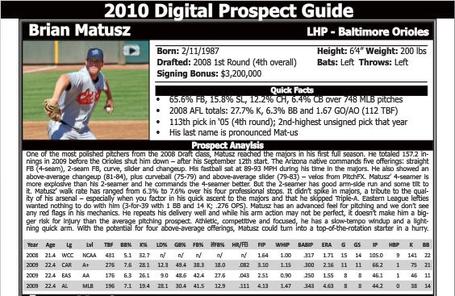 As you can see, it looks great and it's got a bunch of information. In a feature I'm not sure you could find collected anywhere else, there's also video footage where available: you might have noticed the "play" button in Matusz's picture above. Here's Alcides Escobar's scouting report:

Escobar may never develop into more than an average MLB hitter, but his up-the-middle defense will make him a valuable big leaguer. With good footwork, a very strong arm and well-above-average speed, he’s already an elite defensive shortstop. Escobar does a good job staying centered over his rear leg despite having aggressive actions in his swing. He has good bat speed and has been able to hit an average amount of line drives. His flat swing plane has helped him maintain above-average contact rates throughout his minor league career. Not surprisingly, Escobar is an above-average contact hitter. Even though he swings at almost everything, he has improved his patience over the last few seasons (went from 5.2% BB in AA to 6.6 in AAA). His lack of fly balls will allow more of his batted balls to turn into hits than most players. But he’s largely a slap hitter – has very little lift in his swing – and he may initially struggle to put up double-digit home run totals. He does, however, have wiry, quick twitch strength that will allow him to pull some balls out of the park. Though he doesn’t have the same kind of power, Escobar has a bit of Jorge Cantu in his swing pattern. Escobar is big-league-ready. The Brewers dealt J.J. Hardy, who was their starting shortstop from 2005-2009, to clear a starting job for Escobar in 2010. He backed up their confidence in him by stringing together 199 successful plate appearances in the Venezuelan Winter League. Escobar’s glove gives him a very high floor. He could be an average regular in his first full MLB season. If he can find a way to make fewer outs and increase his power, he could become a well-above-average big leaguer.

The Full DPG will contain reports like this for 300 players, including roughly 8-12 more Brewers. At $40 for 300 prospects, it's a more expensive option than John Sickels' Prospect Guide, but it's up to you to decide if the additional pictures and longer reports (on fewer players) are worth it. If you're passionate about the minor leagues, you should probably have both.

If you're interested in pre-ordering, you can do so here.