Share All sharing options for: A New Look Crew? Part 1

No, I'm not talking about another free agent signing or a big trade, this time the new look involves the shirts on their backs.

On Wednesday, the Brewers announced plans for a 40th anniversary celebration that includes three weekends in which the team will wear retro jerseys that will no doubt approximate, but not quite duplicate what was worn during the era being celebrated.

But this isn't the only uniform-related news coming out of the clubhouse. It has also been hinted via an email exchange between a friend and Brewers front office members that there will be a uniform announcement happening at the On Deck event.

Based on pointed questions and non-answers through the email and via the Brewers Facebook page, the best guess is that change will be that away jerseys will now be featuring "Milwaukee" across the chest. Currently, the Brewers are one of only a handful of teams that don't have their city name on their away jersey.

The talk of uniforms and history often leads to a discussion of the current logo and uniform set and what changes, if any, people would like to see. The use of the pinstripes over the past few seasons has sparked more than one debate over whether they were necessary and how the current team hasn't been a fan of honoring the past when it overshadows the present.

Re-branding the team and changing their uniforms has happened every decade or so with this club and MLB has restrictions on how often the team can make changes and when they can take effect (remember the Chorizo)?

That means that were the Brewers looking to change the team's look in the next 2-4 years, the work on it would be happening now so that it could be presented to, and approved by, the MLB 12-18 months before it were to be implemented.

So why not give them some suggestions?

I'm a member of the community over at Uni Watch, whose tag line is "The obsessive study of athletic aesthetics." A few months ago, Paul Lukas, who runs the blog, invited his readers to submit their ideas for how to update, improve or change the current Brewers logo and uniform set. The response was huge.

I received permission from Paul and quite a few of the submitters and after the jump you'll find part one of this two-part series featuring their ideas and suggestions for the team.

The first submissions come from Chance Michaels, who runs the Borchert Field blog. If you're not familiar with his site, "the online museum of the American Association Milwaukee Brewers, 1902-1952," you should check it out.

Chance has sent his uniform suggestions to the Brewers on a few occasions, but has never heard anything in response.

He's not a fan of the current uniform set, which he describes as "sterile and plain, designed by committee, but worst of all they have no connection with Milwaukee's rich baseball history," so he's created two very distinct uniform sets that are steeped in the history of the ball club.

In his first set, he uses a script similar to that used by Leinenkugel's brewery that also happens to be very similar to the font used by the Brewers in the 1950s. 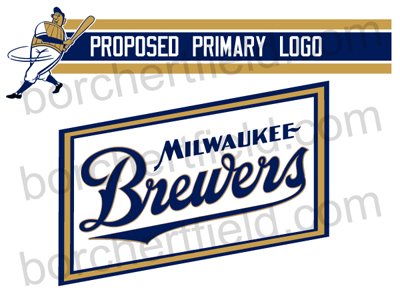 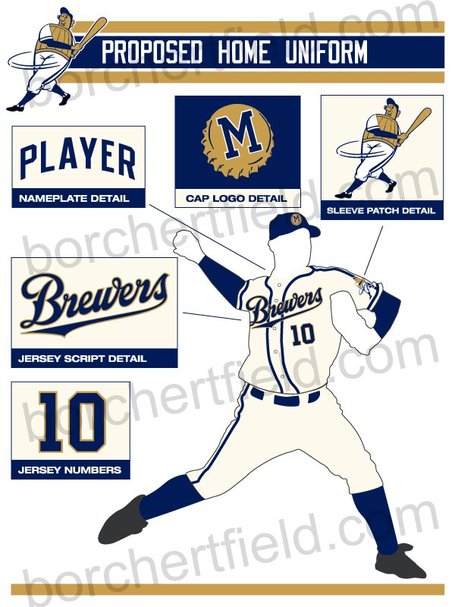 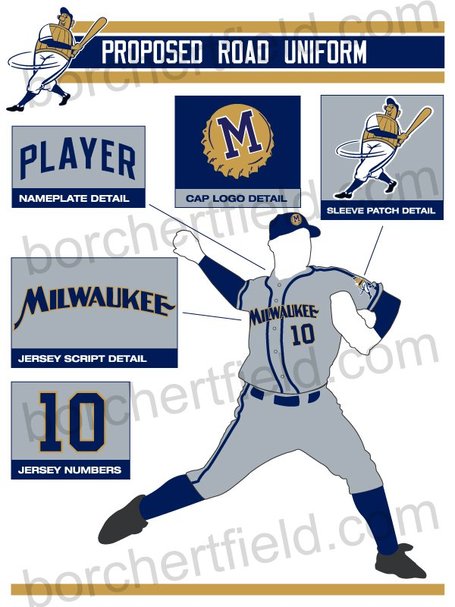 Chance is high on the return of the barrel man logo, not only for marketability but also because it was used by the American Association Brewers and was worn by Hank Aaron through his career in Milwaukee - it has history.

My favorite part of this first look is the piping all over the jersey.

This second set by Chance is heavily influenced by the Milwaukee Braves and is what he calls "a new classic." By going with a simple design that he says is classic and timeless, the Brewers would prevent the style from becoming passe and would follow along the successful line of harkening back to the 40s and 50s that teams like the Reds and White Sox have done.

Obviously high on the history and tradition of the game of baseball, many of Chance's decisions are based on keeping the team relevant which honoring those that have worn the uniform before.

The red was used by the AA Brewers and adding it to the current navy and gold color scheme, Chance says, creates a timeless color set not used by any other team. 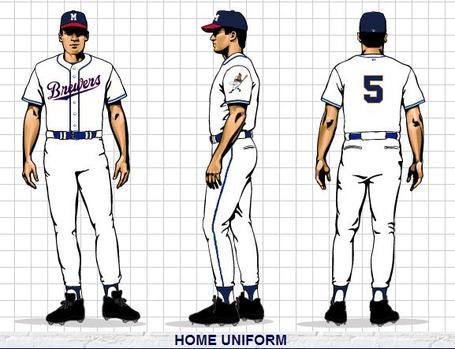 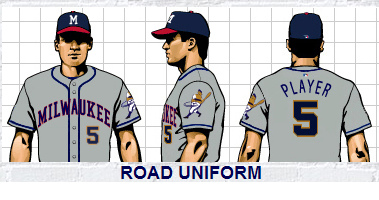 The second suggestion comes from Andrew Greenwood. A fan of the jerseys from the ball and glove logo era, Andrew also took inspiration from the Milwaukee Bears negro league jerseys that were worn this past season. Instead of the "old gold" used on the current uniforms, he'd like to see the yellow gold that was used in the 80s matched with the brighter blue of the Milwaukee Bears uniforms.

He'd also like to see the Brewers move away from white to an eggshell color. Instead of the orange cream or sand tones other teams wear, he'd like to see the Brewers cream jerseys lean towards a gold tone, to go with the color scheme. The road jersey is actually not a vest, but instead has colored sleeves like those on the Bears jerseys worn during the 2009 season. 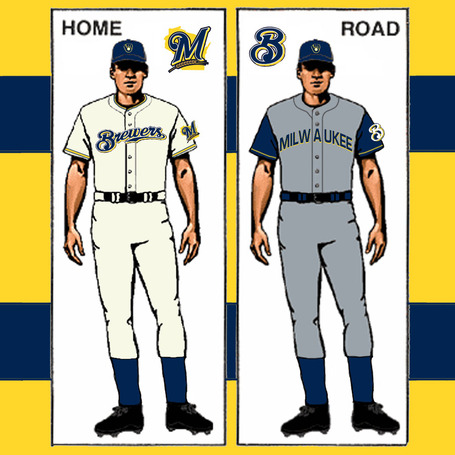 The next design comes from Paul Radetsky, who didn't explain why he chose what he did but clearly did a lot of work. Notice the vest in the pinstripe option, the ball in glove logo within the state of Wisconsin on the sleeve patch and the piping on the away jersey.

I'm partial to high socks and stirrups, so I love the look he's created with the logo on the leg a la the Phillies with their Liberty Bell logo. 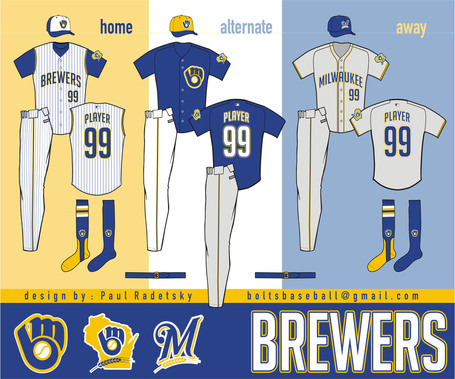 Notice each of the submitters use the "Milwaukee" wordmark on the away jersey. Clearly it's something the fans who are passionate about such things want to see happen, so here's hoping the teasers I received about the On Deck announcement aren't wrong.

Great job to all these guys for their clearly thoughtful and time-consuming work. I hope I only have to say once that while like or dislike is part of the discussion, we owe these guys to be respectful of their work.

So what do you think? If we assume a uniform and logo update or change is on the horizon, would you like to see it be one of these?

What suggestions do you have? Think you can do better? What would you like to see stay and what could go without you missing it at all?

Remember to check back tomorrow for another set of ideas.