Share All sharing options for: A New Look Crew? Part 2

In case you missed it yesterday, be sure to check out yesterday's post on this topic - click here.

Working on the assumption that a uniform change takes years to implement and get approved by MLB, if the Brewers follow their precedent of re-branding every decade or so, those changes are already in the works.

So  why not give them some suggestions.

Follow the jump for more uniform concepts and suggestions.

Here's what Kevin had to say about his design: "As you can see I am a big fan of the "Barrel Man", which I feel is a much stronger and livelier logo than the much ballyhooed "mb Glove". The glove logo is simply clever and that’s all. Barrel Man is clever and has a personality that is lacking in the glove logo. I kept the Pilots’ Blue and Gold even though Red, White and Blue would be more traditional. While it is imperative that the city name be on the road uni, I understand that "Milwaukee" is possibly too long." 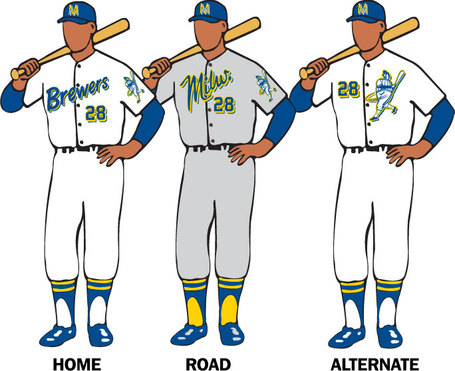 The next set of submissions come from David "Frosty" Frost, who not only comes up with concepts for new jerseys, but goes on to make him own prototypes. Every one of these pics is of a piece Frosty has made DIY style.

Interested in what you see? He has been known to sell some of his creations.

Contact him at frostymugs (at) sc (dot) rr (dot) com

Frosty made this first jersey as sort of a dream jersey - he loved the pinstripes on the home jersey and felt their should be continuity between the home and away jerseys. He, too, wishes for the Milwaukee on the away jersey and loves how it looks in the old script. 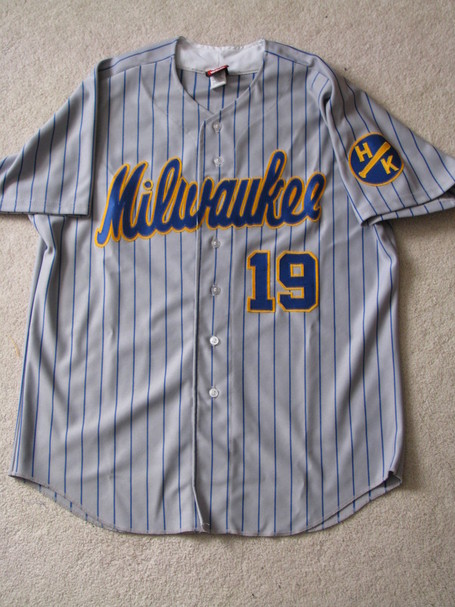 The next DIY from Frosty is actually a "real" version of the script and colors Chance suggested yesterday, including the older version Barrel Man as a sleeve patch. 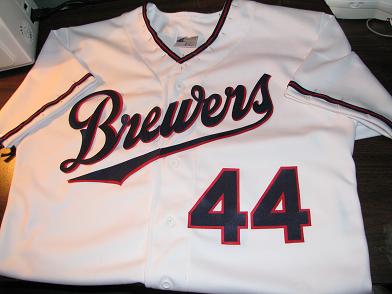 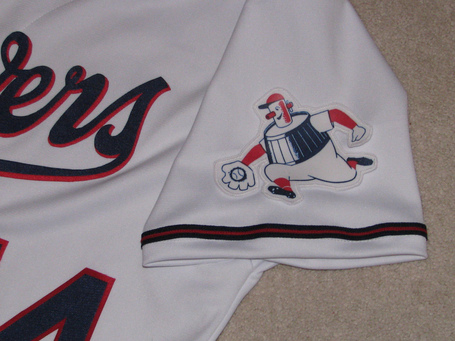 The next two pictures are of Brewers AA concept DIY's. 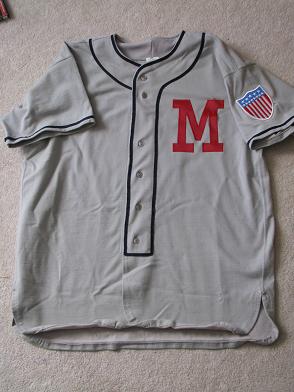 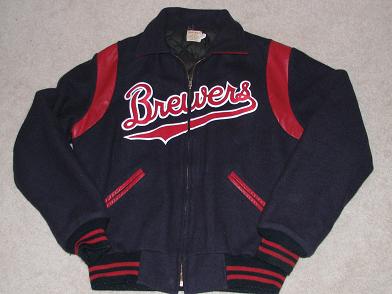 Here's an amazing jacket Frosty made. 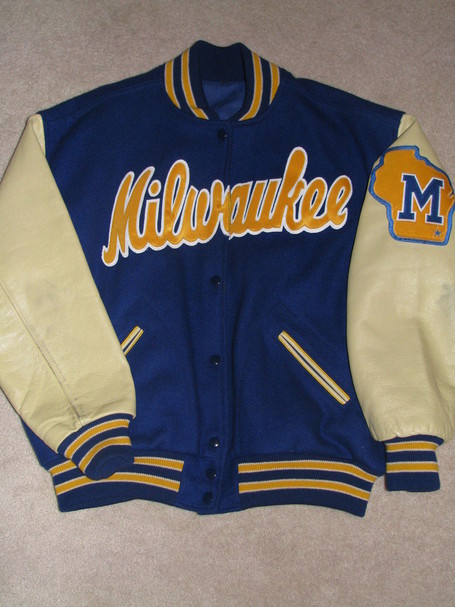 And lastly, here's a pretty broad concept jersey Frosty made, once again utilizing the Barrel Man and "was made possible thanks to some of the current Phillies braid I came across. The finish down the shoulders has always been a classy look to me, so I went with that, a classic front font in red/white, and our barrelman again on left sleeve." 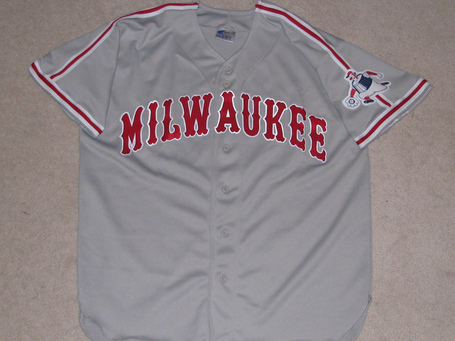 Our final set of concepts come from David Timmerman, who happens to be the news editor at the Grant County Herald Independent.

David has provided quite a few options and tweaks on his basic design concept. You'll notice a many of his designs resemble the Pilots jerseys that the Brewers wore when the team first moved here. He's also not a fan of the current "shiny" gold used on the jerseys, saying ball players shouldn't sparkle.

According to David, "I tried to mix some history into the current uni set, staying away from wholesale changes. A lifelong Brewers fan, I wanted to see some history incorporated into the mix, some more subtle than others."

For the road jersey on the right, David says "I altered the grey, adding more blue, and darkening them a little. I wish I could mock-up one that was alittle shinier, similar to Georgetown’s unis and harken back to the late 1940s satin jerseys teams wore for nighttime games on television." 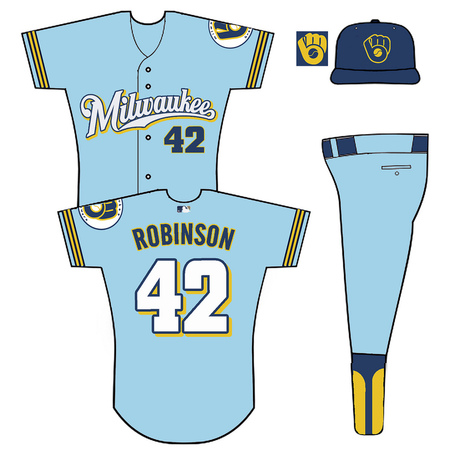 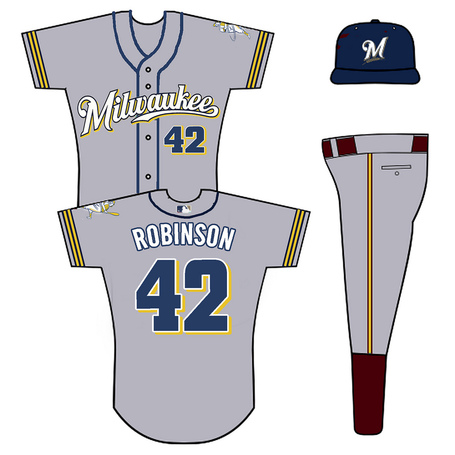 David toyed with the use of piping and color as well as font size and the outline of the ball and glove logo in this second set. 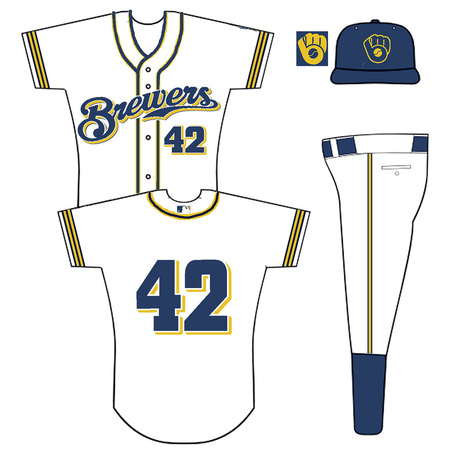 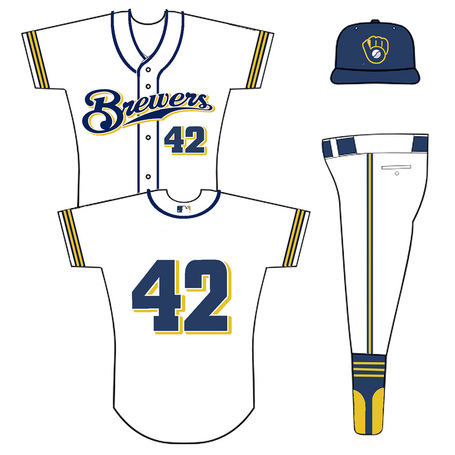 Notice the dark blue Milwaukee on the left side and the yellow brim on the cap on the right. 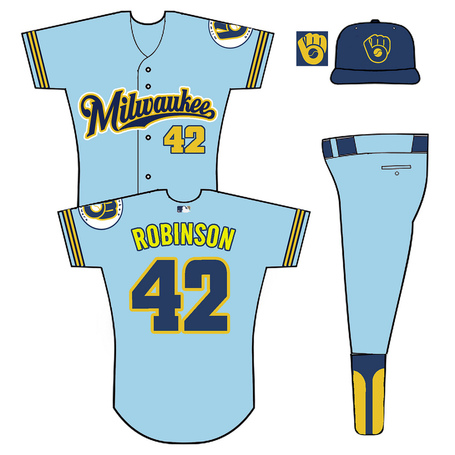 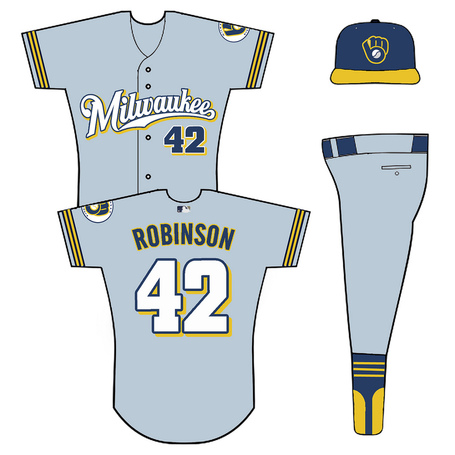 These final two looks are a bit more conceptual.

These new jerseys have "the darker tones that usually grace the practice uniforms, while tossing the stripes and piping. I have added muted blue strips below the armpits, similar to some football uniforms, but these are not meant to reach out of the pit onto the front of the jersey, merely run down the sides. With Milwaukee training in Arizona, these strips would be made of a highly breathable, and stretchable material, and utilize ‘Dry’-Cool’ fabrics."

Lastly, on the left is a pretty cool concept that carries a lot of history. Notice the cap - the M with barley really jumps off that old gold circle.

David says he's an amateur historian and uses both Marquette and the old Acme Packers in their blue and gold as inspiration. Since both those teams encircled their numbers, David thought the concept could be extended to the Brewers.

Per David: "Baseballs are round, and what better way to determine the arch of the nameplate on the back than with a circle. I decided to add a tint to the home jersey, because I think a few teams can pull that look off, and also incorporate the jersey number on the pants as well. Kept the piping to a minimum, and modified the tail under ‘Brewers’ which looks more classic, or generic, depending on your opinion." 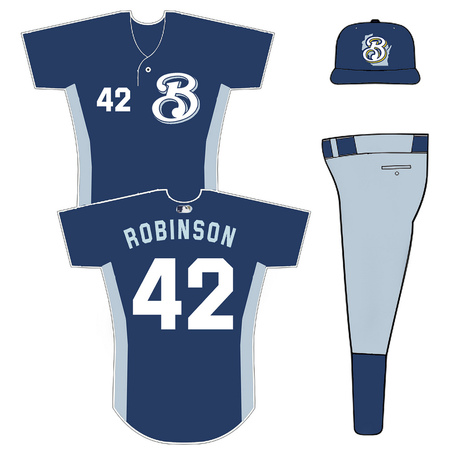 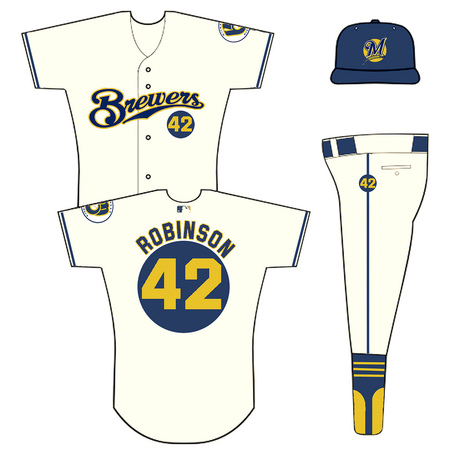 So there you go. Plenty more options for you to dissect and discuss.