The Tale of the Tape: Getting Derrick Turnbow one last win

Share All sharing options for: The Tale of the Tape: Getting Derrick Turnbow one last win

As you've likely heard, former Brewer Derrick Turnbow's career hit a major bump in the road this week, as Turnbow was released by the Marlins after experiencing pain in his shoulder during a game on Tuesday. Turnbow hasn't pitched in a Brewer uniform since April of 2008, but he will likely always be a cult hero in Milwaukee for his 2005 season, when he came out of nowhere to tie a Brewer record with 39 saves, while posting a 1.74 ERA.

Let's review what we know about Turnbow: He was wild, a little unpredictable, and a cult hero. Is it just me, or is this exactly the kind of guy you'd compare to an American Gladiator?

Fortunately, there's a Gladiator perfectly suited for the task at hand: 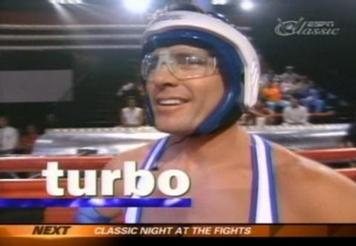 Ladies and gentlemen, let's check the Tale of the Tape: