In what we hope will become a weekly discussion, here are some of the things we noticed:

*Friday's Jackie Robinson tribute game not only featured every player in #42 jerseys, but also Ryan Braun in white shoes which were apparently approved by the league for the day.

*Speaking of Ryan's footwear, he normally wears black cleats, but Saturday he seemed to be wearing navy and gold cleats. No pictures, but we'll have to wait and see if those are regular wear.

*Prince has what appears to be a piece of velcro sewn along the top of the placket in his navy jersey, but almost always has the jersey unbuttoned down to the second button, which would negate the need to velcro the top closed. You can see it a bit in this picture: 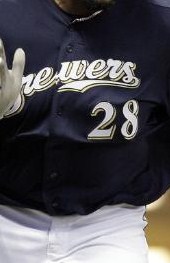 *Maybe it's the length of the word, but the new-this-year Milwaukee away jerseys make me feel like the Milwaukee is sliding off the jersey. I noticed it first on Prince and assumed it was how oversized he wears his jersey, but in this picture, it feels like the same thing is happening on Rickie's jersey in the background. 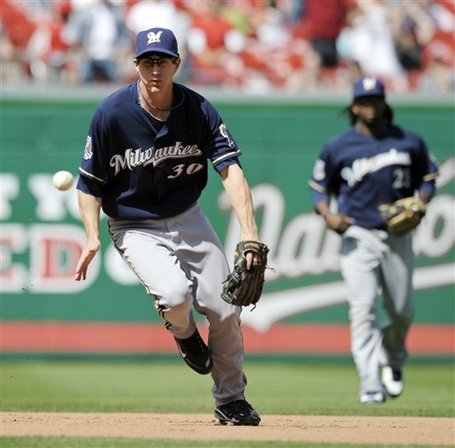 *Of course, it looks perfectly fine on Doug Davis. 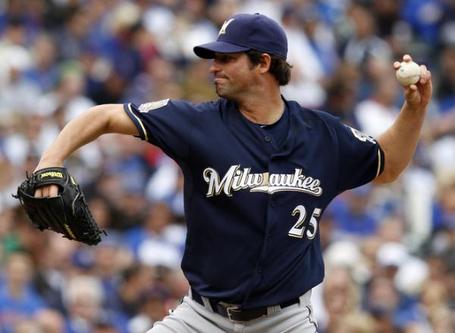 *Presumably to protect his super fragile wrist sheath, Rickie Weeks has taken to wearing a pretty elaborate wrap when he's on the bases. 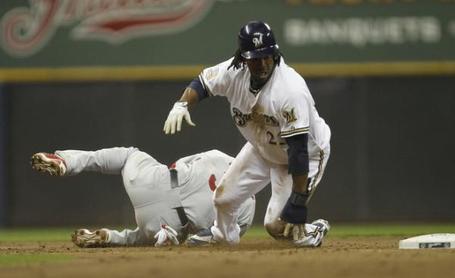 *He doesn't have it on, however, when he's batting. I hadn't realized Rickie was wearing this while on the base paths and a camera shot of first base coach Ed Sedar with it on led to a lot of head scratching Saturday night at the BCB meetup. 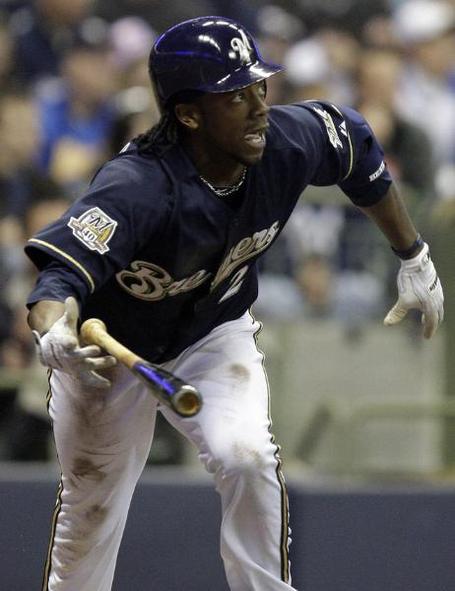 *Also seen but not heard at the meetup was a few minutes in the dugout where the bottom of Yovani Gallardo's shoes were being sprayed with what is assumed to be some sort of cooking spray. I heard Rock say that whatever it was it was almost certainly the brainchild of pitching coach Rick Peterson. The event happened as the rains started, leading us to assume it was to help keep mound dirt from sticking. Anyone that has screen caps or an explanation for this, I'd love to hear it.

*Lastly, the Padres and Braves wore throwbacks this week and SD outfielder Kyle Banks had the perfect, time-appropriate legwear look. 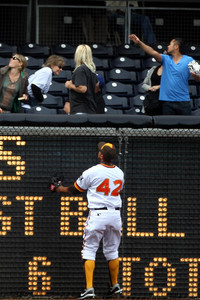 Email me at nicole (dot) haase (at) gmail (dot) com and try to get me some pictures or screen shots!