In 1980 the Brewers took a small step backwards, winning "only" 86 games, compared to the 95 that they won in 1979. Buck Rodgers was at the helm for game 1, as George Bamberger was ill. The Red Sox rolled into County Stadium to kick off the 80s. They threw a lineup featuring four HOFers at the Brewers, however, they could have used a couple more.

Jim Slaton got the first start in the 80s for the Brewers, and he pitched into the 9th inning spreading out 5 runs. Butch Hobson and Carl Yastrzemski touched Slaton for homeruns, and the game was tied at 5 heading into the bottom of the 9th inning.

Red Sox manager called Dick Drago into the game, to get the Red Sox into extra innings. Paul Molitor lead off the inning with a single, and Cecil Cooper sacrificed him over to 2nd. Dick Davis popped up to Tony Perez for the second out. The Red Sox IBB'd Ben Oglivie, and Gorman Thomas also drew a walk, leaving the bases loaded with 2 outs. Dick Drago was a decent pitcher, but was no match for the greatest Milwaukee Brewer of all-time, Sixto Lezcano (show below). Lezcano promptly took Drago out of the park, with a walkoff, grand slam opening day victory. 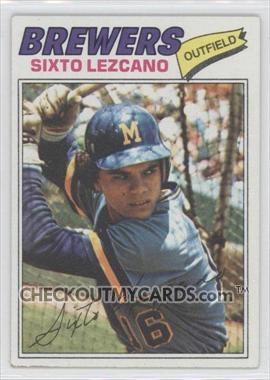 Money, Molitor and Oglivie also homered in the game, and Sixto Lezcano's 9th inning jackshot was actually the second of the game he hit, as he homered off of HOFer Dennis Eckersley in the 4th inning.

If one were to rank all of the home openers in Milwaukee, 1980 would probably be on top of the list. Even though the Brewers ended up not meeting expectations in 1980, they certainly started the season off with a bang.

1981 would be a season marred by a players' strike, with the Brewers only playing only 109 games. 1981 would also be the first year the the Brewers made the playoffs and have a Cy Young and MVP winner. George Bamberger stepped down after the 1980 season to deal with his health issues, and Buck Rodgers took over the Brewers helm permanently.

In the off-season the Brewers traded Sixto Lezcano for Ted Simmons, Rollie Fingers, and Pete Vuckovich. Fingers would have a monster 1981 season winning both the AL MVP and Cy Young awards.

The Brewers were powered by home runs from Gorman Thomas and Larry Hisle, and lefty Mike Caldwell pitched good enough to secure the opening day victory against the Tribe. MVP closer Rollie Fingers nailed down his first save. 1981 also marked the first OD start for long time Brewer, Jim Gantner, and the last OD start for long-time Brewer Don Money.

In 1982 the Brewers played their first home opener in Canada. Buck Rodgers started the 1982 campaign as manager, however he was replaced by Harvey Kuenn after going 23-24 to start the season. For the second straight season the Brewers would make the AL playoffs and bring home the MVP trophy (Yount), and Cy Young award (Vuckovich)

Former Brewer Mark Bomback got the start for the Jays, and only got one out, before giving up 6 runs, in what was probably the worst start by a pitcher in MLB opening day history. Pete Vuckovich pitched as well as you need to when your offense generates 15 runs to get the win.

Cooper, Oglivie and Yount all had 3 hits for the Brewers, and Oglivie homered in his second straight opening day. 1982 would also mark the last OD start for Larry Hisle, who after his MVP-caliber campaign in 1978, only managed to play in roughly 25 games the next 4 seasons.

The Brewers struggled to score runs against Bruce Kison, and went into the 9th trailing 3-1. The Brewers however mounted a rally, scoring one run, but Andy Hassler got Cecil Cooper to ground out with runners on 2nd and 3rd to end the game.

Roy Howell got the start at DH for the Brewers (shown below). He was terrible. 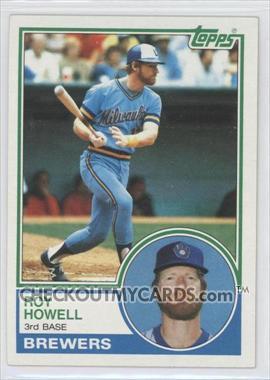 Harvey Kuenn was replaced in the off-season by manager Rene Lachemann, who was an unsuccessful manager with the Seattle Mariners from 1981-1983. The Brewers would only win 67 games in 1984 and Lachemann would be fired at the end of the season.

Noticeably absent from the lineup was Paul Molitor who was injured and replaced by Randy Ready. Jim Sundberg took over at catcher for Ted Simmons, and Don Sutton made his second consecutive OD start.

The Brewers were actually in good shape to win the game, as the Brewers enjoyed a 5-2 lead heading into the bottom of the 9th. Future Brewers manager Dave Lopes hit a HR off of Chuck Porter and an Jim Gantner error ushered in a 6-5 win for the A's.

George Bamberger returned to manage the Brewers in 1985, however, the Brewers still managed to lose 90 games. The White Sox led by Tony LaRussa, made the short trip to County Stadium to kick off the 1985 season.

HOFer Tom Seaver managed to hold the Brewers to 2 runs, as the Brewers struggled to put hits together. Moose Haas got his first OD start for the Brewers, as did current TV "analyst" Bill Schroeder. Brian Giles filled in for Robin Yount at SS, and Yount made his first OF opening day start.

I shuddered to see Doug Loman's name in this lineup (shown below), as I would never have guessed that Loman would have been an OD starter. I remember reading an article about Loman as a kid, describing how he would "put himself in a trance" during each AB. For some reason that pissed me off. In all fairness, Loman did hit a 2b off of Seaver. 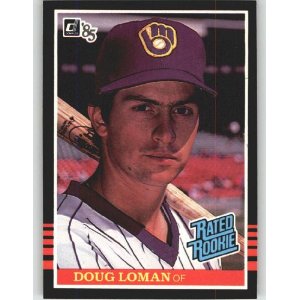 In a rematch from the previous year, the Brewers traveled to Comisky Park to take on the White Sox in 1986. This would be the last Brewer OD that George Bamberger would be a part of, as he would be replaced at the end of the season by Tom Treblehorn.

1986 ushered in a lot of changes to what had been a very stable OD lineup. Gone were Brewer stars Cecil Cooper, Ben Oglivie and Ted Simmons, replacing them were a bunch of guys no one remembers with the exception of Billy Joe Robidoux (shown below). 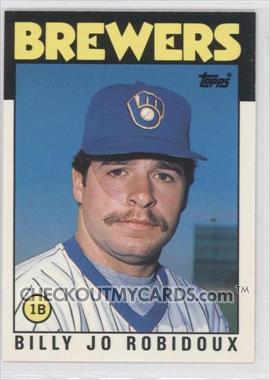 Lefty Teddy Higuera out-dueled HOFer Tom Seaver pitching 7 innings for the Brewers. Rob Deer in his first OD start as a Brewer hit a HR as did SS Ernie Riles. The Brewers would go on to win 77 games in 1986.

1987 is a season remembered very fondly by many Brewer fans, as the year the Brewers started out the season with 13 straight victories. Tom Treblehorn in his first OD, started "The Streak" against the 1986 AL Champs, Boston Red Sox.

While the 1987 season would end in disappointment, it did mark the return to the 90+ wins plateau for the Brewers, as the 1987 team managed to rack up 91 wins.

Tom Treblehorn took the Brewers on the road, to Memorial Stadium in 1988. Coached by Cal Ripken Sr., the O's had a lineup that featured HOFers, Cal Ripken Jr. and Eddie Murray. Teddy Higuera made his 3rd consecutive OD start for the Brewers.

For the second straight season Teddy Higuera pitched 7 shutout innings and Dan Plesac pitched the ninth, to secure a OD win for the Brewers.

Rob Deer got a couple of doubles and Dale Sveum hit a HR, helping the Brewers score 12 runs. Rookie catcher BJ Surhoff also chipped in with 2 hits and 3 runs in his first OD start.

1989 would close out the 80s for the Brewers, as Tom Treblehorn's squad would only win 81 games. Game 1 was played in Cleveland against the Tribe.

Olympian Don August, pitched well for the Brewers, only giving up 2 runs in 8 innings, however, he was out-pitched by his Olympian teammate Greg Swindell.  The Brewers managed to only scratch out 5 hits against Swindell, and never managed to mount much of a threat.

Gus Polidor filled in for an injured Paul Molitor, and Brewer rookies Gary Sheffield and Joey Meyer (shown below) made their OD debuts. 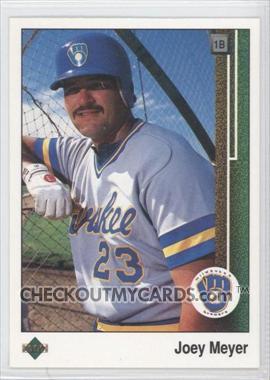 This seems like a fitting place to end this chapter. I would guess that Joey would like wish everyone a Happy Easter.