Some things to read while stocking up.

Apparently a game against the Astros was the cure for what ailed the Brewer pitching staff. Randy Wolf pitched seven scoreless innings last night, becoming the first Brewer to throw seven since Yovani Gallardo on May 1. The quality start was only Wolf's second in five appearances in May, and lowered his season ERA from 5.10 to 4.52.

Meanwhile, Wolf got some early help from Ryan Braun, who hit a long home run off the scoreboard in center in the first inning. Hit Tracker is listing the blast as 430 feet, but it certainly seemed longer. If 430 is accurate, it's Braun's second longest home run of the year.

That wasn't the only good news of the day for Braun: He's also the leading votegetter among NL outfielders in All Star balloting. If the game were played today Braun would be the only Brewer in the starting lineup, but Casey McGehee, Alcides Escobar, Rickie Weeks and Prince Fielder are all in the top three.

Speaking of good news, Stan Kyles rejoined the team last night ahead of schedule following prostate cancer surgery. The Brewers are now 10-13 when Kyles is with the team, and 8-14 when he's not.

The news is not as good for Doug Davis. He reportedly had chest pains again Monday night, and the timetable for his return is now uncertain.

The Brewers have won two games in a row, and Ken Macha would like you to focus on that and forget the fact that he's 98-109 as manager of the Brewers, and still nine games under .500 this season. Macha called it "poppycock" and refused to answer further questions from a reporter who asked about his job status yesterday. The reporter was Andy Kendeigh of WISN, who has video of the incident (h/t Colin Fly).

I'm not sure what's worse: The fact that a question about job security was enough to get Macha to essentially blackball a reporter, the fact that a "job on the line" question was the only time we've seen Macha show any level of emotion while this team crumbles around him, or the fact that he used the word "poppycock."

Even the Racing Sausages are considering other options at this point.

Trevor Hoffman didn't get into last night's game, but Ken Macha told reporters he'll make at least one more non-save appearance before the team considers moving him back into the closer's role.

Meanwhile, John Axford has made himself into a popular and productive part of the Brewer bullpen overnight. Disciples of Uecker has a look at Axford's stuff and concludes that The Ax could be an important piece of the bullpen, but likely wouldn't work as a full-time closer.

In his debut post at Beyond the Box Score, Lar considers the similarities in the early careers of Jayson Werth and Corey Hart, and suggests that Werth's level of productivity might be Hart's ceiling going forward. After reading that story, I checked out FanGraphs' new WAR Graphs feature and created this comparison: 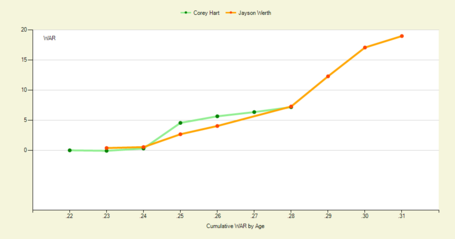 I'm hoping Lar is onto something.

In other notes at Beyond the Box Score, they have the first draft of their 2010 Catcher Defense Rankings up. Gregg Zaun ranks 64th among all catchers with -1.5 runs defensively, while George Kottaras is 57th with -0.7.

Is the NL Central race close to over? The B-Ref Blog says that four NL Central teams (the Brewers, Cubs, Pirates and Astros) are done.

The out clause in Chris Capuano's minor league deal will probably be a story every day until the Brewers announce what they plan to do. Brewed Sports says everyone should be fired if Cappy isn't called up. With that said, Capuano's isn't the team's only impending roster deadline:

Meanwhile, while the Brewers try to figure out what to do with these three pitchers, Baseball Brew wonders if they should also sign recent National releasee Brian Bruney.

On power rankings: SBNation has the Brewers 26th.

A quick correction from yesterday's Mug: Yesterday I reported that the Red Sox had DFA'd outfielder Darnell McDonald. Those reports turned out to be inaccurate - they DFA'd Atchison instead.

With the loss last night, Felipe Paulino dropped to 0-7. Earlier in the night, Braves starter Kenshin Kawakami also lost his seventh game. The two of them are baseball's first 0-7 pitchers since Barry Zito in 2008 (thanks, TheJay). Further proof of the irrelevance of wins: Both Kawakami (4.93) and Paulino (5.08) have lower ERAs than Derek Lowe (5.30), who is 6-4. (h/t to You Can't Predict Baseball, via Baseball Musings)

In case you're wondering, and you know you were, no Brewer starting pitcher has ever opened a season 0-7. The franchise record is five, set by ten noted luminaries. Baseball Musings thinks it's possible Felipe Paulino could lose 20 games.

Above I noted that the Brewers are doing relatively well in worthless popularity contests All Star Voting. It turns out, no one stuffs a ballot box quite like Philadelphia: If the All Star Game were played today, the Phillies would have two starting outfielders and three starting infielders. Two of those starters would be Shane Victorino, who has a .308 OBP, and Jimmy Rollins, who has only played in 12 games. Two other Phillies are in second place.

Today's baseball economics note comes once again from The Biz of Baseball, who looks at both sides of the argument that interleague play drives up ticket sales.

From the "sucks to be you" files: Tens of thousands of fans came to Garden Gnome night last night in Anaheim only to discover a shipping problem had prevented the gnomes from arriving.

Target Field hasn't been the weather disaster many of us thought it might be, but it did have its first squirrel delay last night.

Now if you'll excuse me, I need to find a new bus.