Or, for reasons that will soon become clear, I'm AKAing this one the "By the Power of Grayskull" edition.

Since last we met, YOUR Milwaukee Brewers scraped together a 3-3 homestand and then took to the road for a six-game West Coast swing. With the Randy Wolf - Dave Bush - Chris Narveson pu-pu platter going against the Angels, I was hoping to steal one game. Instead, the Crew swiped two before the Halos knew what him 'em, and the Brewers roll into Denver needing to win one game to ensure a .500 roadie. .500 is average, so you'd figure that the nullacctTM Managerometer holds steady at "Average" this week, right? 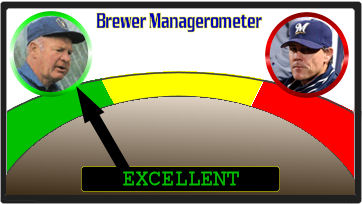 The reason for the spike in Ken Macha's Managero-rating, your weekly dose of @notkenmacha, and a special guest appearance are all just one click away.

This Week In "We're A Highly Influential Fan-Run Brewers' Blog": If you weren't locked in the shed last week, you'll of course remember that the most recent MACHAWATCH! suggested that Ken Macha make two moves, as soon as baseballingly possible:

(2) Get Jon Lucroy into the line-up with more regularity, e.g., give JL two starts for every three games started by George Kottaras.

Last Saturday, Macha announced that Gomez was going to hit no higher than sixth for the foreseeable future.

Including last night's loss to the Angels, Jon Lucroy has started three of the Brewers' last five games, and Macha said on Sunday that he was "leaning toward giving [Lucroy] the brunt of the work" behind the dish.

Please, there's no need to shower MACHAWATCH! with praise. We're doing this as a public service, and, since it's undeniably clear after this episode that WE HAVE THE POWER,* we'll open the floor for more suggestions.

* Completely tangential He-Man complaint: I was never a fan of Orko, primarily because he refused to show his face, but also because he frustrated the hell out of Man At Arms, who was the baddest mother in Masters of the Universe and had enough stress in his life without some little floating goblin screwing things up with stupid magic.

This Week in @notkenmacha: To make sure I wasn't reading too much into the skipper's decision to drop Gomez in the order and give Lucroy more run, I went to the source, @notkenmacha, and asked if K-Mach was actually taking MACHAWATCH!'s suggestions seriously:

Thanks for the interesting question. It is becoming clear to me that you are starting to grow as a writer and a human being with our increased interactions. Pretty soon you will be able to service your own garden hose without my help any longer! I so look forward to that day.

With regards to your question, I couldn't agree more, that the public's current fascination with Bob Seger is getting very out of hand. Bob Seger is single-handedly responsible for the rash of injuries, deaths, and uneven wood-floor wear, caused by people gliding across the floor in their underwear. It goes without saying, that the "Old Time Rock 'n Roll" is a horrible song, but what is ultimately the most troubling aspect of this song, is its call for older people to listen to, and subsequently enjoy music, somehow trying to rediscover their lost youth. If our Creator wanted us to stay youthful, he just would have made the lineup for Menudo the world's population minus the Hungarians. It really is as simple as that.

As we get older, music needs to be something we fall asleep to, not something that is to be enjoyed. The older generations need to prepare themselves for the icy grip of death, and music by artists such as Anne Murray, Danny O'Donnell and Coldplay is readily available to help the soon-to-expire become more at peace with their date with the Grim Reaper.

Furthermore, actual "Old Time Rock'n'Roll" is really starting to piss me off. I was watching "Antique Roadshow" the other day on the PBS, when all of a sudden those PBS sonofabitches in their corporate button down sweaters told me that I would have to watch some "Doo-Wop" bullshit show until I sent them enough money to put the "Roadshow" back on. Those dirty bastards. The show started with "The Marcels" blasphemous cover of "Blue Moon" -- I got my checkbook out as soon I as I could and prepared to send PBS a $100 check to put a stop to this madness, when the camera panned to the audience, and I saw the grossest collection of fat greasy scrotebags in biker jackets, with their even fatter trollops swinging their guts back and forth over the seats in front of them, to the off-tempo rhythm of "Blue Moon". Of course I added another zero to my check to make sure no one had to witness this monstrosity ever again.

Interestingly, I need to hold myself responsible a little for Bob Seger's growing popularity. Back in '72 I was called up by the Montreal Expos, right after I had finished playing catcher in the Mexican League. The long-time owner of the Expos, had recently passed away and left the team to his show-girl wife. She was intent on moving the Expos to a warmer climate, and signed me to be their back-up catcher, along with 24 other misfits -- hoping that we would lose enough ball-games so that the city of Montreal would let us out of our stadium lease. Of course, we had other plans, and a titillating floor display. In the last game of the season, we were scheduled to play Bob Seger and the Silver Bullet Band for first place in our division. When I met Bob Seger for the first time, I immediately knew that he was a wolfman, based on his scraggly facial hair and terrible odor. My plan was to beat his team, and then plunge a sharpened bat through his chest to send him back to the depths of Hungary.

In the bottom of the ninth, I came to bat facing that guy who makes that terrible noise with the saxophone in "Turn the Page" on the mound. We had a runner on second, and I was the Expos last chance to drive in the runner. Much like when Rusty Staub called his shot, I pointed out to the LF bleachers. The pitcher took exception, and threw a pitch at my head. I got back in the box, and instead of taking the pitcher deep, I laid down the best bunt in professional baseball since Spook Jacobs's epic roller back in '52 -- I could literally see the third baseman mouth "Oh Shit!!!". I headed down the first baseline as quickly as my sore knees would take me, and barely beat out the throw. However the Silver Bullets were so taken aback, that the runner on second was able to score. We won, but I had unfinished business with the wolfman Bob Seger. I grabbed my bat and knocked him on his ass, I was about ready to plunge my bat deep into his chest cavity when Boots Day yelled for me to stop. Normally, I would have went along with my business, but when the Bootster yells at you, you listen. Bob Seger walked away that day unscathed, and that is something I have to live with for the rest of my life.

Carlos Gomez should never bat 2nd in any lineup -- even in a lineup with Rickey Henderson and seven pitchers.

Well Richie, I hope this answers your question.

This Week in Special Guest Appearances: In case you haven't noticed -- and judging by the number of followers he has, you haven't -- @notrickpeterson has joined the skipper in the Twitter-verse. Since I can never seem to get a straight answer out of @notkenmacha, I thought I'd see if the pitching coach's thoughts were any more cogent. I asked whether he'd done anything special to prepare Dave Bush to face a solid Angels team. In exchange for a plug for his latest webinar, he obliged:

Thanks for stopping by, Ralphus. Let me put my hand on your shoulder for a moment and teach you something about being a pitching guru and webinar tycoon.

You see, my friend, I was just a young man when I saw my first windbreaker, and I knew right then I needed to find a job where I could wear one every day. So I became the best in the world at mentoring young men to become elite throwers of baseballs, so I could show up to work every day with my ridiculously tight pants and windbreaker and no one would say a word.

But sometimes, Ralphus, even the best need a little help. That's what happened on Monday (It was Monday, right?) when David and I were going through our pre-start ritual of staring into the mirror and practicing making stupid faces. But I could tell David's heart wasn't in it. I put my hand on his other shoulder and asked what was wrong.

"I'm just not feeling it today, Slickster," Bushie said. "But I think I know what'll fix it.

"I want to wear the jacket."

At first I was appalled. No one wears my jacket except me, mainly because I'm always wearing it. But then, I saw the genius. Nothing would make Bushie look stupid quite like wearing a jacket on an 80 degree day in Southern California. So I took it off, gave it to him and he set off on a walk to get us both some ice cream. And the son of a b#$%^ dripped Rocky Road on it.

That's where you come in, Ralphus. You're the delivery man for Ethel's Dry Cleaning Brothel on Harrison in Upper Sandusky, right? No? Then how the hell'd you get in here?