Share All sharing options for: What Baseball Fans And The MLB Can Learn From The World Cup

But seriously, if you've been paying attention to the World Cup - or avoiding it like the plague - you know that soccer fans can be a little crazy. That goes double for anyone who has read the Huffington Post lately. From their vuvuzelas to their drunken riots to their awesome hair, soccer fans (and soccer in general) may have a lot to offer the MLB and viewers like you!

The inclusion of women

Believe it or not, there is a FIFA Women's World Cup. It began in 1991, after FIFA president Jean-Marie Faustin Goedefroid de Havelange got the ball rolling. Like the other World Cup, the Women's WC is held every four years. China and the United States have each hosted the event twice, with the next one, in 2011, scheduled to be held in Germany.

But for the female baseball fans yearning to play, the closest we can really get it softball. I'm sorry, but softball just doesn't cut it. Sure, there was a professional girl's league in the past, and some girls can and choose to play in school, but the options are pretty limited.

The idea that players can be punished, in a traceable way, without being verbally warned or ejected right out is intriguing in any sport. In soccer, the issuing of cards is up to the referee. Knowing how often umpires (and other homo-sapiens) get things wrong, this could present a problem.

What kinds of situations could this be applied in, since baseball is not a direct contact sport? Just in pitching? If so, how do we determine if a pitcher is just having control issues and needs to be taken out or if he's trying to injure or hit the batter? And how would this affect sliding into bases during double plays?

Perhaps we should leave that idea alone.

Soccer fans know just about everything related to their clubs. You ask the average soccer fan to describe their team, and you'll be sitting down listening for hours to descriptions of the players, history of the team, projections, and other such nonsense. Not to say this isn't the case with many baseball fans... But there are also many who simply follow from the point they gained interest in the team forward. And it's not because they don't care about the team's past, but because they're not as invested in the team as, say, a Manchester United fan might be.

Even more than that, many also know as much about their national team. While we did have a national team participating in the Summer Olympics prior to 2008, baseball (and softball) have since been eliminated. There is still a national team for the US, along with an all-female team, but they really don't get a lot of coverage. Honestly, prior to this post, I didn't even know that either existed. I don't even think I need to expand on that point.

Soccer fans, much like Packers fans, participate in all sorts of oddball activities. Not to say that baseball fans don't - we've all seen the Green Man present at various games. When I think of the overboard Packers fans, I think of the guys who get super plastered during tailgating, are shirtless despite the beer gut and low temperatures, and like to paint their faces and wear cheese helmets. The overboard soccer fan is similar in nature. This majestic creature tends to be slimmer and more fit than their Green Bay counterparts, and possibly even more interested in drinking. While this type of fan would be annoying to have at baseball games, they would also increase the hotness level of the crowd and bring in more revenue for any team.

Aside from the Florida Marlins male cheerleading squad, the Manatees, and their female counterparts, the Mermaids, there really isn't a lot of dancing in baseball (well actually, a few teams have cheerleaders now, but nothing will ever top the Manatees). 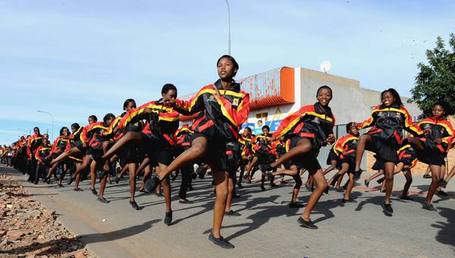 Some World Cup dancers, being awesome.

You know, it's not like I don't love me some Remetee... But it's not for everyone. Honestly, if I went out in one, there'd be no end to the comments I'd get. Instead of the team dressing like individuals during travel, soccer teams usually dress pretty snazzy. 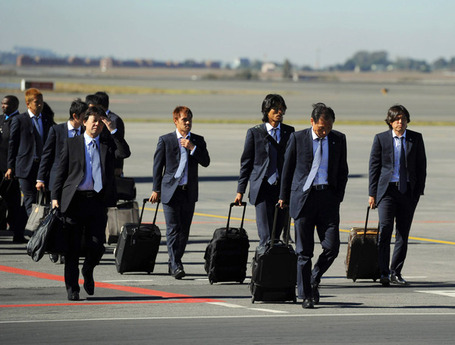 See how put-together they look? How much they look like a team?

And last, but certainly not least, we have vuvuzelas. If you've watched any of the World Cup games, you'll be familiar with that amazing synthetic bumble bee sound. 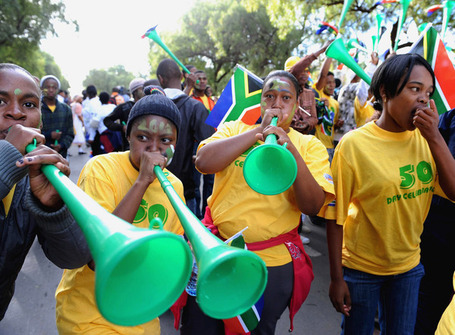 South Africans playing their favorite instrument in honor of the World Cup.

Most non-soccer fans seem to hate vuvuzelas. I honestly don't know why. Vuvuzelas not only look cool and come in a variety of colors, but there are a number of ways to play it. Take that, air horns.

All pictures used are brought to you by BCB's awesome hook up with AP/Getty Images.

Also, I am in no way responsible for you blowing out your eardrums trying to learn how to play the vuvuzela.