Welcome back, my friends, to the show that was scheduled to end about four weeks ago. But the Ken Macha Express rolls on, and, so, too, does MACHAWATCH!

In their last 10 games, the Brewers are 6-4, which I suppose qualifies as BIG TIME STUFF in this wasted season. Still, we're languishing at eight games below .500, trading paint with the Baby Bears in the middle of the NL Central, and, thus, the nullacct ManagerometerTM returns to the middle: 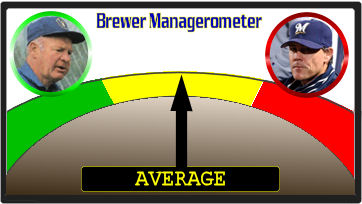 After the jump, goodies galore: a new plea to the skipper, where K-Mach stands in the manager hot seat rankings, and, of course, @notkenmacha.

This Week in Toasted Skippers: With Fredi Gonzalez getting gassed in Florida*, the list of managers on the hot seat got a bit shorter. We've lost Trey Hillman and Dave Trembley already this season. Here's one man's take on the skippers who are still hanging on:

1. Ozzie Guillen, CWS -- the ChiSox are only 2.5 games out of first, and they've won nine in a row, but I think Guillen gets canned if they hit another sustained cold stretch.

2. John Russell, PIT -- I know, I know, he got a clandestine contract extension over the winter, but that dirty laundry has been aired now ... and ohbytheway the Buccos recently lost 12 in a row, and have fallen 21 games under .500 before July.

4. A.J. Hinch, ARI -- because the Diamondbacks are freaking awful. No other way to put it. And I'm still not sure why he got hired in the first place.

5. Jerry Manuel, NYM -- but he looks a lot more secure than he did a month ago, what with the Mets ripping off 21 wins in their last 28 games and all.

6. Don Wakamatsu, SEA -- Wakamatsu's situation is comparable to Macha's -- team expected to contend, hovering 10 games below .500 in June -- except that the M's won 87 games last year. I think he makes it through the year.

This Week in "Don't Break the Ax": Because I can't think of a longer, more eloquent way to say this, lemme get right to it:

It seems very likely that, despite the reprieve he was given by Mark Attanasio some weeks back, Ken Macha is not going to be with the Milwaukee Brewers next year.

It seems very likely that impressively-mustachioed closer John Axford is going to be with the Milwaukee Brewers next year.

My plea to the skipper: please, please do not continue to abuse John Axford the way you did last night -- making him throw twenty-some pitches the day after he threw 31 pitches in two high-pressure innings -- in some misguided and ultimately hopeless attempt to save your job.

This Week in @notkenmacha: I was surprised to learn that Ken Macha's approval rating had crept above 20% in this week's version of the tracking poll. Was @notkenmacha surprised by this surge in popularity? I had to know:

Thanks for your question, of course you probably are ignorant to this, but being popular is so much more important than being morally upright, or being skilled at a trade. In fact these days, when children ask me if they should do drugs, I respond to them "Will it make you popular? If so, then you have your answer."

It may surprise you to know that there was a time in my life where I dedicated myself to the betterment of humanity instead of whoring myself to the John that is popularity. My first love in life was not baseball, but was in fact international soccer. Back in March of '38 I traveled, as a young man to Paris France to watch the third stage of the World Cup. I was pretty ambivalent about who would win, because I was there primarily to enjoy soccer in its purest form, and urinate on the Leaning Tower of Pisa.

After all the elimination games were completed, only the Italians and Hungarians were left to play for the World's greatest trophy. Of course, I have had a long-standing difficulty with the Hungarians -- which I would love to expound on, but it would tend to only make this story even more pointless and drawn-out, so I will save that lesson for another day. Getting back on track -- I wasn't a fan of the Hungarians, but no one liked Italians in the late '30's either, so I was a bit conflicted on who I was about to root for. All of that changed though, once I learned that the Italian government sent their team a telegram, informing them that they planned on formally executing them if they didn't win the gold. As I was a young and naive man, (and not worried about being popular) I ran zig-zag-alligator-evasive style to the Hungarian locker-room to plead with the Hungarians to throw the match to allow the Italians to win the match, but not lose their lives. Upon recollection, it may have been a better decision to sprint in a straight line to the locker-room, as when I arrived the Hungarians had left the locker-room, and only the goalie remained.

I spoke only rudimentary Hungarian, but I was able to communicate to the goalie that the Italian team was in danger of execution. I was appalled to listen to the Hungarian goalie as he rambled on about some sort of "Italian national slogan" that "lost some meaning in translation". Not wanting any blood on my hands, I knew what I needed to do. I calmly caved the goalie's skull in with a roll of duct-tape and a can of WD-40 (which I keep on my person at all times for repairing broken items), and dumped his body down the facility's laundry chute. As quickly as I was able, I donned the Hungarian uniform and prepared myself to keep their goal.

It goes without saying, that I could have shut down the Italians, but because I was interested in preserving life, instead of being popular, I let them score 4 goals, so they could take the trophy home to their homeland, and live to play soccer another day.

After that incident, it became clear to me, that I could never enjoy soccer again, and more importantly I needed to do what was popular, and not what was good for my fellow man, or the world at large. It was evident to me that I should pursue baseball, and also ensure that the Hungarians never would claim victory in the World Cup.

I was successful in getting the World Cup shut down in 1942 and 1946, with some well-written, and terse letters to people in charge of the FIFA, but in 1950 I had to travel to Switzerland to prevent the upstart Hungarians from winning the World Cup -- but that's another story for another day.